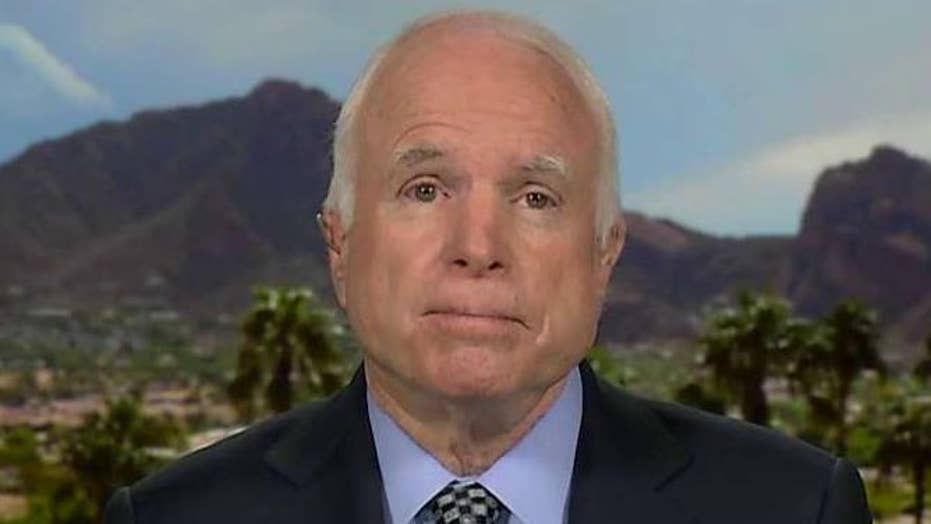 McCain: US must not tolerate bad behavior by rogue nations

South Korea said Thursday that it would restart propaganda broadcasts seen as an act of war by North Korea in response to Pyongyang's fourth nuclear test. Seoul also began talks with Washington that could see the arrival of nuclear-powered U.S. aircraft and submarines to the Korean Peninsula.

South Korea's presidential office announced that the cross-border broadcasts would start Friday, two days after North Korea claimed to have tested a "miniaturized" hydrogen bomb, a claim that has been disputed by outside governments and experts.

The announcement came after the White House said the United States, South Korea and Japan had "agreed to work together to forge a united and strong international response to North Korea's latest reckless behavior."

Ministry officials refused to elaborate about what U.S. military assets were under consideration, but they likely refer to B-52 bombers, F-22 stealth fighters and nuclear-powered submarines.

When animosities sharply rose in the spring of 2013 following North Korea's third nuclear test, the U.S. took the unusual step of sending its most powerful warplanes -- B-2 stealth bombers, F-22 stealth fighters and B-52 bombers -- to drills with South Korea in a show of force. B-2 and B-52 bombers are capable of delivering nuclear weapons.

South Korea also said Thursday it will limit entry to a jointly run factory park in North Korea, the last major symbol of inter-Korean cooperation. The park's operation won't likely be affected much as the restriction will apply to clients, potential buyers and service providers from South Korea, rather than managers who commute to work with North Korean laborers.

It may take weeks or longer to confirm or contradict the North's claim that it successfully tested a hydrogen bomb, which would mark a major and unanticipated advance for its still-limited nuclear arsenal. Even a test of a less sophisticated atomic bomb would push its scientists and engineers closer to their goal of building a warhead small enough to place on a missile that can reach the U.S. mainland.

But an early analysis by the U.S. government was "not consistent with the claims that the regime has made of a successful hydrogen bomb test," White House spokesman Josh Earnest said.

He added that nothing had happened in the last 24 hours to change Washington's assessment of Pyongyang's technical or military capabilities.

South Korea's spy agency told lawmakers that it thought the estimated explosive yield from the blast was much smaller than what even a failed hydrogen bomb detonation would produce.

Some believe North Korea might have detonated a boosted fission bomb, a weapon considered halfway between an atomic bomb and an H-bomb.

But even if the North exploded a boosted fission bomb, its explosive yield, estimated at 6.0 kilotons, showed the test was likely a failure, Seoul's Defense Ministry official said Thursday. An explosion two to five times more powerful would have been reported if it were successful, a ministry official said, requesting anonymity citing department rules.

After the North's 2013 test, a yield of 6-7 kilotons was estimated, according to South Korean officials.

On Wednesday, the United Nations Security Council held an emergency session and pledged to swiftly pursue new sanctions against North Korea, saying its test was a 'clear violation' of previous U.N. resolutions.

Four rounds of U.N. sanctions have aimed at reining in the North's nuclear and missile development programs, but Pyongyang has ignored them and moved ahead to modernize its ballistic missiles and nuclear weapons.