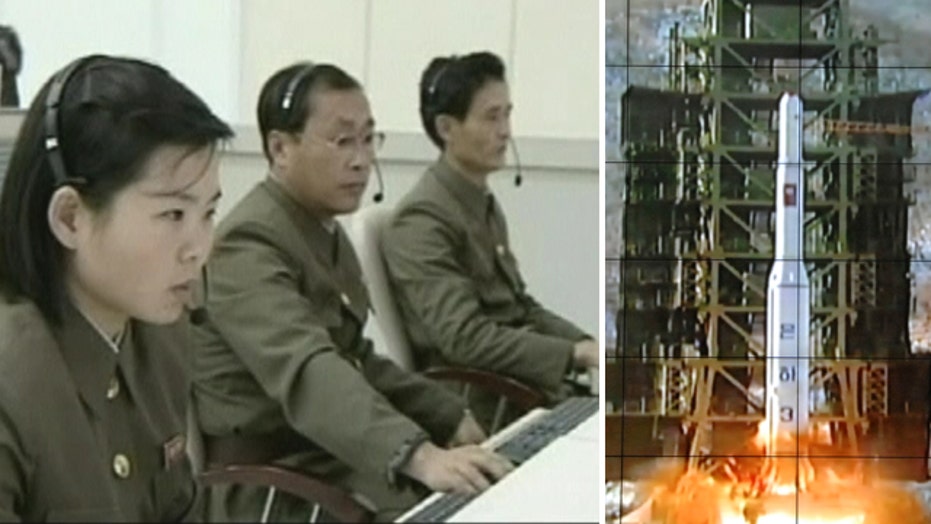 South Korea said Thursday a rocket successfully launched into orbit by North Korea appears to be orbiting the Earth normally, but the country says it does not know whether the rocket is functioning properly.

South Korean Defense Ministry spokesman Kim Min-seok told reporters  that the satellite is orbiting at a speed of 4.7 miles per second but it's not known what mission it is performing. He says it takes two weeks to determine whether a satellite works successfully after liftoff.

The news comes after a defiant North Korea released images and control room footage of the feat, which the U.S. and other nations have labeled a "provocative" act.

The rogue regime fired the long-range rocket into space Wednesday, defying international warnings and taking a major step forward in its quest to develop a nuclear missile. While the stated purpose was to put a weather satellite into orbit, the three-stage rocket's deployment also demonstrates the nation's ability to send a nuclear warhead as far as California, and raises the stakes in the international standoff over North Korea's expanding atomic arsenal.

"The satellite has entered the planned orbit," a North Korean television news reader announced, after which the station played patriotic songs with the lyrics "Chosun (Korea) does what it says."

The North American Aerospace Defense Command (NORAD) later confirmed that the nation had "deployed an object that appeared to achieve orbit."

Video and photos released by the state-run Korean Central News Agency showed the launch from snowy terrain and its fiery flight skyward, mission control workers in a monitoring room, jubilant government workers and citizens and stern-looking government officials huddled around a conference table. The photos appear to have been intended as a follow-up to the launch itself - a defiant thumb in the eye of the world.

North Korea is banned from developing nuclear and missile-related technology under U.N. resolutions. But its defiance continues under Kim Jong-un, who rose to power a year ago after the death of his father, Kim Jong-Il.

The White House called the launch a "highly provocative act that threatens regional security," and even the North's most important ally, China, expressed regret. The U.N. Security Council on Wednesday condemned North Korea's successful rocket launch, saying it violated a 2009 council resolution banning "any launch using ballistic missile technology." The U.N.'s most powerful body said in a brief statement after closed consultations that it will consider "an appropriate response."

In Pyongyang, however, pride over the scientific advancement outweighed the fear of greater international isolation and punishment. North Korea, though struggling to feed its people, is now one of the few countries to have successfully launched a working satellite into space from its own soil; bitter rival South Korea is not on the list, though it has tried.

"It's really good news," North Korean citizen Jon Il Gwang told The Associated Press as he and scores of other Pyongyang residents poured into the streets after a noon announcement to celebrate the launch by dancing in the snow. "It clearly testifies that our country has the capability to enter into space."

Wednesday's launch was North Korea's fourth bid since 1998. An April launch failed in the first of three stages, raising doubts among outside observers whether North Korea could fix what was wrong in just eight months, but those doubts were erased Wednesday.

The Unha rocket, named after the Korean word for "galaxy," blasted off from the Sohae launch pad in Tongchang-ri, northwest of Pyongyang, shortly before 10 a.m., just three days after North Korea indicated that technical problems might delay the launch.

A South Korean destroyer patrolling the waters west of the Korean Peninsula immediately detected the launch. Japanese officials said the first rocket stage fell into the Yellow Sea and a second stage fell into the Philippine Sea hundreds of miles farther south.

The North American Aerospace Defense Command confirmed that "initial indications are that the missile deployed an object that appeared to achieve orbit."

In an indication that North Korea's leadership was worried about the success of the launch, the plan was kept quiet inside North Korea until a special noon broadcast on state TV declared the launch a success. Pyongyang was much more open during its last attempt in April, and even took the unusual step of inviting scores of foreign journalists for the occasion, but that rocket splintered shortly after takeoff.

At one hotel bar Wednesday, North Koreans watched raptly, cheering and applauding at the close of the brief broadcast. As vans mounted with loudspeakers drove around the capital announcing the news, North Koreans bundled up in parkas ran outside to celebrate.

Pyongyang did not immediately release images of the launch, but hours later Associated Press reporters at the Pyongyang satellite command center viewed a playback showing the rocket blasting off against a snowy backdrop in the northwest. The white rocket was emblazoned with the name "Unha-3" and the North Korean flag.

Space officials say the rocket is meant to send a satellite into orbit to study crops and weather patterns.

But the launch could leave Pyongyang even more isolated and cut off from much-needed aid and trade.

The U.N. imposed two rounds of sanctions following nuclear tests in 2006 and 2009 and ordered the North not to conduct any launches using ballistic missile technology. Pyongyang maintains its right to develop a civilian space program, saying the satellite will send back crucial scientific data.

"The United States remains vigilant in the face of North Korean provocations and fully committed to the security of our allies in the region," Vietor said in a statement. "Given this current threat to regional security, the United States will strengthen and increase our close coordination with allies and partners."

Vietor said the international community must "send a clear message that its violations of U.N. Security Council resolutions have consequences."

China expressed its unhappiness but called for a moderate response from the United Nations.

"We express regret at (North Korea's) launch in spite of the extensive concerns of the international community," Foreign Ministry spokesman Hong Lei told reporters. He added that China "believes U.N. Security Council reaction should be prudent and moderate and conducive to maintaining stability and avoiding escalation of the situation."

Hong said dialogue and negotiations are the way forward.

North Korea's Foreign Ministry accused the U.S. of overreacting to the launch "out of hostile feelings."

"We hope that all countries concerned will use reason and remain cool so as to prevent the situation from developing to undesirable direction," the official Korean Central News Agency quoted a ministry spokesman as saying. The spokesman said the country will "continue to exercise our legitimate right to launch satellites."

But North Korea also defends its need to build nuclear weapons, citing the U.S. military threat in the region, and rocket tests are seen as crucial to advancing its technology.

Pyongyang is thought to have a handful of rudimentary nuclear bombs. It followed up a failed 2009 launch with a nuclear test, and announced it would begin enriching uranium, which would provide a second source of atomic material.

Experts believe the North lacks the ability to make a warhead small enough to mount on a missile that could threaten the United States, but Wednesday's launch marks a milestone in its decades-long effort to perfect a multistage, long-range rocket capable of carrying such a device.

This launch will help the North Koreans map out what kind of delivery vehicle they would need for a nuclear warhead, said retired Air Force Col. Cedric Leighton, a weapons expert and intelligence analyst.

There are concerns as well that Pyongyang may sell its technology to other nations such as Iran, which has rockets bearing a striking similarity to those made by North Korea, according to the James Martin Center for Nonproliferation Studies.

Chae Yeon-seok, a rocket expert at South Korea's state-run Korea Aerospace Research Institute, said North Korea is now likely to focus on developing bigger rockets with heavier payloads. "Its ultimate aim will be putting a nuclear warhead on the tip."

For North Koreans, Wednesday's launch caps a heady year of milestones: the centenary of the birth of Kim Il Sung, the nation's founder, and the inaugural year of leadership under his grandson, Kim Jong Un. And on Dec. 17, North Korea will mark the anniversary of the death of leader Kim Jong Il.

"How happy would our General (Kim Jong Il) have been," Pyongyang resident Rim Un Hui said. "I'm confident that our country will be stronger and more prosperous under the leadership of Kim Jong Un."