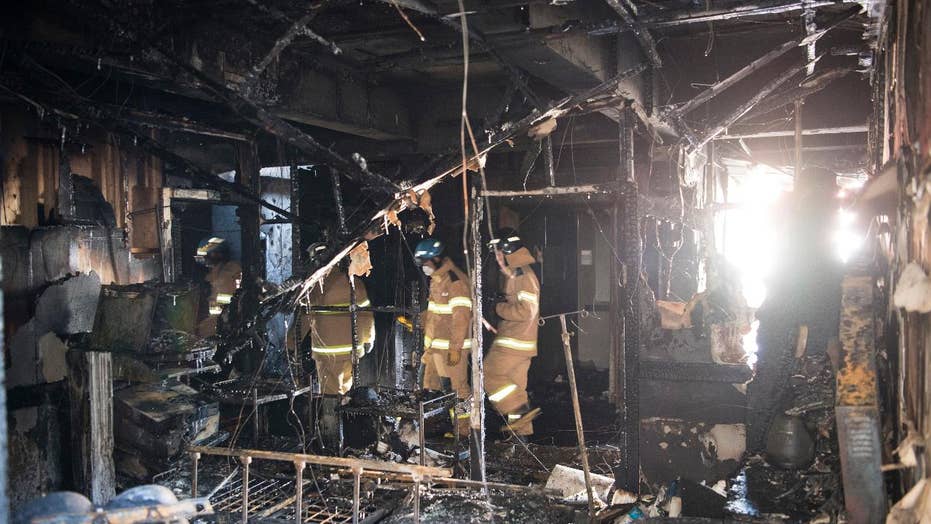 President Moon called for a probe of the fire.

Eyewitness accounts of the fire that engulfed a South Korean hospital and nursing home early Friday—which killed at least 37 people and injured more than 100 others—revealed the chaos of rescue efforts as firefighters fought against the spreading smoke and flames.

The fire started on the first floor of Sejong Hospital’s emergency room and by the time firefighters arrived the whole first floor had been engulfed, forcing them to rescue the trapped patients through the second-story windows, said Choi Man-wu, a fire official in the city of Miryang.

Videos posted on social media showed patients going through extreme lengths to escape the blaze, with one patient gripping a rope that dangled from a helicopter, and another crawling out of a window and down a ladder, the Bangkok Post reported.

Local TV networks showed video of heavy black smoke rising out of the hospital and engulfing its entire structure.

“There was so much smoke that it was hard for people to approach (the building),” a bystander told a local TV station. “Even from 10 meters away, it was frightening.”

The Korea Herald reported reactions to the incident from social media.

The 37 dead were from the hospital’s general ward, while the 94 elderly patients being cared for in the nursing ward were safely evacuated, with some being carried out on the backs of firefighters, Choi said.

Most of the deaths appeared to be due to suffocation, with only one suffering burns, said an official at the National Fire Agency. Officials were working on identifying the dead, he said.

"There was so much smoke that it was hard for people to approach (the building),” a bystander told a local TV station. (AP)

The fire was extinguished before it could reach the third floor. The cause of the fire wasn’t immediately known.

In a televised briefing Friday afternoon, the head of the foundation that operates the hospital, Son Kyung-cheol said the hospital did not have sprinklers installed as it was not legally required.

Most of the deaths appeared to be due to suffocation, with only one suffering burns, said an official at the National Fire Agency. (AP)

President Moon Jae-in called an emergency meeting with his senior advisers and expressed regret over the blaze. He ordered officials to investigate the exact cause of the fire and work out measures to prevent future fires, according to his spokesman Park Su-hyun.

The incident at Sejong Hospital was the most recent in a string of deadly fires, calling into question the country’s safety measures.

In late December, 29 people were killed in a building fire in central Seoul, which was the country's deadliest blaze over the past decade before the hospital fire. Last weekend, a fire at a Seoul motel killed six people, and police arrested a man who allegedly set it ablaze in anger because he had been denied a room for being heavily drunk.

In 2014, a fire set by an 81-year-old dementia patient killed 21 at another hospital for the elderly.