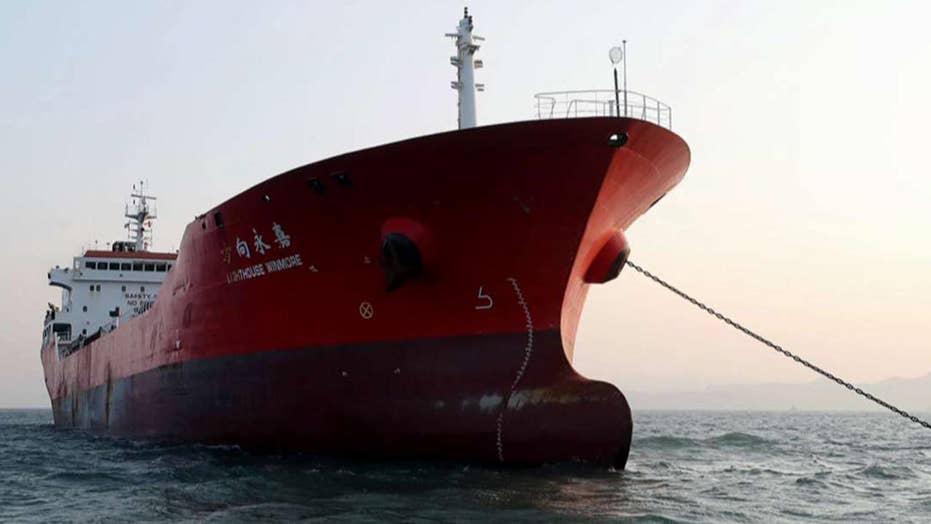 The Lighthouse Winmore is accused of transferring oil to a North Korean vessel in violation of U.N. sanctions; Lucas Tomlinson reports from the Pentagon.

The crew of a Hong Kong-flagged ship that allegedly violated U.N. sanctions by transferring oil to a North Korean vessel in October is being held in South Korea until a full inspection is sent to the Security Council, officials announced Friday.

The Lighthouse Winmore is believed to have transferred about 600 tons of refined petroleum products to the North Korean ship, the Sam Jong 2, in international waters in the East China Sea on Oct. 19, after leaving the South Korean port of Yeosu, a South Korean Foreign Ministry official told the Associated Press.

The announcement came on the same day Defense Secretary James Mattis told Fox News that he believes the world will exert “increased pressure” on North Korea in the coming months following the recent maritime incidents.

South Korean customs authorities said they boarded the ship and interviewed crew members after they returned to Yeosu on Nov. 24. South Korea formally seized the ship after the U.N. Security Council on Dec. 22 imposed new sanctions on North Korea that allow member states to seize, inspect and freeze vessels that are suspected of transferring banned goods to or from North Korea, the official said. He spoke to the Associated Press on condition of anonymity, citing office rules.

The ship's 25 crew members — 23 of them Chinese nationals and two from Myanmar — are being held at Yeosu but will be allowed to leave South Korea after authorities are finished investigating them, the official said. South Korea plans to report the results of its inspection to the U.N. Security Council's sanctions committee.

The ship, which also transferred oil to three other non-North Korean ships, was chartered by Taiwan's Billions Bunker Group and stopped in South Korea to load up about 14,000 tons of Japanese oil products. It claimed its destination as Taiwan when leaving Yeosu on Oct. 15, the official said.

The official said it hadn't been confirmed whether the Sam Jong 2 returned to North Korea after receiving oil from the Lighthouse Winmore.

North Korea has come under heavy sanctions imposed by the U.N. Security Council as it accelerated efforts to expand its nuclear weapons and ballistic missiles program. In recent months, the North conducted its most powerful nuclear test to date and flight-tested intercontinental ballistic missiles three times, raising concerns it's closer than ever toward gaining a military arsenal that can viably target the United States.

Ship-to-ship trade with North Korea at sea is prohibited under U.N. sanctions adopted on Sept. 11.

Trump said on Twitter that China had been "Caught RED HANDED," adding that he was "very disappointed that China is allowing oil to go into North Korea."

China accounts for the vast majority of North Korea's external trade and oil supplies, according to the Associated Press.