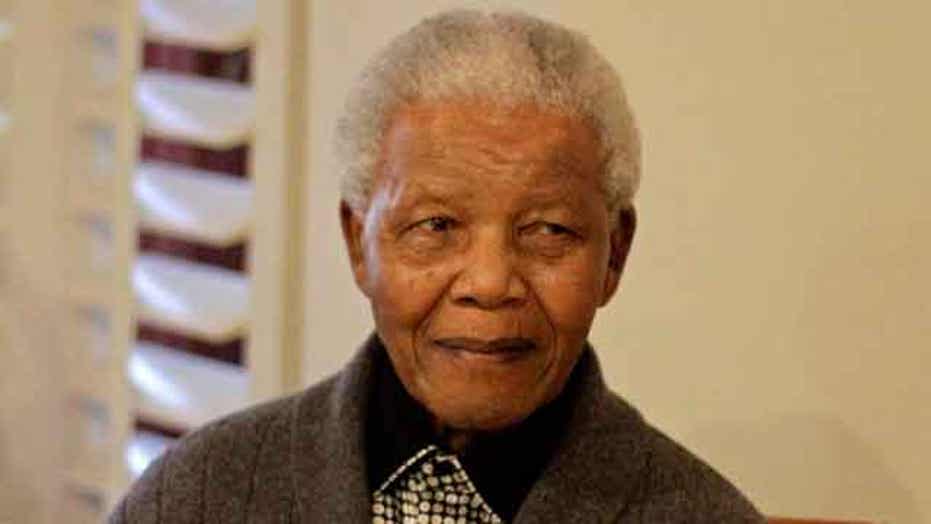 Nelson Mandela back in the hospital

William Schaffner, MD, with an outlook on the seriousness of Nelson Mandela's current health condition

A lung infection that has plagued Nelson Mandela has struck again, prompting doctors to admit the 94-year-old former president to a hospital late at night.

The Nobel laureate was admitted late Wednesday to a hospital in Pretoria, the South African capital, in the latest in a series of such trips since last year. He has been particularly vulnerable to respiratory problems. Mandela, who became South Africa's first black president in 1994, contracted tuberculosis during his 27-year imprisonment for fighting white racist rule in his country.

"The doctors advise that former President Nelson Mandela is responding positively to the treatment he is undergoing for a recurring lung infection," the presidency said in a statement. "He remains under treatment and observation in hospital."

South Africa's presidential office thanked the media and the public for their cooperation in respecting the privacy of Mandela and his family.

Mandela is a revered figure in South Africa, which has honored his legacy of reconciliation by naming buildings and other places after him and printing his image on national banknotes.

"I'm so sorry. I'm sad," Obed Mokwana, a Johannesburg resident, said after hearing that Mandela was back in a hospital. "I just try to pray all the time. He must come very strong again."

Earlier this month, Mandela spent a night in a hospital for what authorities said was a scheduled medical test.

"No, this wasn't scheduled, as you will appreciate the doctors do work with a great sense of caution when they are treating Madiba and take into account his age," he said. "And so when they found that this lung infection had reoccurred, they decided to have him immediately hospitalized so that he can receive the best treatment."

In December, Mandela spent three weeks in a hospital in Pretoria, where he was treated for a lung infection and had a procedure to remove gallstones.

Speaking before the news that Mandela was responding well to treatment, Maharaj acknowledged there was cause for worry, but said the medical specialists treating Mandela were very competent.

"With Madiba and a person of his age, there always has to be concern and therefore the doctors, I think we need to appreciate, will prefer to work on the side of caution rather than taking any risks," he said from the coastal city of Durban.

He said there had been a global outpouring of messages expressing concern for Mandela's health.

"We appeal to the people of South Africa and the world to pray for our beloved Madiba and his family and to keep them in their thoughts. We have full confidence in the medical team and know that they will do everything possible to ensure recovery," his office quoted him as saying.

In February 2012, Mandela spent a night in a hospital for minor diagnostic surgery to determine the cause of an abdominal complaint. In January 2011, he was admitted to a Johannesburg hospital for what officials initially described as tests but what turned out to be an acute respiratory infection. He was discharged days later.

He also had surgery for an enlarged prostate gland in 1985.

The apartheid government released Mandela in 1990. He later became the nation's first democratically elected president under the banner of the African National Congress, helping to negotiate a relatively peaceful end to apartheid despite fears of much greater bloodshed. He served one five-year term as president before retiring.

Perceived successes during Mandela's tenure include the introduction of a constitution with robust protections for individual rights and the Truth and Reconciliation Commission, a panel that heard testimony about apartheid-era violations of human rights as a kind of national therapy session.

South Africa, however, still struggles with crime, economic inequality and other social ills.

Mandela last made a public appearance on a major stage when South Africa hosted the 2010 World Cup soccer tournament.

He had spent more time in the rural village of Qunu in Eastern Cape province, where he grew up. He was visited there in August by Hillary Clinton, who was U.S. secretary of state at the time.

Doctors said in December that he should remain at his home in the Johannesburg neighborhood of Houghton for the time being to be close to medical facilities that can provide the care he needs.