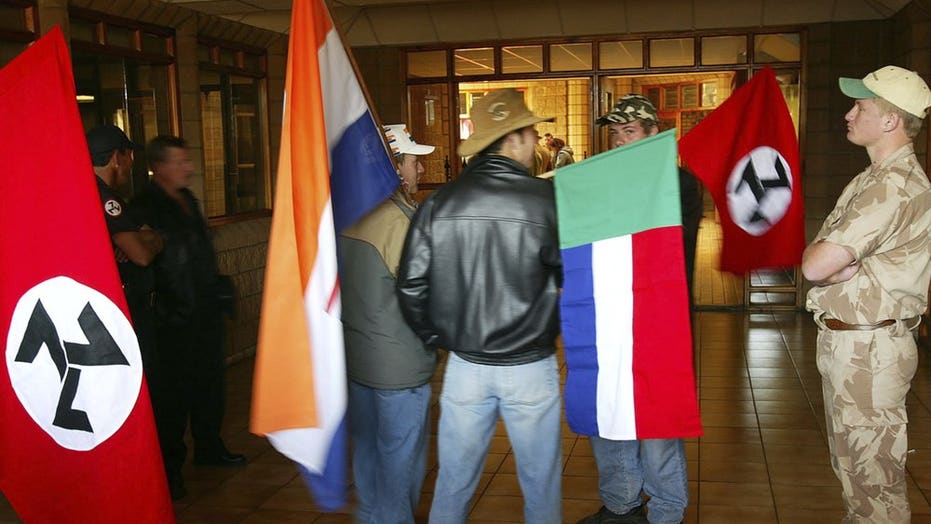 Judge Phineas Mojapelo said the ruling doesn’t mean an outright ban of the flag, which can continue to be used for artistic, academic, journalistic or other purposes deemed in the public interest.

South Africa's Equality Court has restricted the display of the old apartheid-era flag in a ruling that it's gratuitous use amounts to hate speech and racial discrimination. (AP Photo/Schalk van Zuydam)

But the judge criticized those who continued deliberately to wave the apartheid-era flag, saying such people are perpetuating oppression.

He added that individuals displaying the flag shouldn’t face arrest, but instead be subjected to fines or terms of community service.

The orange, white and blue flag of South Africa’s previous white-minority regime, which enforced the system of racial discrimination known as apartheid, was replaced by a new flag when the country abandoned the system and achieved majority-rule democracy in 1994.

Some conservative and right-wing groups have retained the apartheid-era flag, especially at certain political gatherings or rugby matches.

The court’s ruling comes after the Nelson Mandela Foundation, the custodian of the former president's archives and legacy, asked the court to rule whether the old flag constitutes discrimination based on race.

Supporters of the Afrikaner Resistance Movement (AWB) display an old South African flag, second from left, an old Afrikaner "Vierkleur" flag and swastika-like flags as they await the release of their leader, Eugene Terre'Blanche from prison in Potchefstroom, South Africa where he was granted parole after serving three years of an effective five year sentence for the 1996 attempted murder of a black security guard. (AP Photo)

The efforts to ban the flag were opposed by Afriforum, a group representing South Africa’s white Afrikaner minority. The group argued that the ban would infringe freedom of speech and expression.

Dakota Legoete, the spokesman for South Africa’s ruling party, the African National Congress, hailed the ruling as a “national victory,” comparing it to the banning of the Nazi swastika in Germany.

“The judge was clear that we have to work together with others, including Afriforum, to do what the constitution says we must do,” Mandela Foundation CEO Sello Hatang said. “We must be a nation that celebrates our diversity instead of fighting over our differences."