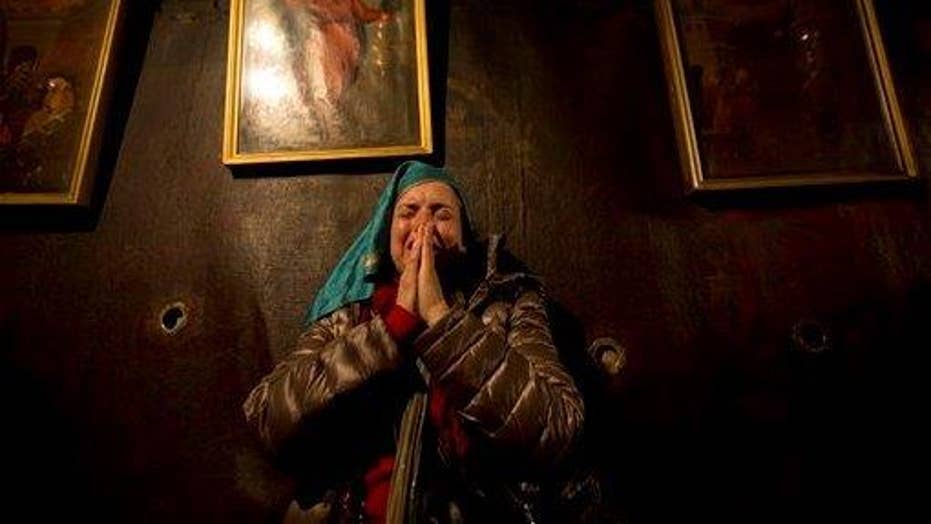 Despite months of violence between Israelis and Palestinians, the largest Christmas Eve celebration in Bethlehem went on as planned Thursday, though crowds were reportedly thinner than in years past.

The annual festivities in Manger Square was held as usual, but other celebrations in the city were canceled or toned down. Earlier Thursday, Israeli authorities said three Palestinian assailants were killed as they carried out or tried to carry out stabbing or car-ramming attacks against Israeli security personnel elsewhere in the West Bank, and a fourth Palestinian was killed in clashes with Israeli troops, a Palestinian hospital official said. Two Israeli security guards and a soldier were wounded.

"There's lights, there's carols, but there's an underlying sense of tension," Paul Haines of Cornwall, England, who arrived in Bethlehem following a four-month trek from Rome, told the Associated Press.

Lisette Rossman, a 22-year-old student from Albuquerque, New Mexico, said the violence made her think twice about visiting a friend studying in Jerusalem. She said she was glad she made the trip because "it was one of my dreams to come here."

In Manger Square, local activists placed an olive tree they said was uprooted by the Israeli army in a nearby village, and surrounded it with barbed wire and decorated it with spent tear gas canisters fired by Israeli troops and photographs of Palestinians killed or arrested in recent violence.

"We're in Bethlehem celebrating Christmas, celebrating the birthday of our lord Jesus Christ. This is the birthplace of the king of peace, so what we want is peace," said Rula Maayah, the Palestinian tourism minister.

But at 9 p.m., traditionally a bustling time of the evening, there were few tourists to drink local wine sold on the square or to eat freshly fried falafel.

As the festivities got underway, Miral Siriani, a 35-year-old publicist from Jerusalem, said she was relieved to get a break from three months of tension that has included numerous attacks in her city.

"I feel safe in Bethlehem," she said.

In recent years, Bethlehem had enjoyed a relative calm and thousands of revelers and pilgrims poured into Manger Square each Christmas. But vendors and hotel owners complained of sagging business this Christmas season.

Xavier Abu Eid, a Palestinian official, said hotel bookings were down 25 percent from last year, which itself was weak following a war between Israel and Palestinian militants in the Gaza Strip several months earlier.

Some Palestinians hoped holiday cheer would replace the gloom. Said Nustas, dressed in a Santa Claus suit, rang a Christmas bell on a narrow asphalt street as he prepared to deliver gifts from a toy store to children nearby.

"The situation is what it is, a war and intifada," Nustas said. "But God willing, we'll overcome it and celebrate."

Latin Patriarch Fouad Twal led a procession from his Jerusalem headquarters into Bethlehem, passing through a military checkpoint and past Israel's concrete separation barrier, which surrounds much of the town.

Israel built the barrier a decade ago to stop a wave of suicide bombings. Palestinians say the structure has stifled Bethlehem's economy.

In Bethlehem, Twal wished "peace and love" for all.

Twal led worshippers in a Midnight Mass at the Church of the Nativity, built atop the spot where Jesus was born.

In his homily, Twal expressed sympathy for the plight of Palestinians, Syrian refugees and "victims of all forms of terrorism everywhere," according to a transcript issued by his office. He wished "all inhabitants of the Holy Land" a happy and healthy new year.

"We pray to change the face of the world, that our world be a safe dwelling place and refuge, where justice prevails over rivalry and conflict, mercy over vengeance, charity over hatred," he said.