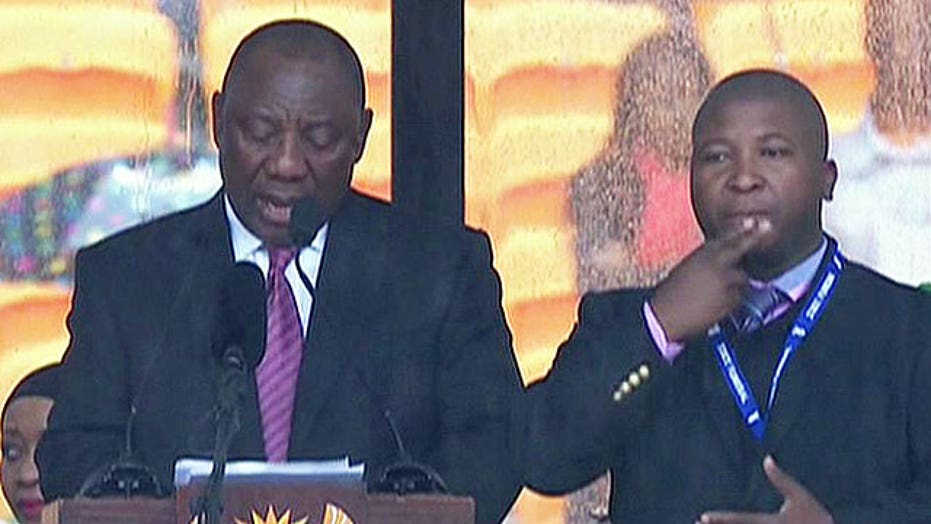 A man being criticized by sign language experts for providing fake interpretations while standing close to President Obama and other heads of state at Nelson Mandela’s memorial says he becomes violent “a lot” and was hallucinating during the event.

Thamsanqa Jantjie did not describe his qualifications for being a sign language interpreter, but told The Star he works for an interpreting company that paid him $85 for working Tuesday's event, according to The Associated Press. He told Radio 702 on Thursday he's receiving treatment for schizophrenia and had an episode while on stage at FNB Stadium in Johannesburg.

"What happened that day, I see angels come to the stadium ... I start realizing that the problem is here. And the problem, I don't know the attack of this problem, how will it come. Sometimes I get violent on that place. Sometimes I will see things chasing me," Jantjie said in an interview with The Associated Press.

"I was in a very difficult position," he added. "And [I] remember those people, the president and everyone, they were armed, there was armed police around me. If I start panicking I'll start being a problem. I have to deal with this in a manner so that I mustn't embarrass my country."

Asked how often he had become violent, he told The Associated Press "a lot," while declining to provide details. He also did not say which president he was referring to, but did apologize for his performance and admitted he was once hospitalized in a mental health facility for more than a year.

The statements from Jantjie raised questions about the security at the event. For more than four hours, Jantjie stood three feet away from Obama and the other leaders, including U.N. Secretary-General Ban Ki-moon, while they were speaking at the lectern.

There was initial confusion Wednesday over who Jantjie was, as the country’s deaf community and the ruling African National Congress said they had no knowledge of his identity, despite him appearing on television gesticulating alongside South African President Jacob Zuma last year, Reuters reported.

When asked about the matter Wednesday, U.S. Secret Service Spokesman Brian Leary told FoxNews.com that the department was aware of it, but declined to elaborate.

Jantjie's admissions about his mental state were made Thursday.

White House Principal Deputy Press Secretary Josh Earnest said during a press briefing on Wednesday that the Secret Service is "ultimately responsible for the president's security." He said at the time he wasn't aware of any security concerns with the situation.

"I think my only reaction to that is that it's a shame that you had a service that was dedicated to honoring the life and celebrating the legacy of one of the great leaders of the 20th century, [and it] has gotten distracted by this and a few other issues that are far less important than the legacy of Nelson Mandela," he said.

A South African deputy Cabinet minister said "a mistake happened" when Jantjie was hired for the event.

Deputy Minister of Women, Children and People with Disabilities Hendrietta Bogopane-Zulu said Thursday that government officials have tried to track down the company that provided Jantjie, SA Interpreters, but that its co-owners "have vanished into thin air."

Bogopane-Zulu also apologized to deaf people who were offended around the world by what they say was Jantjie's incomprehensible signing.

She said an investigation is under way to determine how Jantjie received a security clearance.

Jantjie said he was due on the day of the ceremony to get a regular six-month mental health checkup to determine whether the medication he takes was working, whether it needed to be changed or whether he needed to be kept at a mental health facility for treatment.

He said he did not tell the company that contracted him for the event that he was due for the checkup, but said the owner of SA Interpreters in Johannesburg was aware of his condition.

AP journalists who visited the address of the company that Jantjie provided found a different company there, whose managers said they knew nothing about SA Interpreters. A woman answered the phone at a number that Jantjie provided and said it was not for the company, and another phone number went to a voicemail that did not identify the person or company with the number.

"He didn't follow any of the grammatical rules and structure of the language. He just invented his signs as he went along," Delphin Hlungwane, an official South African sign language interpreter at DeafSA, told Reuters on Wednesday.

For his part, Jantjie said that while voices in his head impaired his ability to interpret what was being said on stage, he was unable to leave and continued to sign things that didn't make sense.

“Life is unfair. This illness is unfair. Anyone who doesn’t understand this illness will think that I’m just making this up,” he told The Star. "There was nothing I could do. I was alone in a very dangerous situation. I tried to control myself and not show the world what was going on. I am very sorry, it’s the situation I found myself in."

Ingrid Parkin, principal of the St. Vincent School for the Deaf in Johannesburg, said she had received complaints from the deaf community from Canada to China about Jantjie on stage and how his movements looked "like he's signing gibberish." He also used no facial expression to convey the emotions of the leaders, a key element of sign language interpretation.

"This man himself knows he cannot sign and he had the guts to stand on an international stage and do that," Parkin said.

The scandal over the interpreter is another indication of the shoddy organization behind the historic memorial service.

Other difficulties included public transportation breakdowns which hindered mourners from getting to the event and a faulty audio system that prevented many of the tens of thousands in the stadium from hearing the leaders' speeches. In an apparent security failure, police did not search the first wave of crowds arriving at the stadium.

Bogus sign language interpreters are a problem in South Africa, because people who know a few signs try to pass themselves off as interpreters, Parkin said. And those hiring them usually don't sign, so they have no idea that the people they are hiring cannot do the job, she said.

FoxNews.com's Greg Norman and The Associated Press contributed to this report.