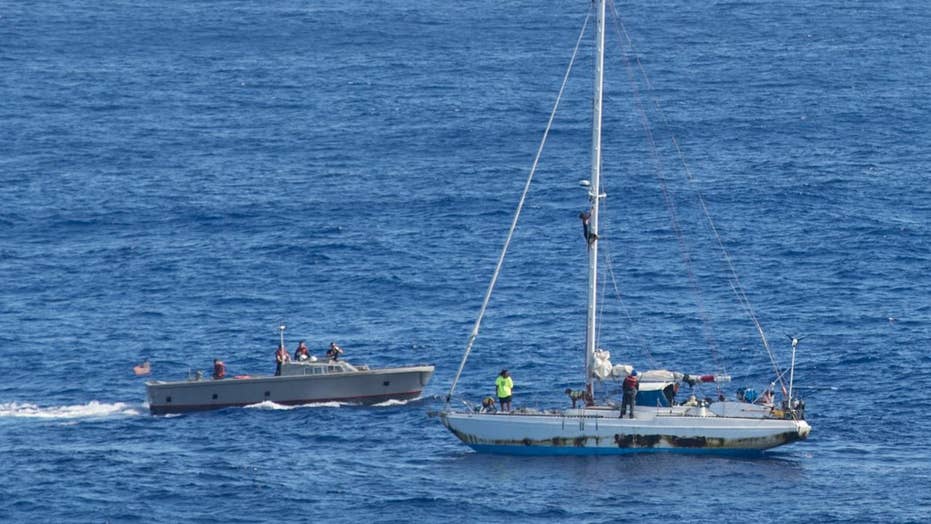 The US Navy rescued two mariners and their dogs after they were stranded at sea for months. Check out the amazing video of their rescue.

WHITE BEACH NAVAL FACILITY, Japan – A U.S. Navy ship carrying two sailors it rescued from their storm-battered sailboat in the Pacific docked Monday at an American naval base in Japan.

Jennifer Appel and Tasha Fuiava were standing with the USS Ashland's commanding officer and others high on the bridgeway when the ship arrived at White Beach Naval Facility in Okinawa, five days after it picked up the women and their two dogs from their boat, 900 miles southeast of Japan.

Appel and Fuiava had left Honolulu on May 3 aboard Appel's 50-foot vessel the Sea Nymph for what was supposed to be an 18-day trip to Tahiti.

Storms flooded the engine and damaged the mast and sails so badly, they couldn't generate enough wind power to stay on course. They drifted aimlessly and sent unanswered distress calls for 98 consecutive days.

They were thousands of miles in the wrong direction when a Taiwanese fishing vessel found them. Towing the sailboat damaged it further, but Appel swam to the Taiwanese vessel to make a mayday call.

They'd run out of food for the dogs, and the woman began sharing their own, leaving their food supply 90 percent depleted by the time they were rescued.

The USS Ashland on Wednesday picked up the women, plus the dogs Zeus and Valentine, all four looking remarkably fit for having been lost at sea for nearly six months.

Appel told reporters on Friday that they were beginning to believe they were completely out of luck when they saw the U.S. Navy ship chugging toward them.

"When I saw the gray ship on the horizon, I was just shaking," she said then. "I was ready to cry, I was so happy. I knew we were going to live."

US Navy rescue sailors, dogs stranded at sea for months

Hawaiian mariners Jennifer Appel and Tasha Fuiaba and their two dogs were rescued Wednesday after their sailboat strayed well off course during a trip to Tahiti.

Although Appel has been sailing the Hawaiian islands for 10 years and spent two years preparing for this voyage, she acknowledged she and Fuiava, a novice sailor, may not have prepared as well as they could have.

Appel credited their survival in part to the veteran sailors in Hawaii who had warned them to prepare well for their journey.

"They said pack every square inch of your boat with food, and if you think you need a month, pack six months, because you have no idea what could possibly happen out there," Appel said. "And the sailors in Honolulu really gave us good advice. We're here."