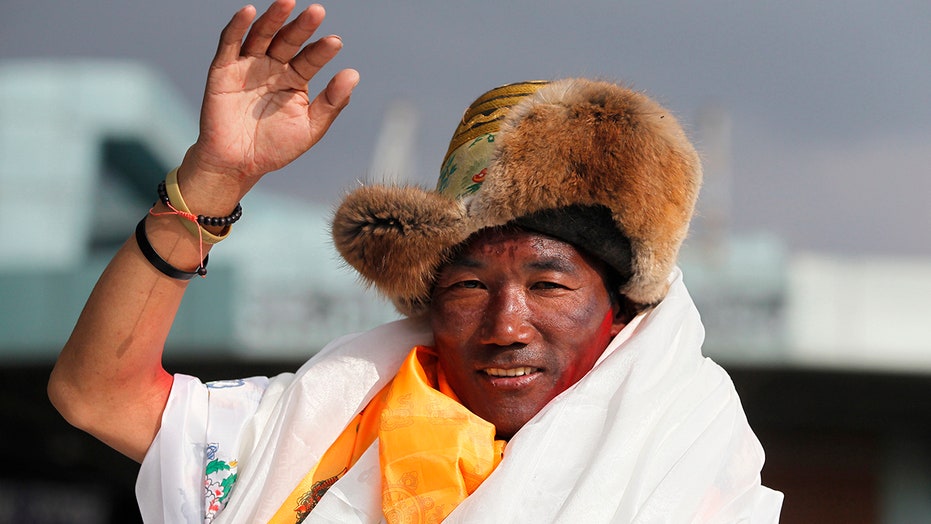 A Sherpa who has scaled to the summit of Mount Everest nearly two dozen times broke his own record for most successful ascents of the world’s highest peak.

Kami Rita first scaled Everest in 1994 and has been making trips nearly every year since. On Wednesday morning, he climbed the 29,035-foot peak once again for the record 23rd time.

“It is my profession, but at the time I am setting a new world record for Nepal too,” the 49-year-old the Associated Press last month before heading to the mountain.

A Nepalese government official at the mountain’s base camp said that Rita and other climbers who made it to the summit on Wednesday were reported to be safe.

Officials say Rita reached the summit with other climbers Wednesday morning and all of them were reported to be safe. (AP Photo/Niranjan Shrestha)

Rita said his father was among the first Sherpa guides employed to help climbers reach the summit and he followed in his footsteps. Aside from this nearly two dozen summits on Everest, Rita has also reached other peaks including K-2, Cho-Oyu, Manaslu, and Lhotse.

"I am like a soldier who leaves behind their wives, children, and family to battle for the pride of the country,” he told the AP.

He said the only other two Sherpas near his record reached the summit 21 times, but have since retired.

Sherpa tribespeople were mostly yak herders and traders living deep within the Himalayas until Nepal opened its borders in the 1950s. Their stamina and familiarity with the mountains quickly made them sought-after guides and porters.

Rita is working to make sure other Sherpa guides get the recognition they are due.

Rita's two closest peers have climbed the 8,850-meter (29,035-foot) peak 21 times each, but both of them have retired from mountain climbing. (AP Photo/Niranjan Shrestha, File)

He said that before climbers reach the summit to take their photographs announcing their success, there are months of hard work done by Sherpas. The Sherpas are the ones who take care of setting up the camps, carrying the loads on their backs, cooking food and carrying oxygen tanks.

MOUNT EVEREST IS COVERED IN GARBAGE AND DEAD BODIES: REPORT

Perhaps most important, it is Sherpas who each year fix ropes and ladders over crevasses and icefalls that make things safer for the hundreds of climbers who will follow them.

"However, when these climbers reach the summit, only their names are highlighted and nothing mentioned about the hard work done by the Sherpas," Rita said last month.

There are 41 different teams with a total of 378 climbers who have been permitted to scale Everest during this year's spring climbing season. There is an equal number of Nepalese guides helping them to get to the summit.

Each May, there are usually only a few windows of good weather near the summit during which climbers can attempt to scale the peak.