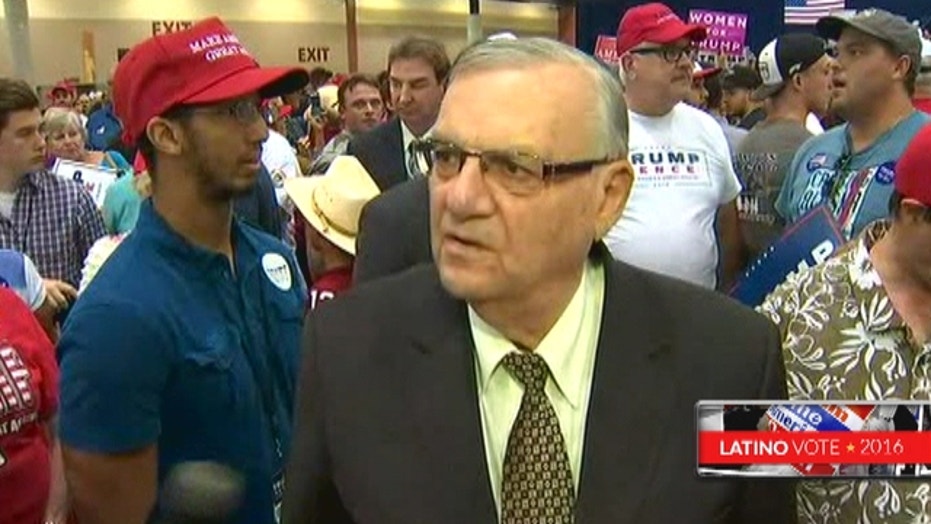 PHOENIX (AP) – The federal government had just stripped Sheriff Joe Arpaio of his power to arrest immigrants in the country illegally when the defiant metro Phoenix lawman put his bravado to the test at a 2009 rally.

He stepped to a podium to announce the launch of an immigration crackdown. Protesters howled into megaphones in hopes of drowning out his speech, and federal lawyers investigating him on discrimination allegations milled in the crowd.

"We don't have to be controlled by Washington," said the self-proclaimed "America's Toughest Sheriff," only months removed from an unopposed re-election victory.

Arpaio's political invincibility ended Tuesday when a little-known retired Phoenix police sergeant unseated him after 24 years in office. It marked a stunning fall for a lawman whose reputation as an immigration enforcer made him wildly popular among conservatives nationwide.

Arpaio attached himself to Donald Trump, but the alliance could not overshadow what became a repudiation of his mounting legal woes and costs to taxpayers stemming from his patrols targeting immigrants.

The election also provided more evidence that Arizona voters care little about immigration. Exit polls showed that only about 1 in 10 voters named immigration as the most important issue, and three-quarters said they supported a path to legal status for immigrants.

The 84-year-old sheriff didn't make any public appearances on Election Night, issuing a statement saying he was disappointed by the results but congratulated the winner, Paul Penzone.

"My thanks and appreciation to the people of Maricopa County for the faith and trust they put in me over the years," Arpaio said.

His downfall proved partly tied to a criminal contempt-of-court charge for his acknowledged defiance of a judge's order in a racial profiling case stemming from his immigration patrols. He also cost taxpayers $130 million to defend him in lawsuits over his tenure.

Federal prosecutors brought the misdemeanor charge two weeks before Election Day. He is set for a Dec. 6 trial and could face up to six months in jail if convicted.

The sheriff represented the last vestige of a movement started a decade ago by Arizona politicians who advocated for local police to crack down on illegal immigration.

Members of the movement saw Arpaio as the stalwart who could be counted on to vigorously enforce state laws aimed at curbing immigrant smuggling and employers who hire people in the country illegally.

The movement gradually lost steam after immigrant smuggling in Arizona declined and the courts threw out the state's most stringent immigration laws.

Arpaio didn't start out as an immigration enforcer.

Shortly after his first election, the retired federal drug agent won high marks from voters for jailing inmates in tents in Phoenix's summer heat, dressing them in pink underwear and denying them coffee and cigarettes. He served them bologna sandwiches on dry bread.

The sheriff bragged over the years that his tough jail conditions were the source of his popularity.

"I can get elected on pink underwear," Arpaio told The Associated Press in 2010.

His tactics appealed to voters who believed, as he did, that jail should not be comfortable. But his jail management drew a steady stream of lawsuits.

Arpaio initially was slow to get into the border battle he came to be known for. He said an Army reservist who detained immigrants at gunpoint in 2005 broke the law by taking it into his own hands.

But months later, Arpaio wholeheartedly jumped into immigration enforcement after Arizona passed a law banning immigrant smuggling. He said his officers would target smugglers, not people who come to the country illegally merely to work.

In the end, his officers went after mostly immigrants and few smugglers and employers. They arrested 700 immigrants on charges of using fraudulent IDs to get jobs. He also launched patrols known as "sweeps," in which deputies flooded part of a city — sometimes heavily Latino areas — to seek out traffic violators and other offenders.

Arpaio harnessed his reputation for fundraising before the courts and federal government forced him out of immigration enforcement two years ago.

Mostly out-of-state donors gave $12.3 million to his last campaign, with many saying they liked that Arpaio arrested immigrants. Candidates nationwide, including GOP presidential hopefuls, sought his endorsement to bolster their immigration credentials.

His image as a crime fighter was tarnished when his office failed to adequately investigate more than 400 sex-crimes cases, including dozens of allegations of child molestation, over a three-year period ending in 2007.

Years later, Arpaio apologized for botching the cases but complained bitterly to news reporters about the lasting negative impressions. Though he managed to win re-election after the scandal, Arpaio was slowly dragged down by the racial profiling case.

Taxpayers who have already paid $48 million in legal costs in the case will be feeling the financial pain for years. The costs are expected to reach $72 million, due in large part to court-ordered changes in the agency.