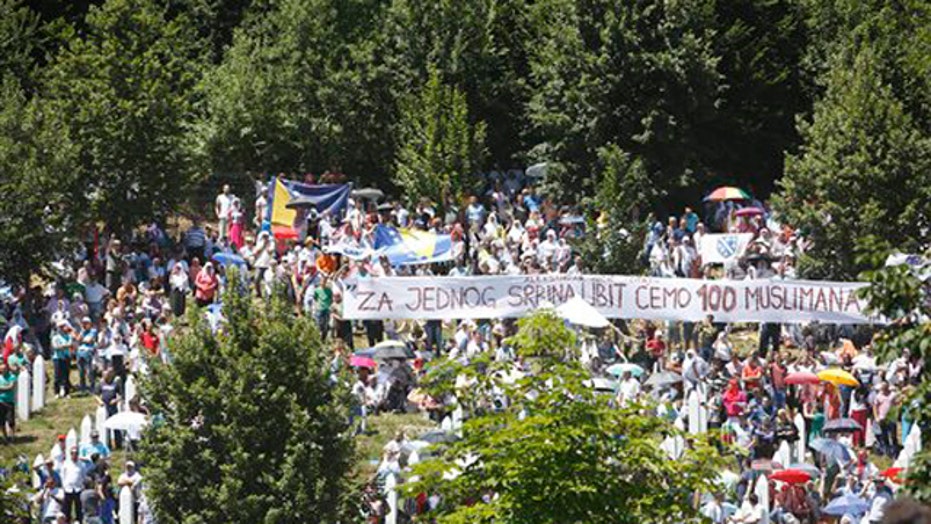 A crowd gathered Saturday to commemorate the Srebrenica slaughter 20 years ago pelted the Serbian prime minister with stones and water bottles in an attack the Serbian interior minister called an “assassination attempt.".

Aleksandar Vucic, a former ultranationalist during the Balkan wars but who is now a moderate with a pro-Western stance, escaped serious injury. He said he was hit in the face with a rock as the crowds chanted "Kill, Kill" and "Allahu akbar," the Arabic phrase for "God is great."

Vucic's associate, Suzana Vasiljevic, told AP that he was hit in the face with a stone and his glasses were broken. Vasiljevic said she was behind Vucic when "masses broke the fences and turned against us."

Tens of thousands came to mark the 20th anniversary of Europe's worst massacre since the Holocaust -- the slaughter of 8,000 Muslims from the eastern Bosnian town of Srebrenica -- with foreign dignitaries urging the international community not to allow such atrocities to happen again and to call the crime "genocide."

Vucic is among the most hated individuals for Bosnian Muslims, with some viewing him in worse terms than late strongman Slobodan Milosevic. During the 1992-95 Bosnian war, Vucic was an ultranationalist politician in opposition to Milosevic, criticizing the Serb leader of leniency toward Bosnian Muslims.

Many Bosnian Muslims also still remember Vucic's incendiary statement during the Balkan wars that for every dead Serb, 100 Muslims should be killed. Some in the crowd held a banner with the quote to remind him of his past.

Vucic's security detail rushed him away, trying to protect him with bags, umbrellas and their raised arms from the projectiles raining down. His guards shoved through the angry crowd before pushing the prime minister inside an armored vehicle.

"We were attacked from all sides. It was well organized and prepared," a visibly shaken Vucic said upon his quick return to Serbia. He blamed hooligan soccer groups from Serbia and Bosnia for initiating the attack.

"I heard Muslim people telling the attackers `why are you attacking him? It is not his fault. He had not done anything here."'

He added: "Except for my glasses, I'm missing nothing else."

Some Srebrenica widows and mothers welcomed his presence however.

"Only on truth we can build a future. You cannot deny the truth," Kada Hotic, who lost her son and husband in the massacre, told Vucic before the ceremony.

The Muslim Bosniak mayor of Srebrenica, Camil Durakovic, apologized to Vucic, saying he was "deeply disappointed" about the attack.

Tens of thousands of people came to the commemorations marking two decades since Europe's worst massacre since the Holocaust.

Foreign dignitaries urged the international community not to allow such atrocities to happen again and to call the crime "genocide."

Serbia and Bosnian Serbs deny the killings were genocide, and claim that the death toll has been exaggerated.

"I grieve that it took us so long to unify ... to stop this violence," said Clinton, who was in office at the time of the massacre and whose administration led the NATO airstrikes against Serb positions. This ended the Bosnian war and the U.S. brokered a peace agreement.

Clinton said before the attack on Vucic: "I want to thank the prime minister of Serbia for having the courage to come here today and I think it is important that we acknowledge that."

U.N. Deputy Secretary-General Jan Eliasson, who witnessed the attack, condemned the "deplorable acts of violence" against Vucic. He said it was "far removed from the spirit I felt at this dignified and solemn commemoration."