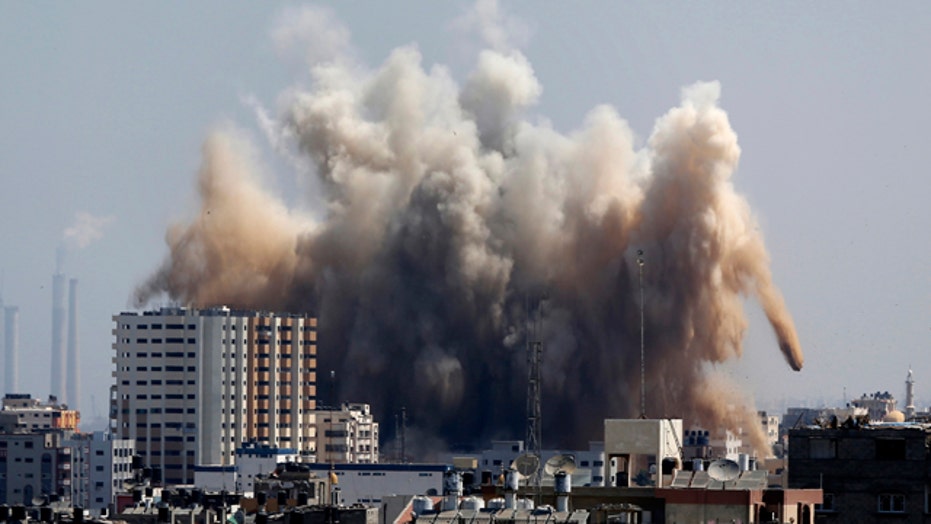 Israeli forces struck more than 20 targets Saturday in the Gaza Strip in response to rocket fire from the area after the expiration of a cease-fire between Israel and the terror group Hamas, reportedly killing a senior member of the militant group.

The Israeli military said militants in Gaza fired five rockets Saturday toward Israel, for a total of 70 since the truce expired. In response, Israel has targeted more than 30 sites in Gaza since Friday, it said.

The militants resumed their rocket attacks Friday shortly before the 72-hour truce expired, drawing a wave of retaliatory airstrikes that killed at least five Palestinians. The fighting shattered a brief calm in the month-long war and dealt a blow to Egyptian-led efforts to secure a long-term cease-fire

The renewed violence threw the Cairo talks on a broader deal into doubt. Hamas officials said they are ready to continue talks, but Israel's government spokesman said Israel will not negotiate under fire.

Hamas wants Israel to open Gaza's borders, following a seven-year closure also enforced by Egypt, but Israel says it will only do so if the Islamic militants disarm or are prevented from re-arming. Hamas has insisted it will never give up its arms.

The wide gaps became clear at an all-night meeting between Egyptian and Palestinian negotiators that preceded the renewed fire. Hamas negotiators told The Associated Press that Israel rejected all of their demands.

Hamas had entered the Cairo talks from a position of military weakness, following a month of fighting in which Israel pounded Gaza with close to 5,000 strikes. Israel has said Hamas lost hundreds of fighters, two-thirds of its rocket arsenal and all of its military attack tunnels under the border with Israel.

The heavy toll of the war appears to have made Hamas even more resistant to returning to the status quo. The group is unlikely to accept a cease-fire without assurances that Gaza's borders will be opened -- particularly after the fighting left close to 1,900 Gaza residents dead, more than 9,000 wounded and tens of thousands displaced, with entire neighborhoods reduced to rubble.

With nothing to show for in the negotiations, Gaza militants began firing rockets at Israel within minutes after the temporary truce expired early Friday morning.

The rockets appeared to have been an attempt by Hamas to exert pressure on Israel without triggering a major escalation. Smaller Gaza groups claimed responsibility, while there was no word from Hamas rocket squads.

However, Israel said it will not negotiate under such terms.

"When Hamas broke the cease-fire, when Hamas launched rockets and mortar shells at Israel, they broke the premise of the talks," said Israeli government spokesman Mark Regev, adding that "there will not be negotiations under fire."

The Israeli delegation to the Cairo talks left Egypt on Friday morning, and it was not clear if it would return.

Previous rounds of Israel-Hamas fighting ended inconclusively, setting the stage for the next confrontation because underlying problems were not resolved, particularly the stifling border closure of Gaza.

Israel and Egypt imposed the blockade after the Hamas takeover of Gaza in 2007, and have since enforced it to varying degrees.

The closure led to widespread hardship in the Mediterranean seaside territory, home to 1.8 million people. Movement in and out of Gaza is limited, the economy has ground to a standstill and unemployment is over 50 percent.

Israel argues that it needs to keep Gaza's borders under a blockade as long as Hamas tries to smuggle weapons into Gaza or manufactures them there.

The militant group has said it is willing to hand over some power in Gaza to enable its long-time rival, Western-backed Palestinian President Mahmoud Abbas, to lead reconstruction efforts, but that it would not give up its arsenal and control over thousands of armed men.