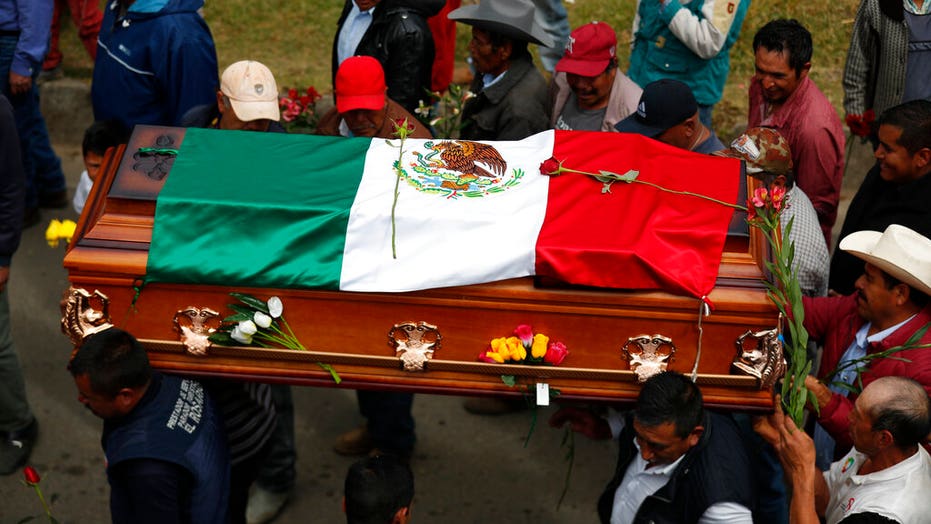 Mexican authorities are investigating the deaths of two men -- a part-time tour guide and an anti-logging activist -- both of whom had connections to one of the country's largest butterfly sanctuaries and whose bodies were discovered within a week of each other.

Police found the body of 44-year-old Raúl Hernández Romero Saturday and presumed the tour guide was beaten to death with a sharp object, according to reports by the Washington Post.

MEXICAN INMATES WHO ESCAPED PRISON LINKED TO 'EL CHAPO,' MAY HAVE HAD HELP FROM GUARDS

Just days before, the body of an esteemed and popular politician, Homero Gómez González, who championed preserving the monarch butterfly sanctuary and advocated for clamping down on illegal logging in Mexico, turned up at the bottom of a holding pond. He suffered a traumatic head wound and drowned, according to local authorities, the Associated Press reported.

Mourners carry the flag-draped coffin of community activist Homero Gomez Gonzalez as the funeral procession makes its way from the church to a hillside cemetery, in Ocampo, Michoacan state, Mexico, Friday, Jan. 31, 2020. Hundreds of farmers and agricultural workers attended the funeral Friday, and the homage to the anti-logging activist was like a tribute to the monarch butterfly he so staunchly defended. (AP Photo/Rebecca Blackwell)

The deaths have fueled fears in Mexico that activists are being targeted. However, authorities have not been able to confirm a link between the deaths.

“Something strange is happening, because they're finishing off all the activists, the people who are doing something for society,” Amado Gómez, González's brother, told the AP.

The push to stop illegal logging was born from the deterioration of the monarch butterflies habitat, a site that millions of monarchs migrate to in Michoacan for the winter, drawing in tourists to take in the scene.

Prosecutors said they have ruled out robbery as a potential motive in González' death since almost $500 in cash was found on his body.

On Thursday night, mourners in threadbare clothes lit candles and adorned the casket of González with simple floral arrangements.

A photo of Homero Gomez Gonzalez rests atop his coffin during his wake in Ocampo, Michoacan state, Mexico, Thursday, Jan. 30, 2020. Relatives of the anti-logging activist who fought to protect the winter habitat of monarch butterflies don't know whether he was murdered or died accidentally, but they say they do know one thing for sure: something bad is happening to rights and environmental activists in Mexico, and people are afraid.(AP Photo/Rebecca Blackwell)

“I would like to ask the authorities to do their job and do more to protect activists like my brother, because lately in Mexico a lot of activists have died,” Amado Gómez said. “With his death, not only my family lost a loved one; but the whole world, and the monarch butterfly and the forests lost, too.”