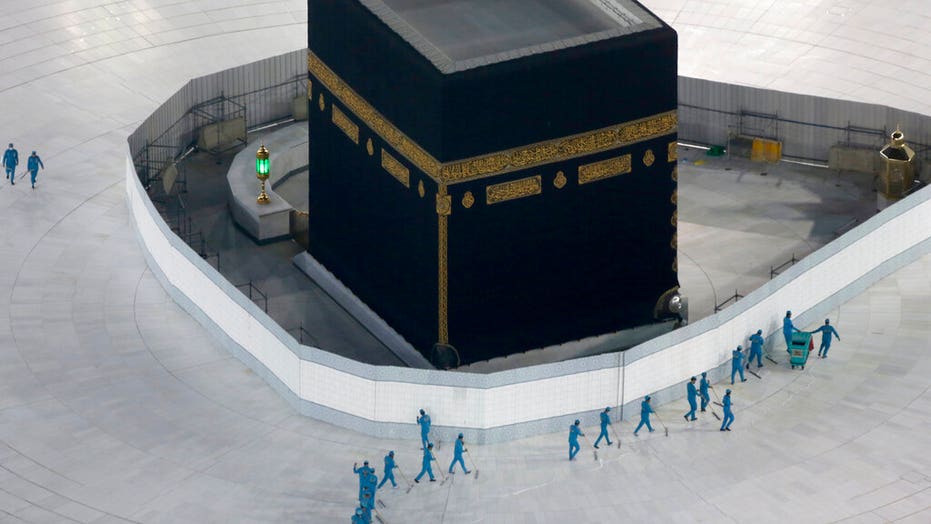 Only about 1,000 Muslims already inside Saudi Arabia's kingdom will be allowed to attend a heavily pared-down version of hajj this year due to the coronavirus, officials announced Tuesday.

Those who want to participate in the much-anticipated pilgrimage to Mecca must be under the age of 65 and agree to quarantine before and after the event.

Officials had weighed canceling the annual pilgrimage for weeks for fear of a resurgence of COVID-19 but settled on allowing a “small and very limited” number of people to attend in an unprecedented decision in the 90-year history of the kingdom.

In this March 7, 2020 file photo, workers disinfect the ground around the Kaaba, the cubic building at the Grand Mosque, in the Muslim holy city of Mecca, Saudi Arabia after authorities emptied Islam's holiest site for sterilization over fears of the new coronavirus. (AP Photo/Amr Nabil, File)

“The number, God willing, may be in the thousands. We are in the process of reviewing so it could be 1,000 or less, or a little more,” Saudi Arabia's Hajj Minister Muhammad Benten said during a virtual press conference Tuesday. The event usually draws more than 2 million people from all over the globe.

Only worshippers of various nationalities inside the kingdom will be allowed to participate, a blow to Muslims worldwide who have saved for the opportunity to make the once-in-a-lifetime trip that is required by Islam for all devotees.

“This is a very sensitive operation and we are working with experts at the Health Ministry,” Benten said, stressing the importance of protecting the lives and health of pilgrims.

Typically, every country is granted a specific number of visas for people to attend hajj that is proportionate to its population of Muslims. In some countries -- such as Egypt, Pakistan and India -- competitive queues to attend the event require payment of hefty fees, a connection to a local official or simply years of patience.

“It is a wish of every Muslim to perform hajj, but because of COVID-19, it will not be possible this year," said Maulana Khalid Rashid, chairman of the Islamic Center of India.

In this Aug. 10, 2019 file photo, hundreds of thousands of Muslim pilgrims pray outside Namira Mosque in Arafat during the annual hajj pilgrimage, near the holy city of Mecca, Saudi Arabia. (AP Photo/Amr Nabil, File)

Rashid, who is one of India's most influential Muslim clerics, blamed China for the disappointing restrictions and insisted that a delegation from India be allowed to participate in the pilgrimage.

"Had China told the world about COVID beforehand, the world would have reacted differently,” he said. “This is an annual ritual and the tradition should not be broken."

Other countries, including Egypt, Indonesia and Afghanistan, praised Riyadh’s decision-making that showed awareness of the dangers caused by the virus.

The kingdom has one of the highest infection rates in the Middle East, with more than 161,000 confirmed cases of coronavirus, including 1,307 deaths.