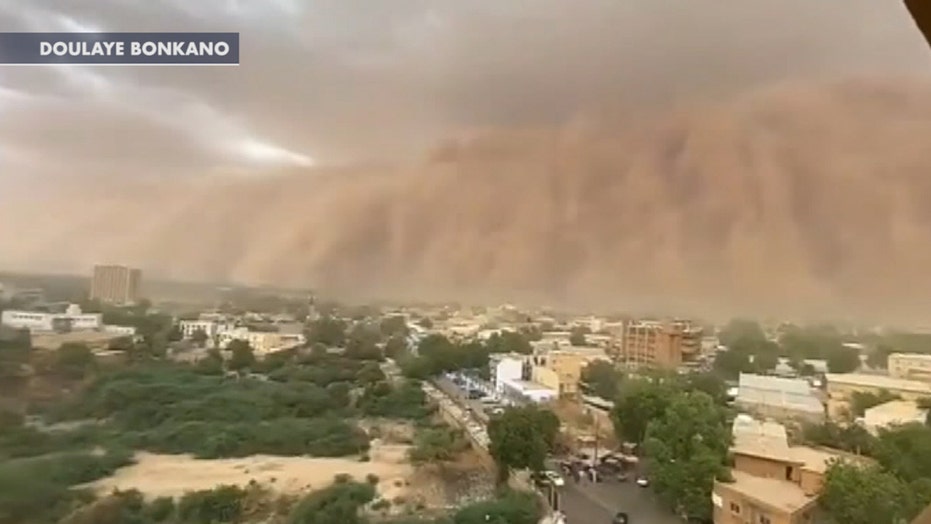 A massive wall of dust and sand that engulfed the capital of the West African nation of Niger  Monday turned the sky red and terrified residents.

Footage filmed by Doulaye Bonkano showed the towering wall of sand overtaking the city of Niamey.

One Twitter user described the sight as "utterly terrifying."

A massive sandstorm swept into Niamey, the capital city of Niger, on Monday. (Doulaye Bonkano via Storyful)

Images posted to social media show the approaching wall of dust descending on the city.

Residents said the storm turned the sky dark, right in the middle of the day.

Other images showed the dust turning the sky orange.

Niger is known for frequent sandstorms that sweep Saharan sand through the country and out toward the Atlantic Ocean. They typically hit from January to April, in what is known as the "Harmattan" season.

According to the World Meteorological Organization, the storms usually occur when strong winds lift large amounts of sand and dust from bare, dry soils into the atmosphere. They are usually caused by thunderstorms.

Besides creating visibility issues and travel delays, the WMO said airborne dust also presents "serious risks" for health. Besides impacts from particles on human organs, some infectious diseases also may be transmitted by dust, such as meningococcal meningitis.

"Outbreaks occur worldwide, yet the highest incidence is found in the 'meningitis belt,' a part of sub-Saharan Africa with an estimated population of 300 million," the WMO states.

A huge dust storm, complete with 60 mph winds hits Charleville in Queensland, Australia and deposits a film of orange dust over the town.