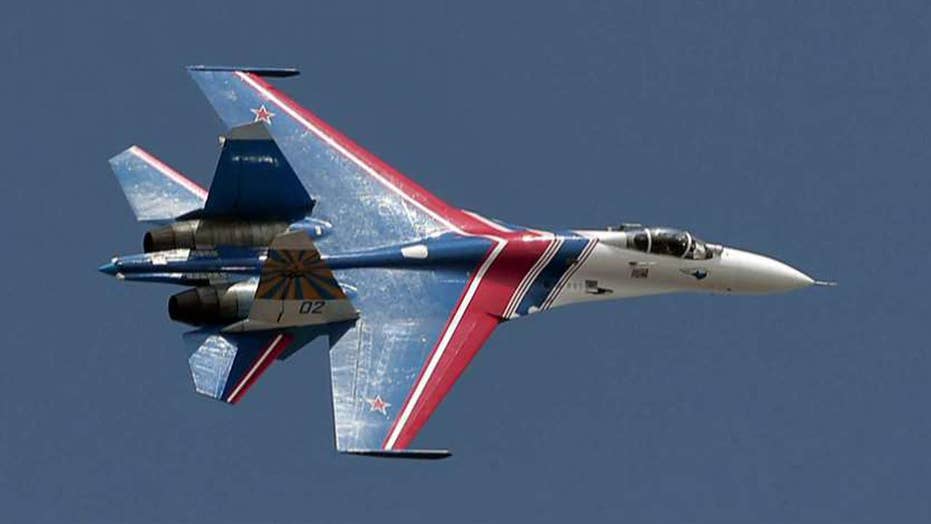 Armed Russian jet flew within 20 feet of US Navy aircraft

The Russian jet came as close as 20 feet to the American aircraft and remained that close for five minutes, a U.S. defense official told Fox News.

It is very rare for a Russian jet to intercept a U.S. aircraft while visibly armed, officials said.

The Russian jet came within 70 miles of the USS Carl Vinson Strike Group, “which isn’t very far when you are talking about jets,” a defense official told Fox News.

Earlier, officials described the encounter between the reconnaissance plane and the fighter jet as mostly being "safe."

"While this one was considered by the flight crew to be safe and professional, this sort of close encounter certainly has the possibility to become dangerous in a hurry," the defense official said.

A Su-27 Russian jet made the close approach to the P-8A Poseidon while the Navy plane was in international airspace.

The Su-27 was scrambled reportedly  after the Poseidon appeared to be approaching Russia's border. The Poseidon soon changed its course.

In a statement issued Friday, the Russian officials called the jet’s intercept a “greeting” maneuver.

“After approaching a plane at a safe distance the Russian pilot visually identified the flying object as a U.S. surveillance plane P-8A Poseidon,” the Russian military said in the statement.

Unlike Russian intercepts in the past, this Russian jet approached the U.S. Navy recon plane "slowly," according to the defense official.  The entire encounter lasted about an hour.

"It goes on almost every day of the week," the official said. A separate official said about 60 such incidents have occurred since 2007, RT reported.

The latest Russian incident in the Black Sea comes a month before the U.S. military kicks off a series of military exercises in the region.

In February, Russian fighter jets buzzed a U.S. Navy destroyer in the Black Sea on the same day the U.S. Army unloaded dozens of tanks and hundreds of soldiers in a nearby Romanian port along the Black Sea.

The same destroyer the Russians buzzed in February — USS Porter —  was one of the warships which launched cruise missiles into Syria last month.

In September, a Russian jet buzzed a Navy spy plane over the Black Sea, the aircrafts coming within 10 feet of each other during that encounter.

When asked about the timing of Tuesday's incident coming a day before Lavrov's visit to Washington to meet President Trump and Secretary of State Rex Tillerson, the defense official asked, "What were we doing flying that day?"

The latest Russian provocation comes a week after a pair of Russian Bear bombers and fighter jets flew near Alaska on several consecutive nights, prompting the U.S. Air Force to dispatch F-22 stealth fighter jets to intercept the Russian formation.

NBC News was the first to report Tuesday's intercept.

Days ago, Russia sent roughly 21 artillery pieces to Syria to help Assad forces fighting a rebellion in the country that has stretched over six years.