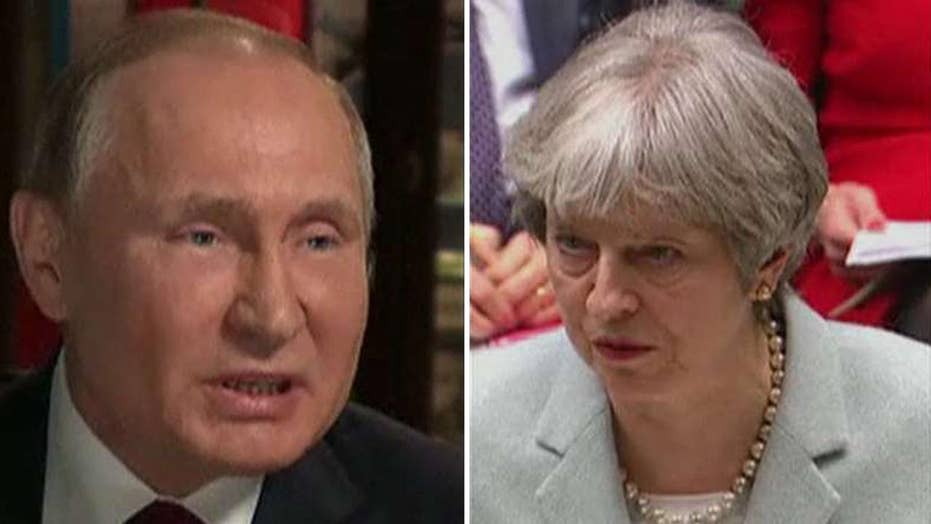 Russia retaliated against the United Kingdom Saturday morning, announcing it would also be expelling 23 British diplomats amid the growing tensions between the two nations over the nerve agent attack on a former Kremlin spy.

The Russian Foreign Ministry said it was ordering the closure of the British Council – a government organization for cultural and scientific cooperation – as well as ending an agreement to reopen the British consulate in St. Petersburg.

British diplomats have to leave within a week.

The statement said the government could take further measures if Britain takes any more "unfriendly" moves toward Russia.

A spokesman for the British foreign ministry said in a statement Saturday they expected a reaction from the Kremlin and are assisting their staff members who have been expelled.

"Russia’s response doesn’t change the facts of the matter - the attempted assassination of two people on British soil, for which there is no alternative conclusion other than that the Russian State was culpable," the statement said.

Russia’s retaliation comes days after British Prime Minister announced the expulsion of 23 Russian diplomats following the suspicious poisoning of ex-spy Sergei Skripal and his daughter Yulia on March 4. The two remain in critical condition and in the hospital.

May said on Monday that it was “highly likely” the Kremlin is responsible for the attack, while Britain’s Foreign Minister Boris Johnson directly put the blame on Russian President Vladimir Putin.

“Our quarrel is with Putin’s Kremlin, and with this decision, and we think it overwhelmingly likely that it was his decision to direct the use of a nerve agent on the streets of the U.K., on the streets of Europe, for the first time since the Second World War,” he told reporters on Friday. “That is why we are at odds with Russia.”

While Russia has vigorously denied any involvement in the attack, Western leaders banded together earlier this week and called out the Kremlin for meddling abroad.

In a rare joint statement, the leaders of the U.S., France and Germany joined May in accusing Russia of being behind the attack.

Meanwhile, adding further strain, British police have opened a murder investigation into the suspicious death of London-based Russian businessman, Nikolai Glushkov. Authorities said Friday that he died from compression to the neck.

British police said there is no apparent link between the attack on Glushkov and the poisoning of the Skripals, but both have raised alarm in the West at a time when Russia is increasingly assertive on the global stage and facing investigations over alleged interference in the Donald Trump's election as U.S. president.

The source of the nerve agent — which Britain says is Soviet-made Novichok — is unclear, as is the way it was administered. Russia has demanded that Britain share samples collected by investigators.

Top EU diplomats were expected to discuss next steps at a meeting Monday, with some calling for a boycott of the upcoming World Cup in Russia. British Prime Minister Theresa May is seeking a global coalition of countries to punish Moscow.