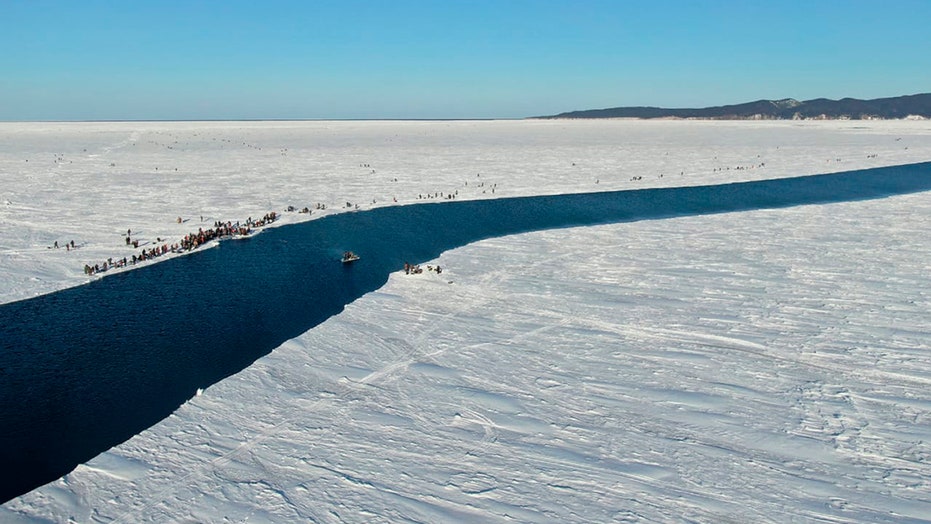 This was not exactly a catch of the day.

More than 500 fishermen in Russia needed to be rescued on Tuesday after they got stranded on a giant ice floe that broke off and drifted away from land.

The Russia Emergency Situations Ministry said the incident happened just off the shore from the island of Sakhalin, in eastern Siberia.

"Contrary to common sense and rescuers' warnings, who were informed via SMS messages and the media that going out on the ice is extremely dangerous, several hundred people decided to try their luck and went out on unreliable ice," EMERCOM of Russia said.

A group of fishermen in Russia use a smaller piece of ice as a raft trying to row to the coast, as the ice floe with stranded fishermen on them slowly drifted further away from the land in eastern Siberia, Russia. (Russia Emergency Situations Ministry press service via AP)

Officials said that around 8:40 a.m. Moscow time, a nearly 23-foot crack formed in the ice off the coast in the Mordvinov's Bay, trapping 536 "amateur" fishermen.

Over the next seven hours, EMERCOM said that 20 people were involved in the rescue operation that included three boats and one hovercraft.

Around 60 more people were able to get back on the shore on their own Tuesday evening, emergency officials said.

Footage of the incident showed groups of people using smaller pieces of ice as rafts and trying to row to the coast on them, as the ice floe with stranded fishermen slowly drifted farther away from the land.

Russia's emergency services rescued 536 ice fishermen after they got stranded on a giant ice floe that broke off the island of Sakhalin in eastern Siberia. (Russia Emergency Situations Ministry press service via AP)

According to some of the fishermen, by the time they had been rescued, the rift between the ice floe and the coast was already some 650 feet wide. Even with the hundreds of people that were stuck on the ice, EMERCOM said no injuries were reported and none of those rescued needed medical assistance.

It was the third time in a week that emergency services in the Sakhalin region had to rescue ice fishermen stuck on drifting glacial masses, according to The Associated Press.

Local authorities blamed the incidents on fishermen ignoring safety warnings and going ice fishing despite the danger of being stranded on ice floes.