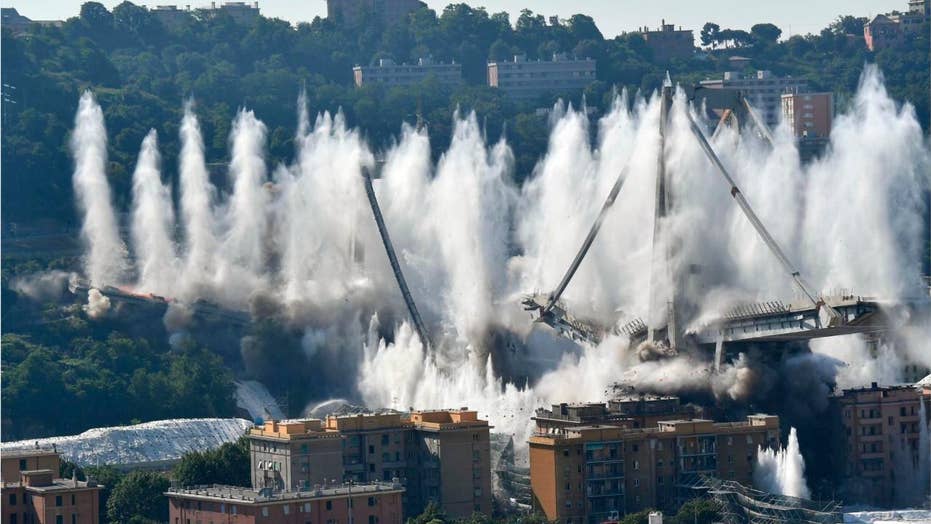 Ruins of bridge in Italy demolished nearly a year after collapse

The ruins of a bridge in Italy was demolished nearly a year after a deadly collapse.

The remnants of a bridge in Italy that collapsed last summer, killing 43 people, were finally torn down as a planned explosion cleared the structure in Genoa on Friday morning.

The Morandi Bridge, which linked the port city to a high-speed highway leading to the French Riviera and another highway leading to Milan, was brought down in a matter of a few seconds after a planned explosion went off at 9:37 a.m. local time.

Some 3,500 people who live nearby had been evacuated as a precaution on Thursday and before dawn on Friday. Before leaving, many had covered windows and doors with plastic sheeting in a bid to prevent dust from infiltrating their homes.

A cloud of dust rises as the remaining spans of the Morandi bridge are demolished in a planned explosion, in Genoa, Italy, Friday, June 28, 2019. (AP Photo/Antonio Calanni)

The blast was an effort to remove the remaining pillars and road that did not come down during the deadly August 14 collapse that killed 43 people last summer.

While officials have not yet named an official cause, the bridge, first built in 1967, had undergone tremendous stress from the 25 million vehicles that traveled it on average every year and sea air that heavily corroded the steel rods suspending the road, the BBC reported.

Traffic and severe thunderstorms were likely catalysts as the bridge collapsed on the eve of Italy's chief summer holiday, Ferragosto.

World-famed architect Renzo Piano, a Genoa native, has designed a replacement bridge that will feature 43 lamps dotting the span in tribute to those who lost their lives.

Genoa Mayor Mario Bucci said engineers will check to see if the nearby apartment buildings are still sound after Friday's explosion. If they give the all-clear, residents will be allowed to return to their homes.