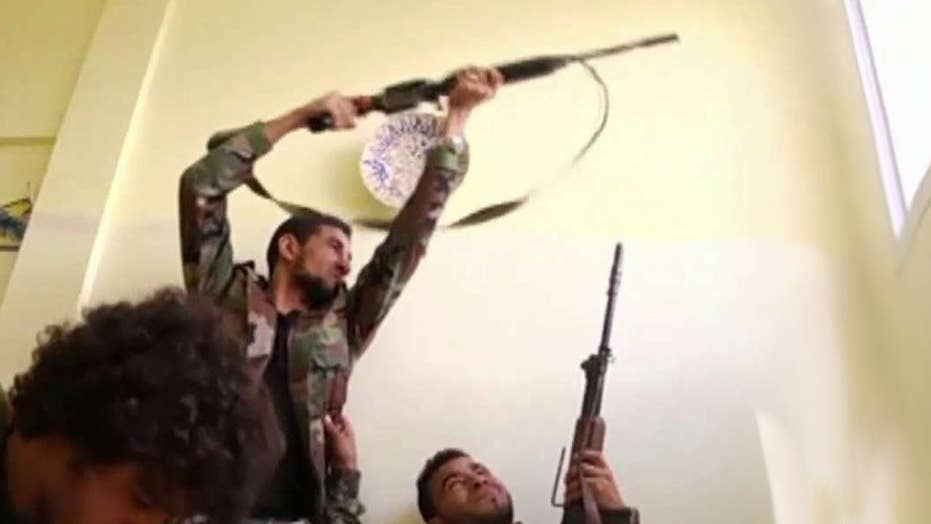 Obama to send weapons to the Libyans to fight ISIS

The administration is trying to keep the terror group from expanding territory; Kevin Corke explains on 'Special Report'

CAIRO – A leading international rights group on Wednesday released a report documenting atrocities committed by Libya's Islamic State affiliate in the country's coastal city of Sirte, a stronghold of the militants.

In the report, Human Rights Watch recounts "scenes of horror" described by witnesses — atrocities that date back to Feb. 2015 and include beheadings of dozens of residents accused by IS militants of being spies.

The Islamic State has gained a foothold in Libya amid the chaos that engulfed the country over the past few years, torn between rival governments and a myriad of militias backing either side.

The report by the New York-based watchdog also recounts instances of "crucifixions" and floggings of men for acts such as smoking or listening to music. The report is based on HRW interviews of 45 residents of Sirte conducted in March last year. The residents were among the two thirds of the city's 80,000-strong population that fled after IS overran Sirte.

"While the world's attention is focused on atrocities in Syria and Iraq, ISIS is also getting away with murder in Libya," said Letta Tayler, a senior terrorism and counterterrorism researcher at HRW, using an alternative acronym for the Islamic State group.

U.S. military experts estimated in April that the Islamic State group has up to 6,000 fighters in Libya. However, Libyan military intelligence officials have told HRW that the affiliate's numbers do not exceed 2,000 — 70 percent of whom are foreigners. Estimates by other Libyan security analysts put the number of IS fighters in the country at 3,000.

In running Sirte, HRW said IS gave homes and all the goods seized from residents who fled to its fighters. Those who were accused of being spies or sorcerers were brutally killed, the right group said.

The report comes just days after the United States and other Western countries threw their support behind Libya's newly formed and U.N.-brokered government, saying they would supply the government with weapons to counter the Islamic State group.

This has sparked concerns of more arms being poured into this North African country already awash in weapons.