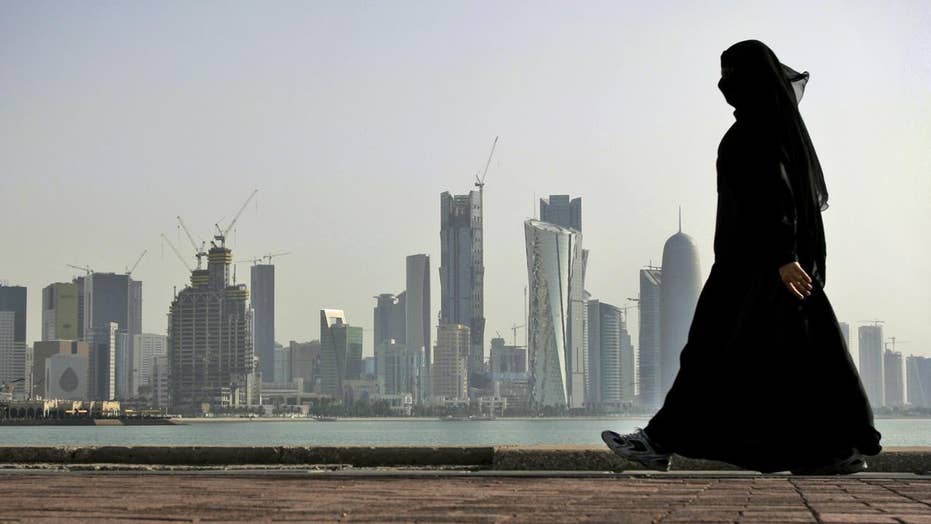 How Arab nations isolating Qatar will impact the US

The rift complicates the fight against ISIS as the U.S. pushes for greater coordination to combat extremism; Rich Edson explains on 'Special Report'

When Hamas released a new political document last month, the terrorist group announced it at a press conference at the Sheraton Grand Doha in Qatar, less than an hour’s drive across town from U.S. Central Command forward headquarters at Al Udeid Airbase.

Nearby is the Taliban “Embassy” that was briefly set up to facilitate negotiations with the Obama administration, though Qatar still pays for the delegation to live there. Minutes away is the sprawling Al Jazeera TV headquarters, where one of its longest running programs is hosted by a spiritual leader of the Muslim Brotherhood, which has condoned homicide bombings against Israel. During the Iraq War, Central Command claimed U.S. troops came under fire from an Al Jazeera office in Baghdad.

The close proximity of groups that advocate or support violence is no coincidence. Qatar, a country the size of New Jersey and whose 2.6 million residents enjoy the highest per-capita income in the world, has played a dangerous diplomatic game during the war on terror.

“Qatar, nominally an American ally, regularly aids in the whitewashing of terrorist organizations,” said Jonathan Schanzer of the Foundation for the Defense of Democracies in a recent op-ed.

According to experts like Schanzer, Qatar is a terrorist ATM. Qatar has given Hamas at least $1.4 billion, part of which the terror group has reportedly vowed to spend on new terror tunnels. In April, details were finalized with an Al Qaeda affiliate to pay a $1 billion ransom to win release of a Qatari royal family hunting party that had been captured in Southern Iraq.

The Obama administration’s terrorism-finance officials said last year that Qatar has demonstrated “a lack of political will to effectively enforce their combating terrorist financing laws.” Treasury officials have said that “designated terrorist financiers” are “operating openly and notoriously” in the country.

A recent report by the Foundation for Defense of Democracies was unable to find “a single specific instance of Qatar charging, convicting, and jailing a U.S. or U.N.-designated individual.” In short, the FDD said “terrorists roam free” in Qatar. When President Obama released prisoners accused of terrorism from Guantanamo Bay, they ended up in Qatar.

Nevertheless, the country has been an important ally in the war on terror, and a financier of global business. Since 2014, the U.S. has flown thousands of bombing missions by B1B’s, B-52’s and others based at Qatar’s Al Udeid Air Base against the Islamic State. When pressed on Tuesday about a tweet by President Trump pointing at “radical ideology” in Qatar, the Pentagon stood by the Qataris for their “longstanding support.”

“We have no plans to change our posture in Qatar,” said Major Adrian J.T. Rankine-Galloway, a Pentagon spokesman.

The country is the world’s biggest producer of liquefied natural gas. Through its $335 billion sovereign wealth fund, it owns stakes in multinational companies like Volkswagen and Barclay’s as well as extensive U.S. real estate holdings.

Qatar’s support of the Muslim Brotherhood is especially controversial because there is little agreement over whether to designate the group a “Foreign Terrorist Organization,” similar to Hamas. As Fox News has reported, Qatar has funneled money into influential Washington think-tanks that have resisted calls for giving the Brotherhood an FTO designation.

That’s after years of Obama administration refusal to criticize the group’s alleged ties to terrorist groups like Hamas, Al Qaeda or ISIS. When asked in an interview with Fox News in 2011 if the Brotherhood was a threat to the United States, Obama said “they are well organized and there are strains of their ideology that are anti-U.S.” but did not call them a threat.  In a response to a 2013 petition to call the group a terrorist organization, the White House pushed back.

HAMAS DENIES QATAR TO EXPEL LEADERS, BUT SAYS SOME TO MOVE

“We have not seen credible evidence that the Muslim Brotherhood has renounced its decades-long commitment to non-violence,” the White House said in a statement.

But experts told Fox News that there are branches of the Brotherhood that, upon further examination, are very likely to show direct support for terrorist operations in places like Egypt and Yemen.

The group’s Washington advocates say that the Muslim Brotherhood is a mainstream non-violent political organization, albeit one that advocates Sharia law. The Brotherhood's English-language website describes Sharia as "the basis for controlling the affairs of state and society.” As former Defense Secretary Robert Gates recently put it, the Brotherhood’s actions in Egypt put a “lie” to the claim it is a moderate force.

Brotherhood leader “Mohamed Morsi intended to become a dictator, an authoritarian,” Gates told Fox News, “And the Muslim Brotherhood established an authoritarian government in Egypt. And it didn't take very long until they also changed the constitution to embrace Sharia Law.”

The leader of the military-backed counter coup told Fox News in 2015 that this was indeed a pivotal moment for revealing the Brotherhood’s true intentions.

“From a religious point of view, how you can kill your own fellow citizens, your own people, your own community – just for the sake of political leadership?” said Egyptian President Abdel Fatah el-Sisi, “The Egyptians people feel that the Brotherhood turned their lives into a living hell.”

When the United Arab Emirates designated the Brotherhood a terror organization in 2014, it shocked the Obama administration by including two groups considered mainstream here in the United States: the Council on American Islamic Relations (CAIR) and the Muslim American Society (MAS). Both have ties to the Brotherhood, but the MAS was created by it.

“Our threshold is quite low when we talk about extremism,” said UAE Foreign Minister Sheikh Abdullah bin Zayed Al-Nahyan. “We cannot accept incitement or funding. For many countries, the definition of terror is that you have to carry a weapon or terrorize people. For us, it’s far beyond that. We cannot tolerate even the smallest amount of terrorism.”