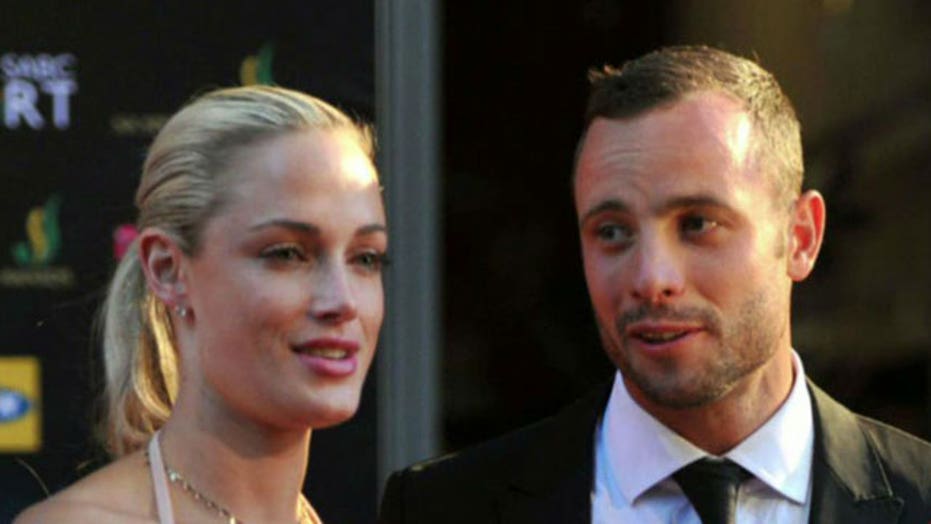 Pistorius: 'I blame myself for taking Reeva's life'

Olympian breaks down on stand

PRETORIA, South Africa – The chief prosecutor in the murder trial of Oscar Pistorius on Monday accused him of tailoring his version of how he killed his girlfriend to fit evidence at the scene, exhaustively listing alleged inconsistencies in the athlete's account of the fatal shooting of Reeva Steenkamp.

The court temporarily adjourned late in the morning after the double-amputee runner started to sob while testifying about the moments before he killed Steenkamp in his home in the early hours of Feb. 14, 2013. Chief prosecutor Gerrie Nel had asked him what exactly he shouted as he moved toward the bathroom where he shot Steenkamp, who was behind a closed door in the toilet cubicle.

Pistorius said he thought there was an intruder in the house. After a long pause after the question, he said he screamed, using an expletive, for the purported intruder to get out of his house. As he testified, Pistorius began to wail and Judge Thokozile Masipa called an adjournment. Just over an hour later and after court resumed, Pistorius again broke down when replying to a question on why he had opened fire, causing a second adjournment.

The prosecution has said Pistorius' account of a mistaken shooting is a lie. Nel opened the fourth day of cross-examination by alleging that Pistorius had "concocted" his account of the shooting.

"You're tailoring your version as you're sitting there," Nel said. Later, he accused Pistorius of being a stickler for detail on some matters, in contrast to his frequent statements on the witness stand that he could not remember aspects of his testimony.

Nel noted that Pistorius earlier said he warned Steenkamp to call police about an intruder in a whisper, contradicting later testimony that he spoke in a "low tone" and the prosecutor also said blood spatter evidence indicated that the athlete's statement about the location of a duvet in the bedroom was false.

Pistorius has said the duvet was on the bed, and that police photographs of the bed cover on the floor suggest that police moved it there after the shooting. Nel said a pattern of blood drops on the duvet and on the carpet nearby show that it was on the floor before police arrived, and that its location amounts to evidence that the couple had been having an argument.

The prosecutor also alleged that Steenkamp was in the process of getting dressed in the midst of the nighttime argument and wanted to leave Pistorius' house shortly before the shooting. A pair of jeans strewn on the bedroom floor showed Steenkamp was putting them on, Nel said, and contrasted with her character as a neat person who wouldn't leave clothes lying around.

Nel also questioned why the athlete didn't give fuller details of his account in his bail statement last February, days after he killed Steenkamp. Pistorius had said then that there was a noise from the bathroom that caused him to think that people had broken into his house, but didn't explain until later that it was the bathroom window sliding across and slamming against the frame.

The athlete said Monday that he was on medication and traumatized while in a jail cell at the time of his bail statement, which could account for any discrepancies with his later testimony.

Nel also said it was improbable that, in Pistorius' story, Steenkamp didn't ask him why he was getting out of bed in the middle of the night to retrieve fans from the edge of the balcony.