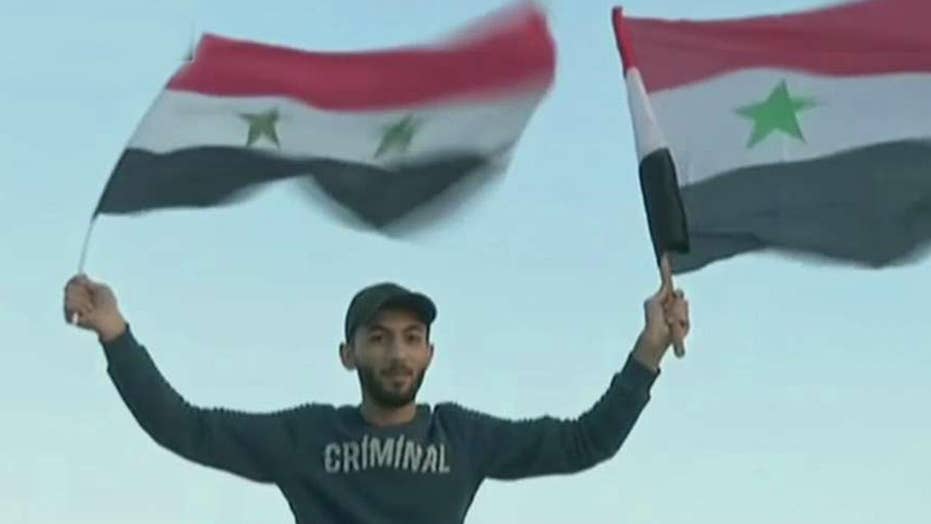 Pro-government supporters flooded the streets of Syria’s capital at daybreak Saturday in a show of nationalistic pride after airstrikes by the U.S., Britain and France against the regime of Bashar al-Assad.

Convoys of honking cars accompanied Syrian flags and victory signs in Damascus’ Omayyad Square immediately after the attack. Some residents waved the flags of regime allies Russia and Iran, while others clapped and danced in a show of defiance.

"We're going around in our car to prove to the whole world that Syria is fine and that everything is fine," one driver told Syrian state television, the Los Angeles Times reported.

Syrian TV broadcast live from the square where a crowd of civilians and men in uniforms amassed.

"We are your men, Bashar," they shouted.

The national song, "Oh Syria, You Are My Love," boomed from a car’s loudspeakers as it drove through central Damascus amid the attack.

A convoy of cars with pro-government supporters in Damascus. (Associated Press)

A BBC news producer tweeted a video of the morning scene’s celebratory atmosphere.

The U.S.-led coalition strikes came after a suspected chemical attack by the regime last weekend in rebel-held Douma, a town about 10 miles east of Damascus, killed at least 40 people and injured more than 500, mostly women and children. The attack occurred amid a resumed offensive by Syrian government forces after the collapse of a truce.

Syrian TV said three civilians were wounded in one of the U.S.-led strikes on a military base in Homs, although the attack was aborted by derailing the incoming missile.

"Good souls will not be humiliated," Syria's presidency tweeted after the airstrikes began.