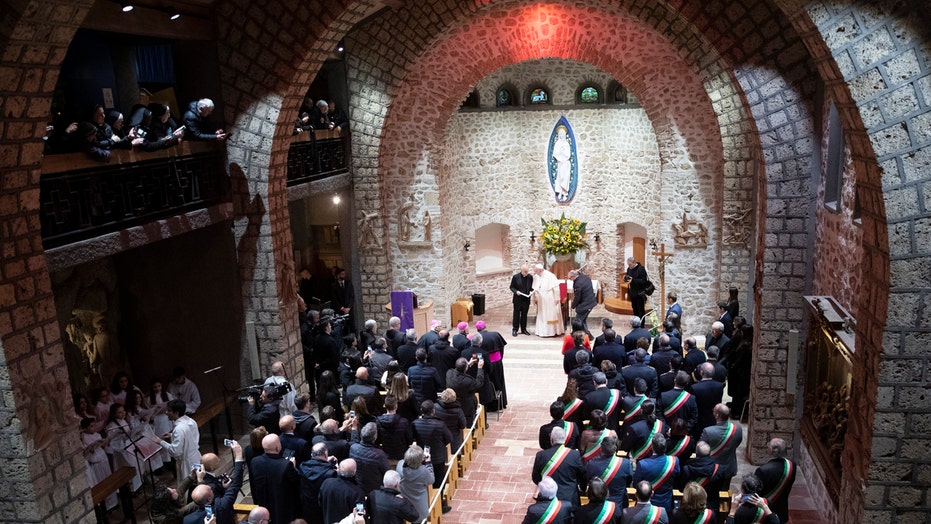 Without addressing the so-called "war on Christmas," Pope Francis called on believers to erect Nativity scenes as a sign of the Christian faith by placing them in schools, workplaces and town squares.

Nativity scenes, which represent the birth of Jesus, is a Christmas tradition that has been legally challenged by atheist groups all across the United States.

Kicking off Advent Sunday, Francis made the remarks in the Italian hill town of Greccio, where St. Francis of Assisi, the pontiff's namesake, reenacted the first Nativity scene, using live people instead of statues. The reenactment was likely in 1223, after a pilgrimage to the Holy Land visiting Bethlehem, the birthplace of Jesus.

HOLIDAY TRADITIONS: GOING AROUND THE WORLD TO COLLECT NATIVITY SCENES, EACH WITH A CULTURAL TOUCH

"I wish to encourage the beautiful family tradition of preparing the Nativity scene in the days before Christmas, but also the custom of setting it up in the workplace, in schools, hospitals, prisons, and town squares,” the pope wrote in the letter, which was read aloud to faithful gathered inside a small, stone church in Greccio, saying that parents and grandparents enjoy this "joyful" tradition.

“It is my hope that this custom will never be lost and that, wherever it has fallen into disuse, it can be rediscovered and revived,’’ he added.

Francis made no mention of the Nativity scenes that have been removed from public property in the United States in the name of separation of church and state amid legal battles that have made their way to the Supreme Court.

The Supreme Court ruled in favor of Nativity scenes in public places in 1984, ruling they had "legitimate secular purposes."

But since the ruling, Nativity scenes have faced legal challenges or opposition all across the country. Last December, a small town in Delaware ordered a Catholic church to remove a Nativity scene displayed on city property, in just one recent example.

Pope Francis said the humble scene can teach observers not to get caught up in holiday consumerism.

“When you live for things, things are never enough, greed grows, other people become obstacles in a race,” he said, urging people to “resist the blinding lights of consumerism, which will shine everywhere this month.”