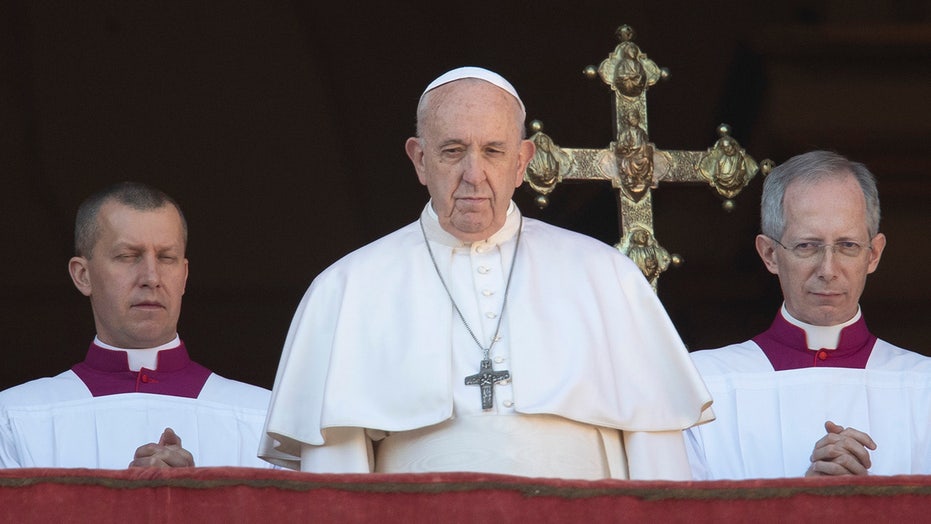 Pope Francis offered a message of hope during his traditional Christmas Day Mass in St. Peter’s Square, telling the thousands who attended the service that “the light of Christ is greater” than the darkness “in human hearts” and “in economic, geopolitical and ecological conflicts.”

Tens of thousands of tourists, pilgrims and Romans gathered for the traditional Christmas message. The pope was flanked by Cardinal Renato Raffaele Martino, president of the papal council for migrants, and Cardinal Konrad Krajewski, the pope’s official almsgiver.

Pope Francis cited the Syrian people “who still see no end to the hostilities that have rent their country over the last decade” and Israel, where Jesus “was born as the savior of mankind and where so many people -- struggling but not discouraged -- still await a time of peace, security and prosperity.”

Pope Francis looks at the crowd after he delivered the Urbi et Orbi (Latin for 'to the city and to the world' ) Christmas' day blessing from the main balcony of St. Peter's Basilica at the Vatican, Wednesday, Dec. 25, 2019. (AP Photo/Alessandra Tarantino)

The pope expanded on his remarks about migrants, saying they were forced by injustice “to emigrate in the hope of a secure life.” Francis said their injustice continues along their journey toward finding acceptance. The pope said migrants often face abuse, enslavement, and torture in “inhumane detention camps” and death during dangerous sea excursions to find freedom elsewhere.

POPE FRANCIS WARNS OF ‘RIGIDITY,’ SAYS CHURCH MUST ADAPT OR IT WILL BECOME INCREASINGLY IRRELEVANT

Francis called for the easing of crises in Lebanon and Iraq and the “grave humanitarian crisis” in Yemen. He noted that several countries in the Americas are “experiencing a time of social and political upheaval,” citing the strife in Venezuela.

The pope offered prayers for those in several African nations, including where people have been “persecuted for their religious faith.”