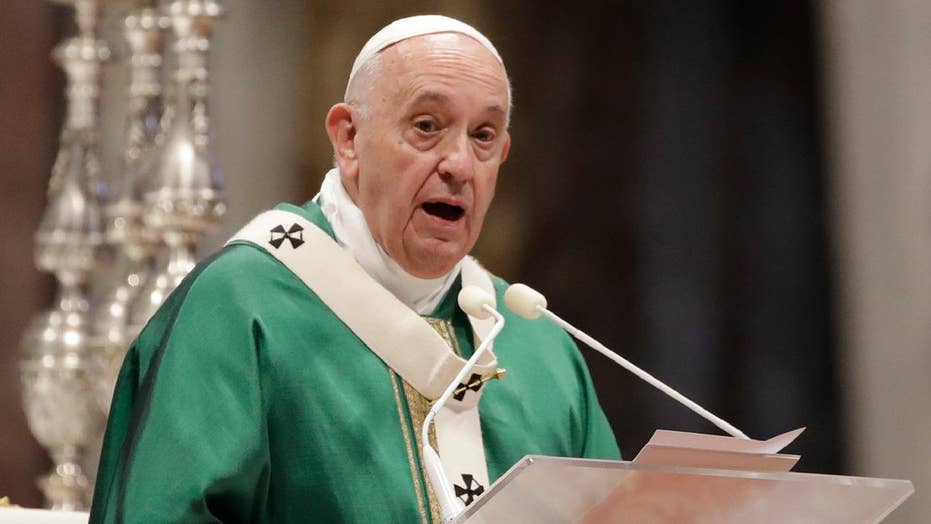 Pope Francis, in a Saturday message delivered from the Vatican, took aim at conservative Catholics, warning that “rigidity” in living out the Christian faith was turning people away, and that the church must adapt to a post-Christian west.

Francis called for Vatican bureaucrats to embrace change during his annual Christmas greeting to the cardinals, bishops and priests who work in the Holy See.

Pope Francis exchanges greetings with Cardinal Angelo Sodano, left, on the occasion of the pontiff's Christmas greetings to the Roman Curia, in the Clementine Hall at the Vatican. (AP)

Catholicism’s conservative wing has increasingly voiced opposition to Francis’ progressive-minded papacy. Their criticisms have accelerated in the past year, amid Vatican financial and sex abuse scandals.

Francis acknowledged in his address that Christianity no longer holds the influence in society that it once did. He cited the late Cardinal Carlo Maria Martini, a leader of the progressive wing of the Catholic Church, who lamented before dying that the church found itself "200 years behind" because of its fear of change.

"Today we are no longer the only ones that produce culture, no longer the first nor the most listened to," Francis told the prelates. "The faith in Europe and in much of the West is no longer an obvious presumption but is often denied, derided, marginalized and ridiculed."

As a result, he urged the Catholic hierarchy to embrace the necessary pastoral reforms that will make the church attractive so that it can spread the faith.

"Here we have to beware of the temptation of assuming a rigid outlook," Francis said. "Rigidity that is born from fear of change and ends up disseminating stakes and obstacles in the ground of the common good, turning it into a minefield of misunderstanding and hatred."

Traditionalist Catholics have denounced Francis' openness on issues such as sacraments for divorced and civilly remarried Catholics. They have also sharply criticized his recent synod on the Amazon, which called for the ordination of married men as priests.

Francis has defended his stance as a reflection of the Gospel, and the axiom that the true tradition of the church is one of a continuous, discerned path of change.

"Tradition is not static, it's dynamic," he said Saturday.