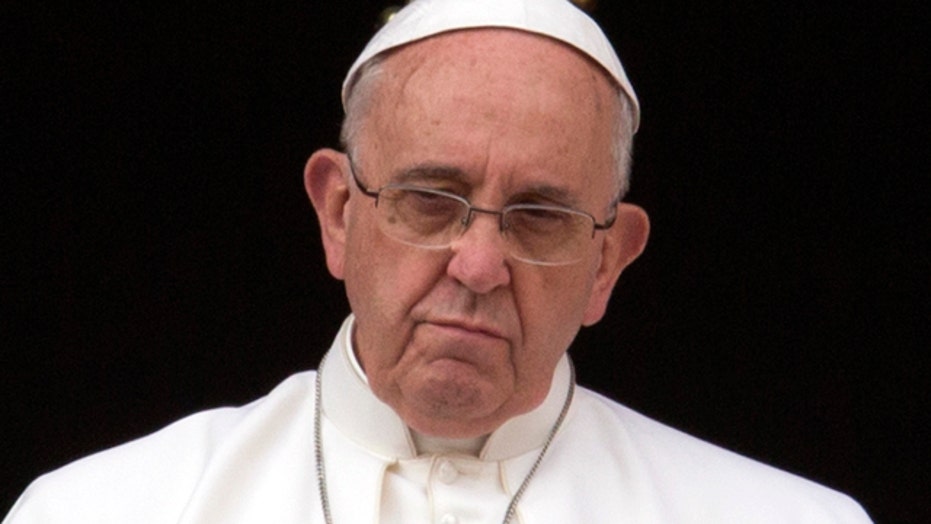 Pope Francis prayed for hope and peace on Thursday, focusing on refugees, hostages and others suffering in the Middle East, Africa and Ukraine.

Anguish for children who are victims of violence, including in the recent terrorist attack on a Pakistani military school, tempered the pontiff's traditional Christmas Day message, which he delivered from the central balcony of St. Peter's Basilica. Tens of thousands of Romans and tourists crowded into St. Peter's Square to hear Francis deliver the "Urbi et Orbi" message. (Latin for "to the city and to the world.")

"Truly there are so many tears this Christmas," Francis said after noting all the pain and suffering in the world.

The pope lamented that there were vast numbers of children who are "made objects of trade and trafficking" or forced to become soldiers.

Francis began his review of the world's troubled places by recalling the persecution of ancient Christian communities in Iraq and Syria, along with those from other ethnic and religious groups.

"May Christmas bring them hope," he said.

Referring to refugees and exiles, he prayed: "May indifference be changed into the necessary humanitarian help to overcome the rigors of winter."

The pope also thanked those courageously helping people infected with Ebola in Africa.

He prayed, too, that those in affluent countries, who are "immersed in worldliness and indifference," will experience a softening of heart.

Francis celebrated Christmas Eve Mass late Wednesday night in St. Peter’s Basilica and made a phone call to Iraqi refugees who were forced to leave their homes because of Muslim militants.

"You're like Jesus on this night, and I bless you and am close to you," Francis told the Iraqis, according to the audio of the call provided by TV2000, the television of the Italian bishops' conference which arranged the hookup. "I embrace you all and wish for you a holy Christmas."

Francis met with the refugees at a tent camp in Ankawa in northern Iraq. Ankawa houses mostly Christian refugees forced to flee their homes because of the onslaught my ISIS militants. In a letter to Mideast Christians penned earlier this week, Francis urged them to remain in the region, where Christian communities have existed for 2,000 years, and to help their fellow Muslim citizens present "a more authentic image of Islam" as a religion of peace.

During the Mass hours later in St. Peter's, Francis echoed some of the themes he raised in the phone call as he reflected on the Nativity scene.

The phone call and nighttime Mass kicked off a busy few weeks for the 78-year-old pontiff that includes his traditional Christmas day speech, New Year's Eve vespers, and 2015 greetings a few hours later. On Jan. 6 he'll celebrate Epiphany Mass, and on Jan. 11 he'll baptize babies in the Sistine Chapel. A day later he gives his annual foreign policy address to diplomats accredited to the Holy See before boarding a plane for a weeklong trip to Sri Lanka and the Philippines.

The Mass came just days after Francis excoriated the Vatican bureaucracy for their sins.

Many of the same cardinals, bishops and priests who received the dressing down were on hand for the Mass. Several have spoken out in recent days saying Francis was merely asking them to examine their consciences, as any Jesuit spiritual director would do, and to use the Christmas season to heal.