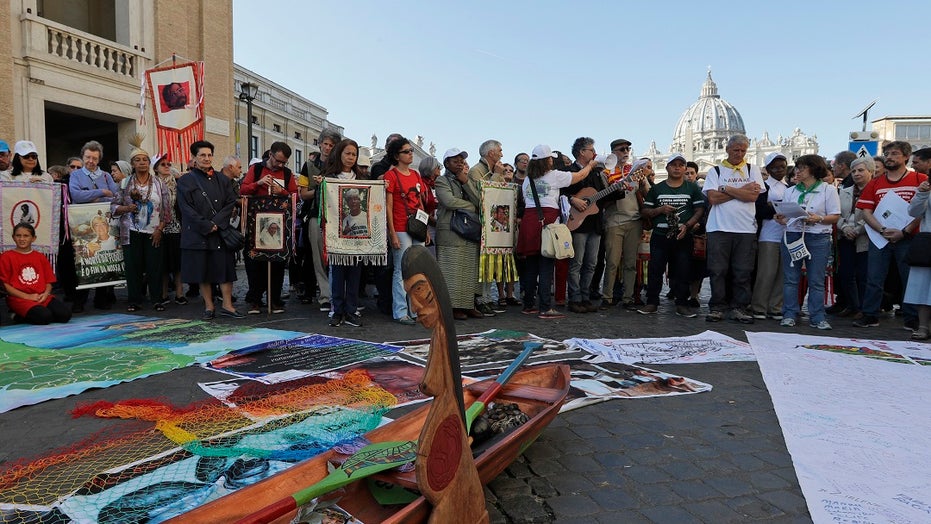 Pope Francis asked Amazonian bishops and tribal leaders for forgiveness Friday after indigenous statues were stolen from a Vatican-area church and thrown into a nearby river.

The wood-carved figures of naked pregnant women, known as Pachamama, were brought to the Vatican to be displayed during the pope's three-week assembly of Amazonian clergy, called a synod.

The pope insisted there was no intention of idolatry, which undercut conservative claims that the statues are symbols of pagan worship.

"Above all, this happened in Rome and as the bishop of this diocese I ask forgiveness of the people who were offended by this gesture," Francis told the synod hall.

The Vatican has said the statues are symbols of life, fertility and Mother Earth.

Members of Amazon indigenous populations walk during a Via Crucis, or Way of the Cross, procession to the Vatican. In foreground is a wooden statue portraying a naked pregnant woman. (AP Photo/Andrew Medichini)

The wooden figures were found unharmed in the Tiber River this week. The pope said he would consider having them displayed during the final Mass of the synod on Sunday.

The theft was caught on surveillance video Monday as thieves took the figures from the Santa Maria in Traspontina church, just down the block from St. Peter's Square.

The video appeared to show at least two men enter the church before dawn, take the statues placed at an altar and then throw them in the river. The act was celebrated by conservative Catholics who deemed the statues pagan idols.

Cardinal Gerhard Mueller, the conservative German fired by Francis in 2017 as the Vatican's doctrine chief, said it was a "great mistake" to bring the statues to the Vatican in the first place.

Pope Francis’ meeting about the Amazon is wrapping up after three weeks of debate over married priests, the environment and the destruction of indigenous statues that underscored the willingness of conservatives to violently vent their opposition to the pope. (AP Photo/Andrew Medichini)

"To throw it out can be against human law, but to bring the idols into the church was a grave sin, a crime against divine law," he told conservative U.S. Catholic broadcaster EWTN.

While the theft was cheered by conservative Catholics, progressives denounced the act as racism.

"Can you imagine the conservative outcry if someone tossed the image of Our Lady of Czestochowa into the Tiber?" the National Catholic Reporter, a progressive Catholic magazine, said in an editorial this week. "We do not use the term 'racists' lightly, but what else is it?"

The meeting of more than 180 bishops and cardinals from nine Amazonian nations will conclude Saturday. The religious leaders plan to vote on a final document synthesizing proposals to better protect the Amazon rainforest and minister to its indigenous peoples.