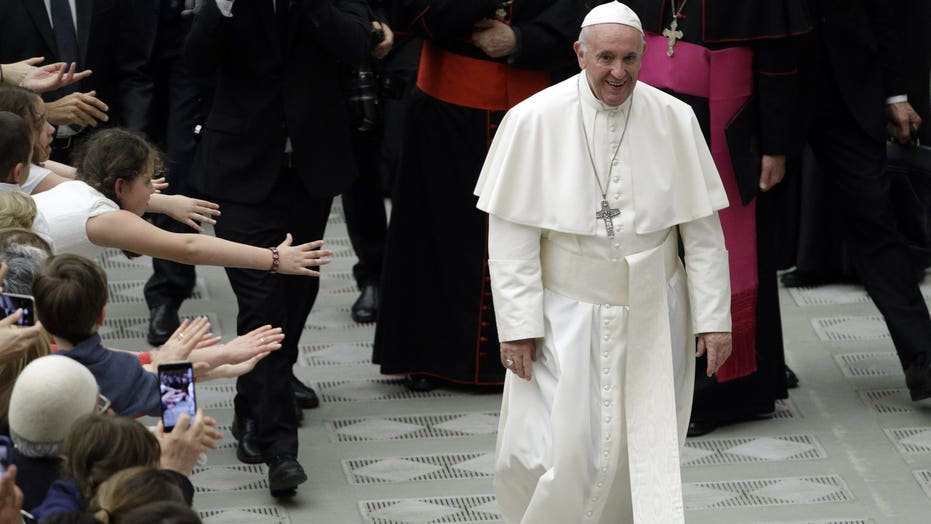 Pope Francis on Saturday likened abortion to hiring a hitman and said the procedure can never be condoned, even if the unborn child is gravely sick or likely to die.

Francis made the comments during a pro-life conference sponsored by the Vatican. He stressed that abortion isn’t a religious issue but a human one.

The pope also condemned abortion decisions based on prenatal testing, stating that a human being is “never incompatible with life.”

This applies to those babies who are destined to die at birth or soon after, he said. He stressed the importance of providing medical care to such babies in the womb and support their parents so they don’t feel afraid and isolated.

2020 DEMS JUMP INTO ABORTION FRAY AS LEGAL BATTLE HEATS UP

“Taking care of these children helps parents to grieve and not only think of it as a loss, but as a step on a path taken together,” Francis said.

Pope Francis arrives for an audience with participants of a pilgrimage of the Italian-Albanian diocese of Lungro, in the Pope Paul VI hall, at the Vatican, Saturday, May 25, 2019. (AP Photo/Andrew Medichini)

The latest comments follow the Pope’s previous condemnations of abortion, though he struck a somewhat more conciliatory tone towards the women who had the procedure and made it easier for them to be absolved of the sin of abortion.

His comments also came in the wake of a raging abortion debate in the U.S., where multiple states severely limited or banned abortion after six weeks, prompting outcry by pro-choice advocates.