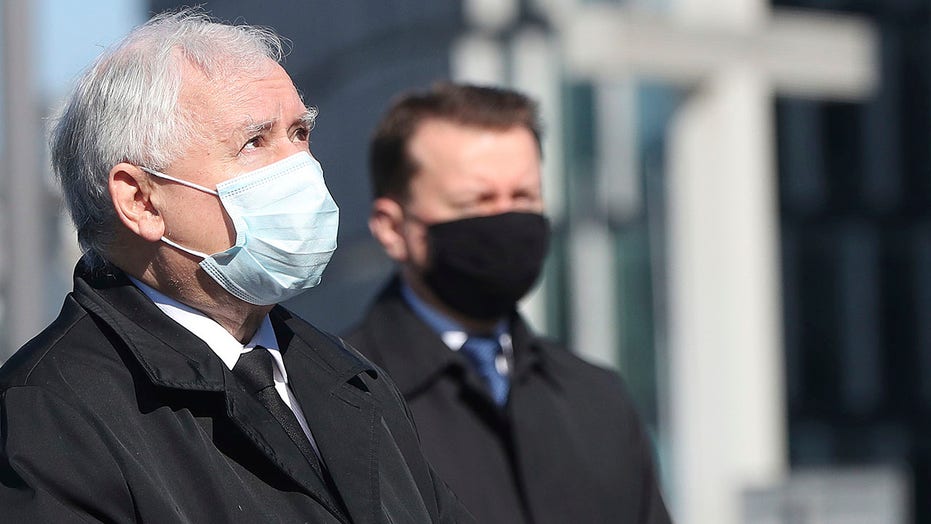 Poland’s presidential election on Sunday did not take place due to the coronavirus outbreak, although the vote was never officially canceled.

The election was suspended over a heated debate for how voting can be done during the COVID-19 pandemic, leading to a bizarre “ghost” election that resulted in a zero percent turnout.

“In the ... election scheduled for May 10, 2020, there was no possibility of voting for candidates,” the State Electoral Commission said in a statement, according to Reuters.

The conservative government had proposed an all-postal vote, but criticism of the plan and infighting complicated preparations and led to the postponement.

Poland's ruling party leader Jaroslaw Kaczynski, left, and a member of the ruling party, wearing a mask, pray at the monument to the late President Lech Kaczynski, the party leader's twin, killed with 95 others in a plane crash April 10, 2010 in Russia, on Sunday in Warsaw. Poland was to hold presidential election Sunday but the anti-coronavirus lockdown and political infighting made it impossible and there is no voting. (AP Photo/Czarek Sokolowski)

Stanislaw Mocek, a political scientist based in Warsaw, echoed the confusion among Poles over the election that never took place when speaking to AFP.

"We're in a fog of legal absurdity," he said.

Tomasz Trela, a leftist lawmaker, told reporters at a closed polling station that it was “election day without the election.” He said it was unclear who canceled the election and for what reasons, according to the outlet.

Parliament has 14 days to set a new date for presidential elections, which must be held within 60 days of this announcement, or by late July, according to the resolution by the electoral commission.

President Andrzej Duda is running for reelection with the support of the ruling coalition, the nationalist Law and Justice party. His term expires Aug. 6.

It was the first time in almost 31 years of Polish democracy that voting in line with the constitution did not take place.

Poland has at least 16,326 confirmed coronavirus cases and 811 deaths as of Monday.