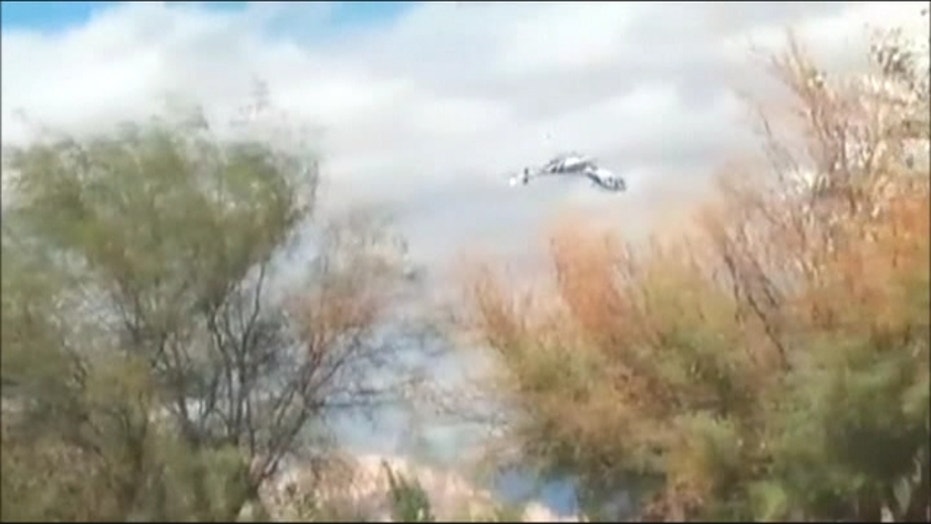 VILLA CASTELLI, Argentina (AP) – The two helicopters had just taken off and were flying in tandem over some of Argentina's most rugged terrain in the foothills of the Andes, carrying well-known French athletes and others who were participating in the popular TV reality show "Dropped."

A video that circulated widely on the Internet Tuesday shows that one of the aircrafts suddenly swerves, its blades hitting the rails of the second, causing both aircraft to lose control and plummet to the ground. The two Eurocopters came down about 50 feet apart and were destroyed, killing all 10 people on board, with one chopper so badly burned that only the blades were recognizable.

The helicopters were in good condition and both Argentine pilots were qualified and experienced, family and officials said Tuesday, with speculation on why the collision happened ranging from blinding sunlight to the thermal updrafts that are common in the hot, cactus-filled landscape.

Andrés Navarrete, mayor of Lamadrid, the northwestern municipality that includes the town of Villa Castelli close to the crash site, said one of the pilots, Juan Carlos Castillo, had "an entire life of experiences" flying helicopters.

Monday's crash, which killed eight French nationals and the two Argentine pilots, sent France into mourning and raised questions about the dangers of filming survivalist reality programs in far-flung lands under extreme conditions.

The harsh terrain where the helicopters went down prevented authorities from recovering the bodies until Tuesday. Investigators then began picking through the wreckage, removing cellphones, mangled chunks of the aircraft and other charred and unrecognizable items.

Among the victims were Olympic champion swimmer Camille Muffat, Olympic bronze-medalist boxer Alexis Vastine and pioneering sailor Florence Arthaud. They were contestants on "Dropped," which was being shot in the sparsely populated region.

The aviation director La Rioja province, Daniel Gorkich, told the Associated Press that both aircraft were in good shape and that Castillo and the other pilot, Roberto Abate, were highly trained. He pointed to the afternoon sun and strong winds as possible factors in the accident.

At the moment of impact "the sun was setting on the Andes mountain range directly in front of them. Also this is an area with wind gusts," Gorkich said.

Cristina Alvarez, wife of the pilot Castillo, told television station Todo Noticias that her husband was a veteran of the Falklands War in 1982 and had extensive experience flying helicopters, including in challenging places like Antarctica.

French officials said they would work with Argentine investigators to determine the cause of the accident. A team of French experts planned to arrive at the crash site Wednesday.

Monday's crash was one of the deadliest incidents yet related to reality TV shows, whose production companies have been going to remoter places and perhaps taking more risk as they strive to distinguish themselves in a very crowded media market.

Reality adventure series have ranged around the world since the genre took hold. "Survivor" started in Borneo in 2000, "The Amazing Race" kicked off in Africa in 2001 and even "I'm a Celebrity, Get Me Out of Here!", filmed in Australia for the British and U.S. versions as well as Costa Rica for the U.S. show.

"Dropped" was being carried by TF1, France's leading private-sector network. It canceled another reality show two years ago after a 25-year-old participant died of a heart attack on the first day of filming in Cambodia.

Late Tuesday, "Dropped" director Louis Bodin told Argentine television station Todo Noticias that the crew was in shock and the show would be suspended.

"We don't have the heart to continue with the program, but maybe in the future we'll pick it back up because its concept is beautiful," said Bodin. "At the moment, we are very sad."

Sophie Kamoun, a friend and agent for Muffat, said the reality show was a joy for the 25-year-old swimmer who won gold, silver and bronze medals in the 2012 London Olympics.

"She had dedicated a lot of her life to swimming to become Olympic champion, and her objective since her retirement was to make a success of her (personal) life," Kamoun said. "She had a lot of projects that made her happy, and this show was one of them. I spoke to her on the phone two days ago and she told me she'd spent a fabulous week, one of the best of her life."