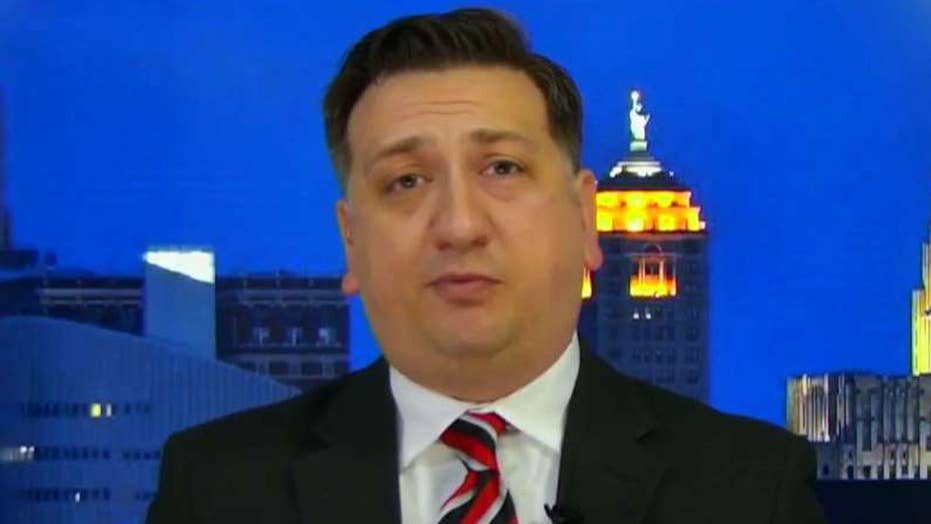 US veteran on why North Korea's threats are serious

WASHINGTON – President Donald Trump has labeled North Korea a "problem" country and says it will be dealt with through a broad -- and vague -- set of options. It may be up to his vice president, Mike Pence, to fill in the details when he arrives in Asia.

Pence will be diving into a tense standoff along the Korean Peninsula with visits to South Korea and Japan beginning Sunday. His travels to the Asia-Pacific region come amid indications that North Korea is potentially preparing its sixth nuclear test in a decade or a significant missile launch, such as its first flight test of an intercontinental ballistic missile.

Trump, who has proven to be unpredictable on foreign policy, has responded to the recent concerns over North Korea with a swagger that suggests a new, tougher stance. Asked about North Korea this week, he told reporters: "North Korea is a problem. The problem will be taken care of." He has repeatedly declared that if China, North Korea's dominant trading partner, isn't willing to do more to squeeze the North, the U.S. might take the matter into its own hands.

The remarks came with a show of military might, as an aircraft carrier head to waters off the Korean Peninsula. However, military officials have said the U.S. doesn't intend to use military force against North Korea in response to either a nuclear test or a missile launch.

Tough rhetoric aside, Trump's advisers have chosen a policy that appears to hew to that of the Obama administration.

After a two-month policy review, officials settled on a policy dubbed "maximum pressure and engagement," U.S. officials said Friday. The administration's immediate emphasis, the officials said, will be on increasing pressure on Pyongyang with the help of Beijing.

The officials weren't authorized to speak publicly on the results of the policy review and requested anonymity.

Pence is tasked with explaining the policy in meetings with leaders in South Korea and Japan at the start of a 10-day tour that will include stops in Indonesia and Australia.

Part of his mission will be to reassure allies in South Korea and Japan that the U.S. will defend them against North Korean aggression without acting in a way that might tip the region into open conflict.

"The message, I think, is going to be about vigilance and deterrence," said Victor Cha, the Korea chair at the Center for Strategic and International Studies. He said Pence will try to balance reassurance with a willingness to respond if North Korea acts. "The United States wants to project a more muscular image when it comes to the policy so some unpredictability serves that cause."

North Korean leader Kim Jong Un has pointed to nuclear weapons as the foundation of his national defense strategy and has openly sought a nuclear weapon that could strike the continental U.S. Analysts have said commercial satellite images from recent weeks indicate increased activity around the nuclear test site in northern North Korea.

North Korea has a history of marking significant dates with a show of military force, and Pence's arrival will come a day after the country celebrates its most important holiday on Saturday, the 105th birth anniversary of the country's late founder, Kim Il Sung, the grandfather of its current leader.

The U.S., which last week acted unilaterally in ordering a cruise missile strike on Syria, has recently dispatched what Trump called an "armada," including an aircraft carrier, into waters off the Korean Peninsula. Thousands of U.S. and South Korean troops, tanks and other weaponry were also deployed last month in their biggest-ever joint military exercises, which prompted North Korea to issue routine threats of attacks on its rival if they show signs of aggression.

Ahead of Pence's arrival, North Korea's vice foreign minister told The Associated Press in an interview that Trump was the culprit of escalating tensions through his tweets and expansion of military exercises, arguing that the U.S. was becoming "more vicious and more aggressive" under Trump compared to his predecessor.

While in South Korea, Pence will meet with South Korean Prime Minister Hwang Kyo-ahn, the country's acting head of state in place of ousted President Park Geun-hye, who was recently arrested over a corruption scandal. Pence will also participate in a session with local business leaders.

Pence plans to depart South Korea on Tuesday for Japan, where he will meet with Prime Minister Shinzo Abe and hold economic discussions with top Japanese officials.