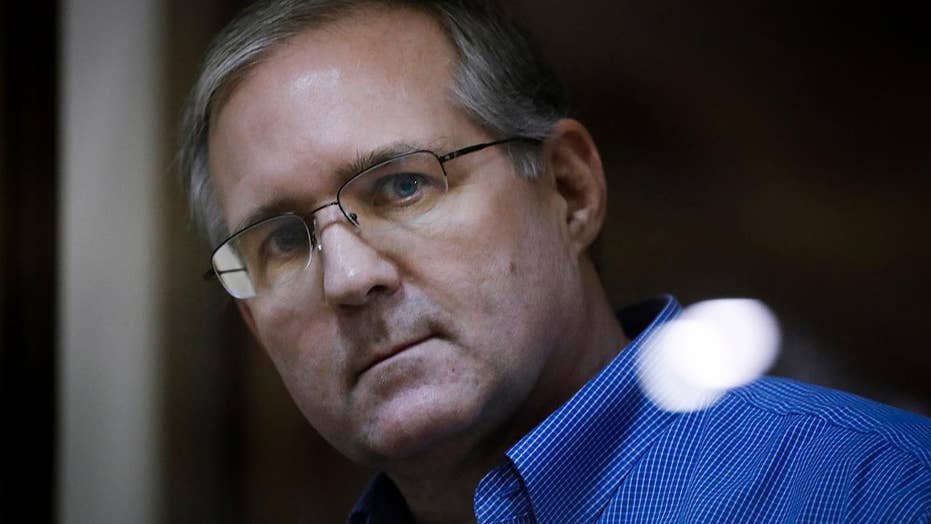 The former U.S. Marine being held in Moscow for alleged spying will remain behind bars for at least another three months pending an investigation, a court announced Friday.

Paul Whelan was arrested by Russian officials in December after he was handed a flash-drive with classified information that he had been unaware of, his lawyer says. Whelan’s brother, David, insists he is not a spy and said in January it “sounds like he was set up.”

The court in Moscow ruled to keep Whelan, who arrived Friday under escort by a masked man, imprisoned until May, despite not yet being formally charged.

Meanwhile, the U.S. Embassy complained that Russian authorities are not letting Whelan sign and hand over a waiver that would allow consular officials to release more details about his case.

KIN OF ACCUSED SPY PAUL WHELAN DEFENDS HIM: ‘SOUNDS LIKE HE WAS SET UP’

Paul Whelan, a former U.S. Marine, who was arrested in Moscow at the end of last year, attends a hearing in a court in Moscow, Russia, on Friday. (AP)

The embassy said it is the first time that the Russian Investigative Committee is not allowing a U.S. national in a Russian jail to pass on a signed privacy waiver form.

"Why is this case any different? Consular access without being able to do true consular support is not real access," U.S. Embassy spokeswoman Andrea Kalan said on Twitter.

The Whelan family has been frustrated that they have so little information about the accusations against Paul. Most information has come from Russian media reports, which have suggested the flash drive that came to be in his possession contained names of people who work for a sensitive security-related branch of the government.

“We only know what has been published, which is really everything I learned on the first day when I looked it up on Google, which is that he’s been arrested for alleged violations of the espionage act,” David Whelan said in January. “And Foreign Minister Lavrov said at one point it was something to do with ‘collection,’ which is one of the elements of the espionage act.  It sounds like he was set up to me.”

A Moscow court has extended arrest for Whelan, who was detained at the end of December for alleged spying.

WHELAN HAD ‘STATE SECRETS’ ON HIM, LAWYER SAYS

If Paul Whelan were to be convicted of espionage, he could face up to 20 years behind bars. His family wants him out of Russia before a trial for such serious charges might even begin.

Whelan, 48, of Novi, Michigan, a former U.S. Marine, was born in Canada to British parents before the family moved to the U.S. He holds British, Canadian and Irish passports.

Whelan had reportedly asked an unnamed person to email him information about that person’s travels in Russia but could not download it and asked the person to put it on a flash drive.

"He was expecting to see on the flash drive some personal information like pictures or videos, something like that, about that person's previous trips around Russia," his lawyer, Vladimir Zherebenkov, told Russian news agencies in January. "We don't know how the materials that contain state secrets ended up there."

However, Whelan was detained before he could look at the documents, the lawyer said.

Whelan previously worked for Kelly Services, which maintains offices in Russia. He received a “bad conduct” discharge from the Marines, according to his official military personnel file obtained by Fox News. His dates of service were listed as starting from May 10, 1994 to Dec. 2, 2009. David Whelan says Paul fought in Iraq on multiple tours of duty.