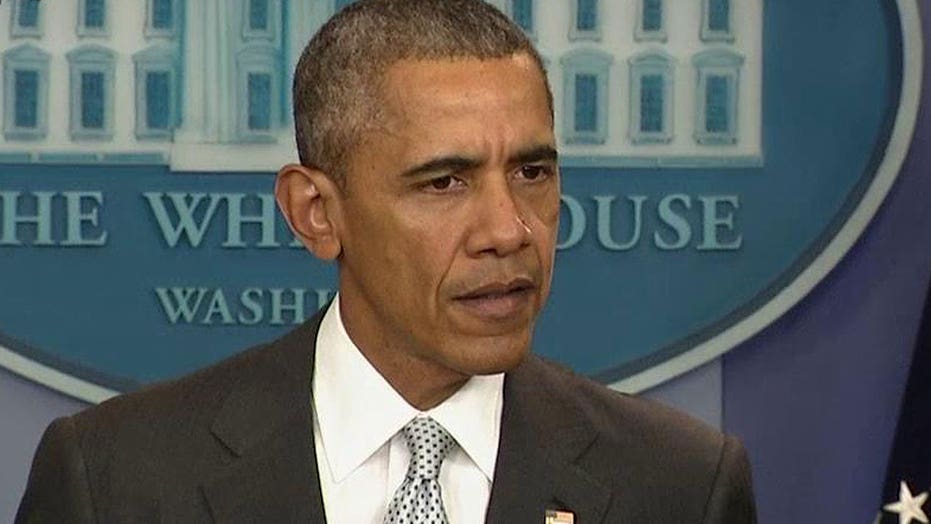 Obama: Those that think they can terrorize France are wrong

PARIS – World leaders are reacting to the deadliest violence to strike France since World War II. Some of their views:

Obama is calling the attacks on Paris "outrageous attempt to terrorize innocent civilians" and is vowing to do whatever it takes to help bring the perpetrators to justice.

Speaking to reporters at the White House, Obama said he would not speculate about who was responsible.

He called the attacks a "heartbreaking situation" and an "attack on all of humanity."

Kerry is describing the attacks in Paris as "heinous, evil" and "vile," calling them "an assault on our common humanity."

Kerry says the U.S. embassy in Paris is "making every effort to account for the welfare of American citizens in the city."

He says the U.S. stands ready "to provide whatever support the French government may require."

U.N. spokesman Stephane Dujarric says Ban "trusts that the French authorities will do all in their power to bring the perpetrators to justice quickly."

The U.N. Security Council also condemned "the barbaric and cowardly terrorist attacks," and underlined the need to bring the perpetrators of "these terrorist acts to justice."

The Vatican has condemned "in the most radical way" the terror attacks in Paris.

The Rev. Federico Lombardi said in a statement early Saturday that the violence was "an attack on peace for all humanity."

He said it requires "a decisive, supportive response on the part of all of us as we counter the spread of homicidal hatred in all of its forms."

Lombardi said the Vatican was praying for the victims and the wounded, "and for all the French people."

Merkel says she is "deeply shaken by the news and pictures that are reaching us from Paris."

The German leader issued a statement saying her thoughts were with the victims "of the apparent terrorist attack."

Rouhani has sent a message to French President Francois Hollande condemning the terror attacks in Paris that killed over 120 people.

The state-run IRNA news agency quoted Rouhani as saying Saturday that Iran "itself has been a victim of the scourge of terrorism" and the fight against terrorism must go on.

Rouhani also canceled visits to France and Italy, due in a few days. France was one of the world powers involved in recent negotiations with the Islamic Republic over its contested nuclear program.

Hossein Jaber Ansari, a Foreign Ministry spokesman, also was quoted by IRNA as saying: "Those terrorist groups that committed the Paris crimes do not believe in ethical principles and they are not loyal to any type of divine religions -- including Islam."

Cameron says he is "shocked" by the Paris attacks and violence.

Cameron said on Twitter: "Our thoughts and prayers are with the French people. We will do whatever we can to help."

Egyptian President Abdel-Fattah el-Sissi has condemned the Paris attacks and is conveying condolences to the victims.

A statement from his office on Saturday called for "concerted international efforts" to combat "the scourge of terrorism, which aims to destabilize security and stability in various parts of the world, without distinction."

The ruler of tiny Kuwait, emir Sheikh Sabah Al Ahmad Al Sabah, says in a statement that he offered his condolences, while stressing that "these criminal acts of terrorism ... run counter to all teachings of holy faith and humanitarian values."

Japan's Foreign Minister Fumio Kishida says he is "deeply shocked and outraged" by the news of the terrorist attacks in Paris.

Kishida, speaking to reporters Saturday in Hiroshima, said Japan stands by France, promising to cooperate in international fight against terrorism.

"We strongly condemn the act of terrorism, which we do not tolerate for any reason," he said, expressing condolences to the victims and their families.

Carter is calling the attacks in Paris "an assault on our common human dignity."

The Pentagon chief says "the United States stands with the people of France and its vibrant, multicultural democracy."

He is praising France as a NATO ally and a leader of the coalition fighting Islamic State militants in Syria.

"Our hearts and thoughts and prayers go out to our French cousins in this dark and terrible time," Trudeau says.

He says Canada has offered "all of our help and support to the government of France."

Lynch says the U.S. stands "in solidarity with France, as it has stood with us so often in the past."

"This is a devastating attack on our shared values and we at the Department of Justice will do everything within our power to assist and work in partnership with our French law enforcement colleagues," she said in a statement.