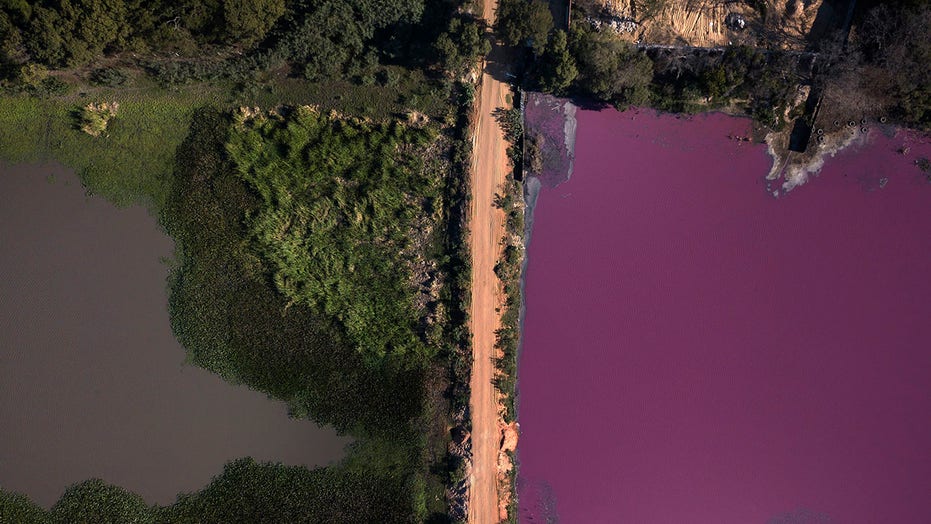 Scientists in Paraguay have been investigating how one side of the divided Cerro Lagoon turned purple and began emitting a foul odor months ago, while the other side has remained blue.

The lagoon, which flows in the city of Limpio, about 10 miles northeast of the capital Asunción, was split so an embankment and roadway carrying trucks between local factories could be built.

Residents noticed that when one side changed color several months ago, the lagoon’s fish and birds began dying. They alerted local environmental authorities to investigate.

A road divides the Cerro Lagoon, where the water below the road is colored and the Waltrading S.A. tannery stands on the bank, bottom right, in Limpio, Paraguay, on Wednesday. (AP Photo/Jorge Saenz)

“Three months ago, all the fish died in the lagoon, thousands and thousands of them,” resident Herminia Meza told the Associated Press. “The smell was unbearable, and we were overwhelmed by flies. About a month ago the herons died, and it turned a reddish color.”

Experts suspect pollution from the Waltrading SA tannery on the banks of the lagoon to be the cause.

Francisco Ferreira, a technician at the National University Multidisciplinary Lab who took samples, said Wednesday the color of the water is due to the presence of heavy metals like chromium, commonly used in the tanning of animal skins to produce leather.

Rosa Morel, an inspector with the Ministry of the Environment and Sustainable Development, told local news outlet ABC that “it is definitely the tannery that pollutes.”

Marcelo Coronel, left, and Francisco Ferreira, technicians from the National University Multidisciplinary Lab, take samples from the Cerro Lagoon where the water is colored in Limpio, Paraguay, on Wednesday. (AP Photo/Jorge Saenz)

During a previous visit, experts found a pipe presumably connected to the tannery dumping untreated waste into the lagoon, Morel said. She said authorities are demanding the company build a treatment plant for the waste.

Technicians expect the analysis from Wednesday’s samples to take about a week, lab director Gustavo Brozon, told the outlet. Testing was previously delayed due to the COVID-19 outbreak, officials said.

The company declined to speak to the media about the issue when approached Monday, ABC reported.