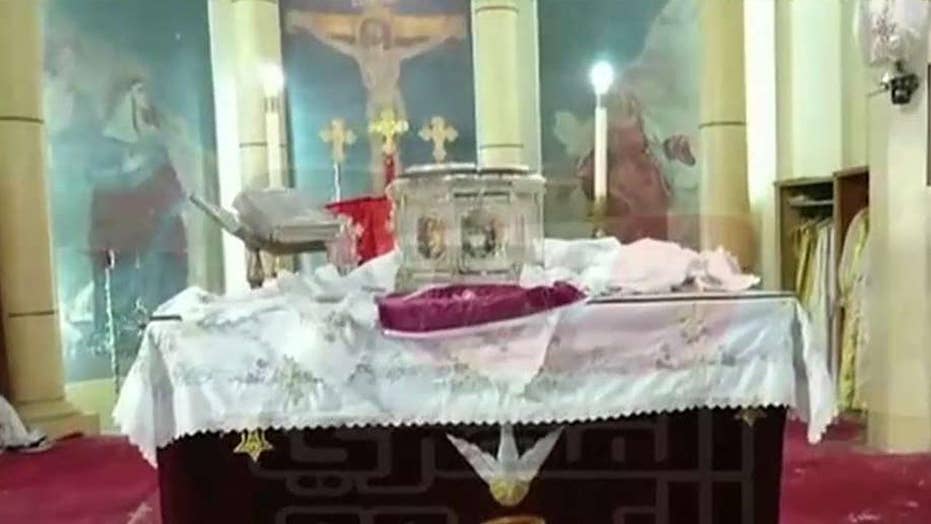 Egypt's president called for a three-month state of emergency Sunday after at least 44 people were killed and more than 100 more were injured in two Palm Sunday suicide attacks at Coptic Christian churches, each carried out by the ISIS terror group.

Sunday's first blast happened at St. George Church in the Nile Delta town of Tanta, where at least 27 people were killed and 78 others wounded, officials said.

Television footage showed the inside of the church, where a large number of people gathered around what appeared to be lifeless, bloody bodies covered with papers.

A second explosion – which Egypt’s Interior Ministry says was caused by a suicide bomber who tried to storm St. Mark's Cathedral in the coastal city of Alexandria -- left at least 17 dead, and 48 injured. The attack came just after Pope Tawadros II -- leader of the Coptic Orthodox Church of Alexandria -- finished services, but aides told local media that he was unharmed.

At least three police officers were killed in the St. Mark’s attack, the ministry told The Associated Press.

ISIS claimed responsibility for the attacks via its Aamaq media agency, following the group's recent video vowing to step up attacks against Christians, who the group describes as "infidels" empowering the West against Muslims.

The blasts came at the start of Holy Week leading up to Easter, and just weeks before Pope Francis is due to visit Egypt, the Arab world's most populous country.

Egyptian President Abdel-Fattah el-Sissi accused unnamed countries of fueling instability in the country, adding "Egyptians have foiled plots and efforts by countries and fascist, terrorist organizations that tried to control Egypt." El-Sisi ordered the immediate deployment of troops to assist police in protecting vital facilities across the country.

President Donald Trump tweeted that he is "so sad to hear of the terrorist attack" against the U.S. ally but added that he has "great confidence" that el-Sissi, "will handle the situation properly." The two leaders met at the White House on April 3.

The State Department issued its own statement condemning the attacks, which it called "barbaric."

"The United States will continue to support Egypt's security and stability in its efforts to defeat terrorism," the statement said.

"Either a bomb was planted or someone blew himself up," provincial governor Ahmad Deif told the state-run Nile TV channel, Sky News reported.

The attack in Tanta was the latest in a series of assaults on Egypt's Christian minority, which makes up around 10 percent of the population and has been repeatedly targeted by Islamic extremists.

Grand Sheikh Ahmed el-Tayeb, head of Egypt's Al-Azhar — the leading center of learning in Sunni Islam — condemned the attacks, calling them a "despicable terrorist bombing that targeted the lives of innocents."

Across the street from St. George, neighbor Susan Mikhail, whose apartment has a clear balcony view of the church and its front yard, said the explosion violently shook her building midmorning, at a time when the church was packed.

"Deacons were the first to run out of the church. Many of them had blood on their white robes," she told The Associated Press. Later, the more seriously wounded started to come out, carried in the arms of survivors and ferried to hospitals in private cars, she
said.

Pope Francis decried the bombings, expressing "deep condolences to my brother, Pope Tawadros II, the Coptic church and all of the dear Egyptian nation." Word of the attacks came as Francis was holding Palm Sunday services in St. Peter's Square.

Mehmet Gormez, the head of religious affairs in Turkey, "cursed" the attacks and said they are the shared problem of all humanity.

"The immunity of a place of worship, no matter the religion it belongs to, cannot be violated and the bloodthirsty killing of innocent worshippers cannot ever be forgiven," Gormez said in an official statement.

"We convey our condolences to the bereaved families and the whole people of Egypt," the statement said before a second attack hit an Alexandria church.

The bombings add to fears that Islamic extremists who have long been battling security forces in the Sinai Peninsula are shifting their focus to civilians.

A local Islamic State affiliate claimed a suicide bombing at a church in Cairo in December that killed around 30 people, mostly women, as well as a string of killings in the restive Sinai Peninsula that caused hundreds of Christians to flee to safer areas of the country. The group has threatened further attacks.

A militant group called Liwa al-Thawra claimed responsibility for an April 1 bomb attack targeting a police training center in Tanta, which wounded 16 people. The group, believed to be linked to the outlawed Muslim Brotherhood,has mainly targeted security forces and distanced itself from attacks on Christians.

Egypt has struggled to combat a wave of Islamic militancy since the 2013 military overthrow of an elected Islamist president.