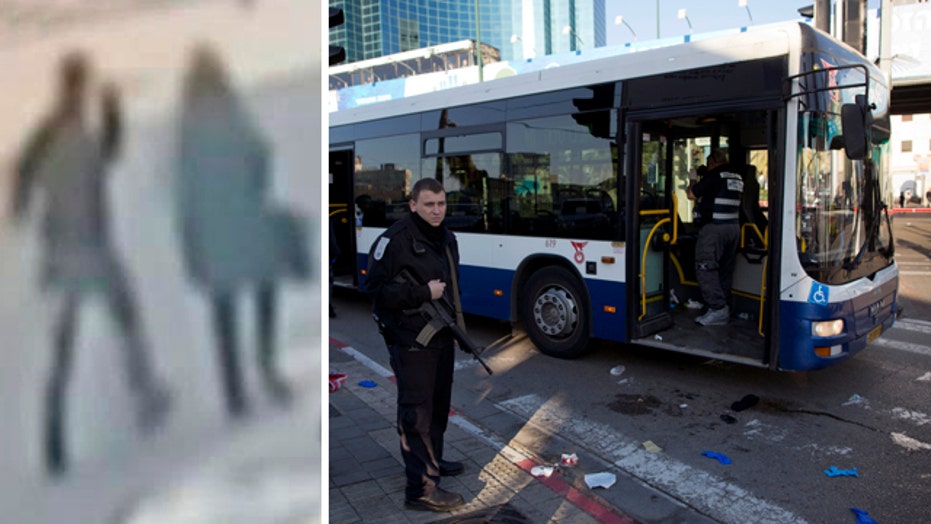 A Palestinian man stabbed 11 people on a Tel Aviv bus during the morning rush hour Wednesday before he was shot by corrections officers and taken into custody, officials said.

Israeli Police spokesman Micky Rosenfeld posted a message on Twitter saying that authorities believe the incident is a terror attack. Eleven people were stabbed and three remain in critical condition, according to Lee Gat, a spokeswoman at Tel Hashomer hospital, and a statement from the Ichilov hospital.

Rosenfeld said the suspect is a 23-year-old man from Tulkarem, located in the West Bank northeast of Tel Aviv. He said the man was being questioned by police and a heightened security presence was in effect in Israel's second-largest city. The Times of Israel reported that the suspect was shot in the leg as he attempted to flee the scene.

Tel Aviv District Police Chief Bentzi Sau said that members of the Israel Prison Service were in a vehicle behind the bus and noticed it driving erratically. Sau said officers then jumped out of their vehicle and pursued the suspect when they saw him get off the bus. He added that the suspect had crossed into Israel illegally, but did not specify how.

The stabbing is the latest in a type of "lone-wolf" attacks that have plagued Israel in recent months. About a dozen people have been killed in Palestinian attacks, including five people killed with guns and meat cleavers in a bloody assault on a Jerusalem synagogue.

Cheli Shushan said her uncle, Herzl Biton, the bus driver, was stabbed in the upper body and liver and was in surgery. She said he had tried to fight back and sprayed the attacker with pepper spray.

"He had murder in his eyes," a bus passenger who gave her name as Orly, told Israel Radio.

Biton called his friend, Kazis Matzliach, as the attack was unfolding, describing the mayhem. Matzliach said he could hear screams while his friend was talking, asking him if "something happens to me, please take care of my children."

At the scene of the attack, a Jewish head covering lay beside headphones on the floor of the bus, with blood splattered nearby. Police sealed the central intersection where the attack occurred, which is typically clogged with cars, as paramedics tended to the wounded.

Hamas, the Islamic militant group that controls the Gaza Strip, did not claim responsibility, but praised Wednesday's attack as "brave and heroic" in a tweet by Izzat Risheq, a Hamas leader residing in Qatar.

The stabbing is a "natural response to the occupation and its terrorist crimes against our people," Risheq said.

"The terrorist attack in Tel Aviv is the direct result of the poisonous incitement being disseminated by the Palestinian Authority against the Jews and their state," he said. "This same terrorism is trying to attack us in Paris, Brussels and everywhere."

Most of the violence has occurred in Jerusalem, though there have been other attacks in Tel Aviv and the West Bank.

In Jerusalem, the violence came after months of tensions between Jews and Palestinians in east Jerusalem -- the section of the city the Palestinians demand as their future capital. The area experienced unrest and near-daily attacks by Palestinians following a wave of violence last summer, capped by a 50-day war between Israel and Hamas militants in Gaza.

Much of the recent unrest has stemmed from tensions surrounding a key holy site in Jerusalem's Old City.  It is the holiest site for Jews, who call it the Temple Mount because of the revered Jewish Temples that stood there in biblical times. Muslims refer to it as the Noble Sanctuary, and it is their third holiest site, after Mecca and Medina in Saudi Arabia.

The violence comes weeks ahead of March elections, in which Netanyahu, a security hawk, is facing a challenge from a joint list headed by Isaac Herzog and Tzipi Livni, who support negotiations with the Palestinians. The attack could sway votes in Netanyahu's favor.