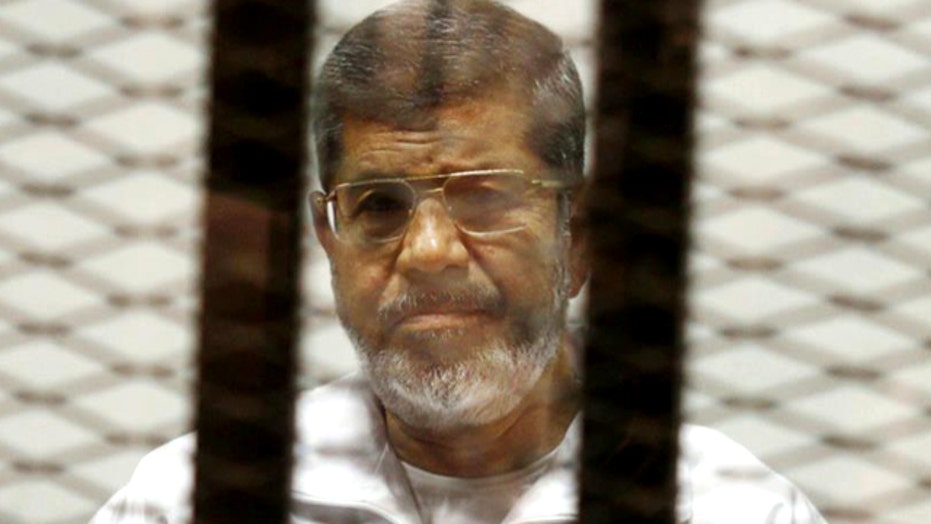 An Egyptian criminal court on Tuesday sentenced ousted Islamist President Mohammed Morsi to 20 years in prison on charges linked to the killing of protesters in 2012.

The conviction, which can be appealed, and muted Islamist reaction following it underscore the dramatic downfall of Morsi, 63, and Egypt's once-powerful Muslim Brotherhood group. However, Morsi escaped receiving a death sentence in the case, which Islamists derided as a "farce."

Tuesday’s ruling was the first verdict to be issued against the country's first freely elected leader.

Morsi and the Brotherhood swiftly rose to power in elections after autocrat Hosni Mubarak's 2011 ouster, only to find themselves imprisoned a year later when millions protested against them for abusing power and the military overthrew the government.

But as Mubarak and members of his government increasingly find themselves acquitted of criminal charges, Morsi and the Brotherhood are at the receiving end of heavy-handed sentences.

Tuesday's verdict sparked no immediate street protests, reflecting the toll of a heavy security crackdown on any show of dissent -- either by Islamists or secular-leaning activists.

During the hearing, Judge Ahmed Youssef issued his verdict as Morsi and other defendants in the case -- mostly Brotherhood leaders -- stood in a soundproof glass cage inside a makeshift courtroom at Egypt's national police academy. Seven of the accused were tried in absentia.

In addition to Morsi, 12 Brotherhood leaders and Islamist supporters, including Mohammed el-Beltagy and Essam el-Erian, also were sentenced to 20 years in prison.

Youssef dropped murder charges involved in the case and said the sentences were linked to the "show of force" and unlawful detention associated with the case.

The case stems from violence outside the presidential palace in December 2012. Morsi's supporters attacked opposition protesters demanding that Morsi call off a referendum on an Islamist-drafted constitution. Clashes developed into deadly confrontations overnight that killed at least 10 people.

In a statement, Amnesty International called the case flawed and full of loopholes, while describing the trial as "sham."

"Convicting Mohammed Morsi, despite fundamental flaws in the legal process and what seems to be at best flimsy evidence produced in court under a gag order, utterly undermines this verdict," said Hassiba Hadj Sahraoui, Amnesty's deputy Middle East and North Africa director.

Morsi's questioning took place without his lawyers present during his detention in an undisclosed location for four months following his ouster in July 2013.

Amnesty said Morsi's legal team was only able to access case files days before the trial began. It also documented irregularities, such as where abuses of his supporters -- not his opponents -- were the only evidence documented. The court also ignored what Amnesty said were deaths among Morsi's supporters during the same protests.

During Tuesday's hearing, Morsi and the rest of the defendants in white jumpsuits raised the four-finger sign symbolizing the sit-in at the Rabaah al-Adawiya mosque, where hundreds were killed when security forces violently dispersed the sprawling sit-in by Morsi's supporters on Aug. 14, 2013. They also smiled for cameras filming the hearing.

It was a far cry from when the trial first began, when Morsi repeatedly shouted to the court: "I am the president of the republic!"

During subsequent court appearances, Morsi and other defendants turned their backs to the court when Youssef played several videos of the clashes outside the palace in 2012.

From his exile in Istanbul, top Muslim Brotherhood figure Amr Darrag called the ruling "a sad and terrible day in Egyptian history."

"They want to pass a life sentence for democracy in Egypt," Darrag said.

Under the government of President Abdel-Fattah el-Sissi, who as army chief overthrew Morsi, Brotherhood members and Islamists have faced trials that end with mass death sentences, sparking international condemnation.

The heavy sentences have raised questions about the independence of Egypt's judiciary, something analysts say could have contributed to the sentence Morsi received Tuesday.

"Morsi's trial gripped international attention and a heavy sentence would have put the judiciary under a spotlight," said Sameh Eid, a former Brotherhood member who researches Islamic movements. "Today, the judiciary seemed keen in preserving its image."

Yet, average Egyptians have seen the differences between the trials of Morsi and Mubarak, political science professor Hassan Nafaa said.

"People are not reassured of the fairness of these trials," Nafaa said.

Morsi faces four other trials on charges that vary from undermining national security by conspiring with foreign groups and orchestrating a prison break. Thousands of Brotherhood members are in jail facing a variety of charges, most linking them to violence that followed Morsi's 2013 overthrow.

On May 16, the Cairo Criminal Court will issue a verdict in the jailbreak trial, according to Egyptian newspaper Al-Ahram.

Prosecutors say Morsi and other Muslim Brotherhood leaders were illegally freed from the Wadi El-Natroun prison during the 2011 uprising, with help from the Palestinian militant group Hamas. Morsi allies claim they left the prison because police abandoned their posts, The Guardian reports.

Morsi is currently being held at a high security prison near the Mediterranean city of Alexandria. Tuesday's hearing took place amid heavy security, as hundreds of black-clad riot police deployed at the police academy, backed by armored vehicles.