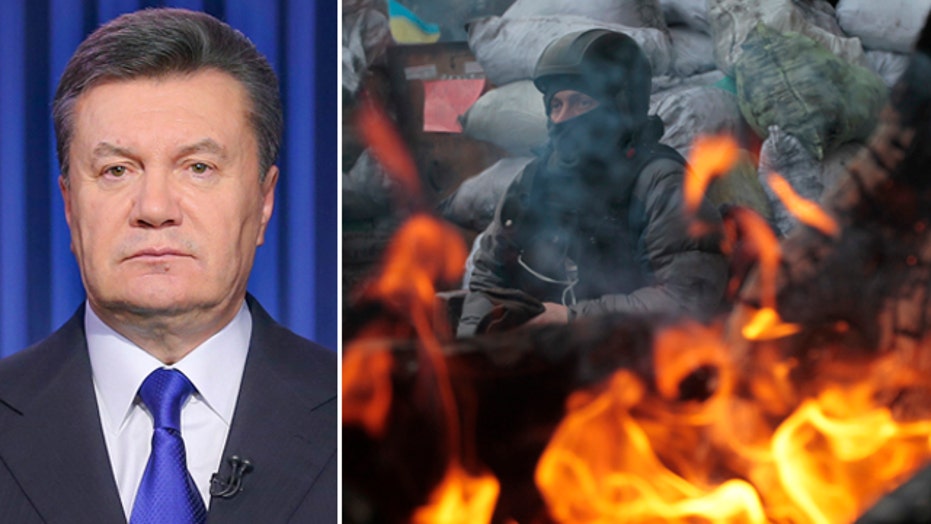 Ukraine crisis: 'This is not an uprising, this is war'

Shots rang out and tension remained high in the streets of Kiev Friday, as Ukrainian protest leaders signed a deal with Ukraine's president to defuse a political crisis that has left scores dead and hundreds injured.

After hours of European-led negotiations, Ukrainian President Viktor Yanukovych signed an agreement with opposition leaders Friday that calls for early elections, a new constitution and a new unity government. The deal promises presidential elections will be held no later than December, instead of March 2015 as scheduled.

Many protesters say December is too late -- they want Yanukovych out immediately.

Ukrainian authorities also will now name a new government-- including opposition figures --within 10 days. The deal says the government will not impose a state of emergency and both sides will refrain from violence.

It's a "good compromise for Ukraine. Gives peace a chance. Opens the way for reform and to Europe. Poland and EU support it,'' European Union mediator, Polish Foreign Minister Radoslaw Sikorski, said in a Twitter post Friday.

The Ukrainian parliament approved amnesty for protesters involved in the violent months-long standoff, following the agreement Friday.  The parliament also voted to restore the 2004 constitution that limits presidential powers, clawing back some of the powers that Yanukovych had pushed through after being elected in 2010. Although Yanukovych retains an apparent majority in parliament, his powers are now significantly reduced.

Yanukovych gave in to pressure from European diplomats, offering concessions-- including elections-- and promising to invite the opposition into the government, in an attempt to end the violence.

Opposition leader Oleh Yaroslavovych Tyahnybok says one condition of the agreement was that the present interior minister and prosecutor-general be excluded from any interim government, Reuters reported, citing Interfax.

Russian officials immediately criticized the deal and protesters angry over police violence showed no sign of abandoning their sprawling camp in central Kiev. While opposition leaders agreed that protesters should hand over any weapons and withdraw from occupied buildings and protest camps around the country, it’s far from clear whether the thousands of demonstrators camped out in Kiev Friday will go home.

One by one, protesters took to a stage on Independence Square to say they're not happy and didn't get what they wanted.

A statement on the website of the Health Ministry said 77 people had been killed between Tuesday morning, when the violence began, and Friday morning. The statement said 577 people had been wounded and 369 hospitalized. Opposition sources claimed at least 70 on their side were killed Thursday. There was no way to immediately verify the figures.

European foreign ministers had stayed up all night in Kiev trying to negotiate an end to the standoff, sparked when the president aborted a pact with the European Union in November in favor of close ties with Russia instead.

The U.S., Russia and European Union are deeply concerned about the future of Ukraine, a nation of 46 million that has divided loyalties between Russia and the West.

Leonid Slutsky, the chairman of the committee in charge of relations with other ex-Soviet nations in the lower house of Russian parliament, told reporters Friday that the agreement serves the interests of the West.

"We realize where and by whom this agreement has been written. It's entirely in the interests of the United States and other powers, who want to split Ukraine from Russia," Slutsky said.

Slutsky also shrugged off claims that Russia could send its troops to Ukraine, saying Moscow will communicate with any government Ukraine has. “No matter how bad and hard to deal with the new government is for us, we will deal with it," he said. "We must learn from mistakes we have made."

Lawmaker Inna Bogoslovskaya, allied with the opposition, told The AP that December is too late for elections. "After 77 corpses yesterday ... that changes the stakes," she said. "The Maidan (protest movement) demands immediate resignation of the president instead of early elections."

Protesters will not abandon occupied buildings until after the constitution is changed, she added.

"It's completely not enough," said protester Anton Gusev, standing at one of the barricades near city hall. Referring to the election date, he said, "December or March - what difference does it make?"

At the city hall barricade, protesters were busily organizing stacks of tires. The street was crowded with people heading toward the central square.

Several regions in the west of the country are in open revolt against the central government, while many in eastern Ukraine back the president and favor strong ties with Russia, their former Soviet ruler.

In a sign of the high tensions, armed law enforcement officers tried to enter parliament Friday morning during a debate over measures to end the crisis. Shouting lawmakers pushed them out.

The report of a deal followed the worst violence yet in the confrontation between the government and protesters. Demonstrators advanced on police lines in the heart of the Ukrainian capital on Thursday, prompting government snipers to shoot back and kill scores of people in the country's deadliest day since the breakup of the Soviet Union a quarter-century ago.

Protesters across the country are upset over corruption in Ukraine, the lack of democratic rights and the country's ailing economy, which just barely avoided bankruptcy with the first disbursement of a $15 billion bailout promised by Russia.

The violence is making Ukraine's economic troubles worse. Ratings agency Standard & Poor's downgraded Ukraine's debt rating Friday, saying the country will likely default if there are no significant improvements in the political crisis, which it does not expect.