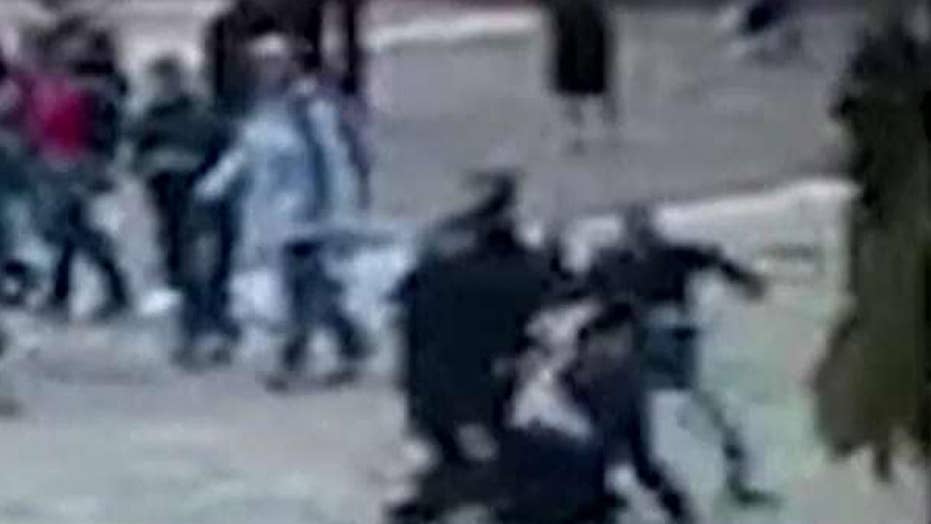 Man seen swinging at police officer before being shot

A hammer-wielding man who attacked a police officer at the world-famous Notre Dame Cathedral in Paris had pledged allegiance to the Islamic State group, Paris investigators said Wednesday.

The unnamed suspect, a 40-year-old man from Algeria, made the declaration of allegiance in a video authorities found in his apartment, France 24 reported.

Officials are classifying Tuesday's attack as a "terrorist act" because of "the words he said," French government spokesman Christopher Castaner told RTL radio on Wednesday. The unidentified man cried out "This is for Syria!" before he lunged at officers in front of the Paris monument on Tuesday. He was also carrying two kitchen knives and "other unsophisticated weapons" with him at the time.

New surveillance video released to the Associated Press showed the assailant swinging his hammer at several officers before a wounded policeman shot him. Both men were hospitalized.

The suspect was a former journalist who had been working doctoral thesis since 2014 at the University of Lorraine, college president Pierre Mutzenhardt told France Bleu radio. The university received no indication that the attacker was an ISIS fighter.

"There'd been no difficulties with him. Nothing strange had been detected," Mutzenhardt said.

His thesis director, Arnaud Mercier, also agreed there was no signs, telling broadcaster BFM that the suspect spoke Swedish, Arabic and French and that his resume mentioned that he had worked as a journalist in Sweden and Algeria, including North African media.

"He was someone who believed a lot in democratic ideals, the expression of free thinking, in journalism," Mercier said on BFM. "Nothing, absolutely nothing, foretold that one day he'd be a jihadi who'd want to kill a policeman in the name of I don't know what cause."

No group immediately claimed responsibility for the hammer attack, but Paris prosecutors opened a counterterrorism investigation shortly after the incident.

Paris has been under high security after a string of Islamic extremist attacks in recent years. In February, a man attacked soldiers outside a shopping mall near the Louvre. He was heard yelling "Allahu Akbar" before soldiers shot and injured him. Another attacker opened fire on a police van on Paris' Champs Elysees in April, killing one and seriously wounding two others. Police shot and killed the attacker in that situation.