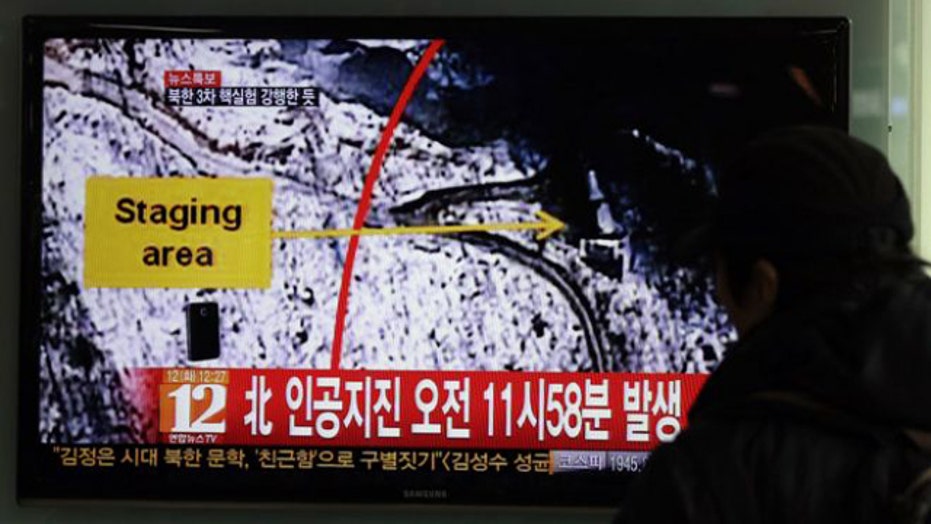 What can US do to eliminate North Korea nuke threat?

Experts say North Korea's successful detonation of a miniaturized nuclear device is concerning because it indicates the country may be getting closer to the ability to put a nuclear device on a missile.

North Korea drew worldwide condemnation Tuesday after it announced it had successfully conducted its third nuclear test, in direct defiance to U.N. Security Council orders to shut down its atomic activity or face more sanctions and international isolation.

The Security Council held an emergency meeting after the test on Tuesday morning and pledged further action.

A press statement approved by all 15 council members Tuesday said the test poses "a clear threat to international peace and security."

The council points out that in a resolution it approved unanimously last month stepping up sanctions for North Korea's missile test in December it promised to take "significant action" in the event of a new nuclear test.

"In line with this commitment and the gravity of this violation, the members of the Security Council will begin work immediately on appropriate measures in a Security Council resolution," the council said.

U.S. Ambassador Susan Rice said there are a number of further measures that will be discussed in coming days with council members and concerned states that will not only tighten existing measures but augment the sanctions regime. She added in response to a question that financial sanctions and sanctions on financial institutions are areas "that we think are right for appropriate further action."

North Korea claims its latest nuclear test on Tuesday was its "first response" to perceived U.S. threats and warns it will continue with unspecified "second and third measures of greater intensity" if the United States maintains its hostility.

North Korea expert Andrei Lankov tells Fox News that possession of such a "miniaturized" device would be necessary to create a nuclear warhead.

"It shows they are advancing their nuclear technology," Lankov said.

He also noted the significance of the timing of the test, which came just months after North Korea's successful intercontinental ballistic missile test.

"It seems they are very close to being able to put a device on a missile," Lankov said.

Peter Beck, an expert for Asia Society, tells Fox News the blast appears to be "significantly greater" than North Korea's past nuclear tests. He, too, said the test "...shows a greater commitment by North Korea to marry the missile and nuclear programs."

President Obama was one of many world leaders to speak out against the test early Tuesday, calling it a "highly provocative act" and warning that the international community would act in response.

"These provocations do not make North Korea more secure," the president said in a statement. "Far from achieving its stated goal of becoming a strong and prosperous nation, North Korea has instead increasingly isolated and impoverished its people through its ill-advised pursuit of weapons of mass destruction and their means of delivery."

North Korea's official state media said the test was conducted in a safe manner and is aimed at coping with "outrageous" U.S. hostility that "violently" undermines the North's peaceful, sovereign right to launch satellites. North Korea faced sanctions after a December launch of a rocket that the U.N. and Washington called a cover for a banned missile test. Pyongyang said it was a peaceful satellite launch.

Earlier Tuesday, South Korean, U.S. and Japanese seismic monitoring agencies said they detected an earthquake in North Korea with a magnitude between 4.9 and 5.2.

Annika Thunborg, who works for the Vienna-based U.N. nuclear monitoring agency the CTBTO, confirms to Fox News the blast was larger than past tests, measuring 4.9 seismically on the Richter scale. The country's 2006 test, which was widely seen as a failure, measured 4.1 and the 2009 test measured 4.5.

Thunborg also says they are trying to find out if enriched uranium was used in this test. This would be significant as the first two tests used North Korea's plutonium stocks which are being depleted. Uranium could be derived from a new nuclear method and those supplies could be renewed.

The North said it used a "lighter, miniaturized atomic bomb" that still has more explosive force than past tests. North Korea is estimated to have enough weaponized plutonium for four to eight bombs, according to American nuclear scientist Siegfried Hecker. However, it is not known whether North Korean scientists have found a way to miniaturize warheads.

The timing will be seen as significant. The test came hours before President Obama was scheduled to give his State of the Union speech, a major, nationally televised address. It's also only days before the Saturday birthday of Kim Jong Un's father, late leader Kim Jong Il, whose memory North Korean propaganda has repeatedly linked to the country's nuclear ambitions. This year also marks the 60th anniversary of the signing of the armistice that ended the 1950-53 Korean War.

The nuclear test is North Korea's first since Kim Jong Un took power of a country long estranged from the West.

The test will likely be portrayed in North Korea as a strong move to defend the nation against foreign aggression, particularly from the U.S., North Korea's longtime enemy.

North Korea's rocket launches and nuclear tests largely are seen by analysts as threats designed to force the United States to confront the issue of military tensions between the foes 60 years after the end of the Korean War.

Following the announcement of the nuclear test, North Korean state television played a song with lyrics bragging that the country always carries out what it is determined to do. In the background were scenes of a North Korean long-range rocket blasting off and short-range missiles being fired into the sky.

The United States and its allies have been on edge since North Korea announced last month that it would conduct a nuclear test to protest toughened sanctions over the December rocket launch.

North Korea's National Defense Commission said Jan. 23 that the United States was its prime target for a nuclear test and long-range rocket launches. North Korea accuses Washington of leading the push to punish Pyongyang for its December rocket launch.

Last October, a spokesman from the commission told state media that the country had built a missile capable of striking the United States, but did not provide further details.

The decision to push ahead with future tests will be a challenge to the U.N. Security Council, which recently punished Pyongyang for launching the long-range rocket. In condemning that launch and imposing more sanctions on Pyongyang, the council had demanded a stop to future launches and ordered North Korea to respect a ban on nuclear activity -- or face "significant action" by the U.N.

The tests will likely draw harsh censure and more sanctions from the United States and other countries at a time when North Korea is trying to rebuild its moribund economy and expand its engagement with the outside world.

North Korea cites the U.S. military threat in the region as a key reason behind its drive to build nuclear weapons. The two countries fought on opposite sides of the Korean War, which ended after three years on July 27, 1953, with an armistice, not a peace treaty. The U.S.-led U.N. Command mans the Demilitarized Zone dividing the two Koreas, and Washington stations more than 28,000 troops in South Korea to protect the ally.