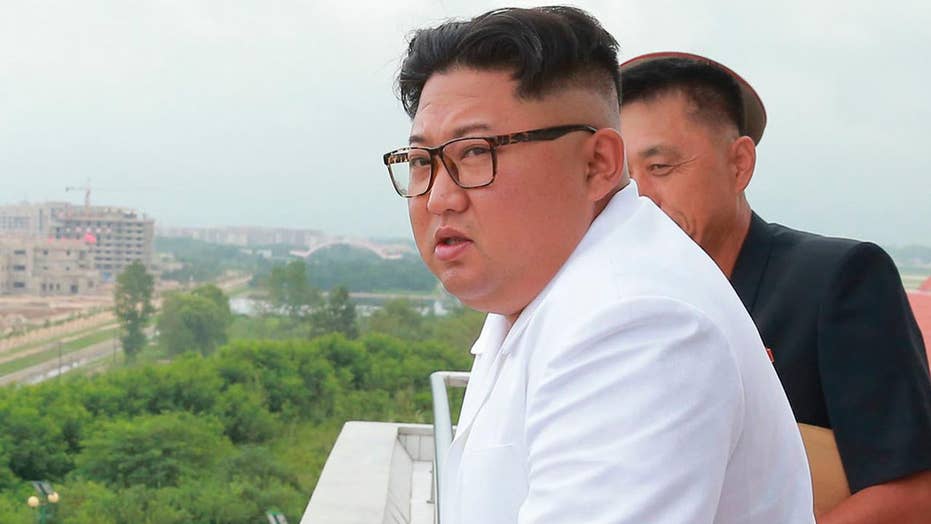 North Korean leader Kim Jong Un and his South Korean counterpart will meet later this month to discuss the denuclearization of the Korean peninsula, his state-controlled media reported Thursday.

Kim also expressed faith in President Trump efforts to settle a nuclear impasse, despite recent bumps in the diplomacy., the report said.

Chung Eui-yong, a special envoy from South Korea, told reporters that Kim stressed that "he has never talked negative about President Trump to his staff or anyone else," South Korea's Yonhap News reported.

The statement comes after a South Korean envoy met with Kim to set up the inter-Korean summit with South Korean President Moon Jae-in.

Kim was paraphrased as saying it was “his will to completely remove the danger of armed conflict and horror of war from the Korean peninsula and turn it into the cradle of peace without nuclear weapons and free from nuclear threat."

The dates of the summit were expected to be released sometime Thursday.

Kim’s commitment to a nuclear-free Korean peninsula comes amid an impasse with the United States and growing skepticism of his intent to dismantle his nuclear weapons program.

His statement raises hopes that talks can get back on track following his meeting with President Trump in Singapore.

To overcome increasing dispute between Pyongyang and the U.S., Seoul is trying to persuade both countries to proceed with the denuclearization process simultaneously.

In addition, the South is aiming for a four-nation summit that would include China, to declare a formal end to the Korean War. Many see the peace declaration as a precursor to the North calling for the removal of all U.S. troops in the Korean Peninsula.

U.S. officials have insisted that the North must first takes steps to abandon its nuclear weapons before any peace declaration. Steps include allowing outside inspections, giving up some nuclear weapons during the early stages of negotiations and providing an account of components of its nuclear program.

Experts believe an end-of-war declaration could make it easier for North Korea to move toward discussions of a peaceful regime, diplomatic recognition and security concessions.

The North has routinely accused the United State of holding back the end-of-war declaration and making "unilateral and gangster-like" demands for denuclearization.

On Tuesday, North Korea’s Foreign Ministry issued a lengthy statement where it said an end-of-war declaration would be a necessary trust-building step that would "manifest the political will to establish the lasting and stable peace regime on the Korean Peninsula."

Nuclear negotiations between Pyongyang and Washington have settled into a stalemate since the summit meeting between Kim and Trump.

Citing a lack of progress in denuclearization, Trump called of a planned visit to North Korea by Secretary of State Mike Pompeo last month.

Moon recently said the inter-Korean summit could warm relations between the Unites States, which maintains that efforts to improve relations should coincide with efforts to denuclearize the North.

"If needed, we should pull forward the negotiations for the complete denuclearization of the Korean Peninsula with the development in relations between the South and North," Chung said.

The frosty relationship between the United States and North Korea could present a tougher challenge for Moon’s third meeting with Kim, with his commitment to abandon his nuclear weapons in doubt.