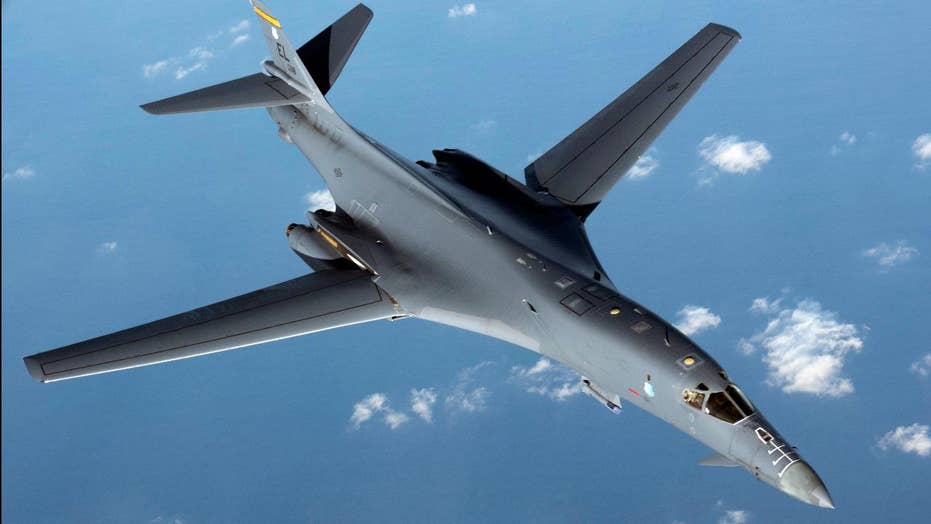 Does North Korea have capability to shoot down US bombers?

North Korea has declared war about 200 times in the past 20 years.

So Monday's chest-puffing announcement that the rogue regime was ready to shoot down American planes since it believed the United States had issued "a declaration of war," was really just par for the course, rather than the ratcheting up of tensions.

North Korean Foreign Minister Ri Yong-ho said Pyongyang had the right to shoot down U.S. bombers in its airspace. (Reuters)

"[T]his is clearly a declaration of war on all members states," North Korean Foreign Minister Ri Yong-ho told reporters on Monday. "The whole world should remember U.S. declared war on our people. The U.N. charter stipulates right of defense in charter."

Under the U.N. Charter, Ri said, North Korea has the right to self-defense and "every right" to take countermeasures, "including the right to shoot down the United States strategic bombers even when they're not yet inside the airspace border of our country."

The White House pushed back on Ri’s claim saying: “We have not declared war on North Korea.”

Ri's statement was met with instant alarm by many, and seemed to be yet another escalation in the war of words -- that threatens to explode into something more -- between the U.S. and North Korea.

The most recent time before Monday came in July, when the U.S. placed sanctions on North Korean leader Kim Jong Un and 10 other officials for “human rights abuses,” according to The Atlantic. North Korea’s news agency described the sanctions as “a declaration of war.”

Before the release of the Seth Rogen and James Franco film “The Interview” in June 2014, North Korea threatened military action against the U.S. due to the film’s plot, which revolved around a mock assassination of Kim Jong Un.

In November 2014, Sony Pictures Entertainment, Columbia’s parent company, was hacked by the “Guardians of Peace,” an organization the FBI said was linked to North Korea, USA Today reported. The group also warned it would attack any movie theater that showed the film. North Korea denied any involvement in the hacking.

North Korea has lethally targeted the U.S. before and succeeded.

The last time North Korea fired on a U.S. aircraft was in 1994, when it shot down a U.S. Army helicopter around the heavily armed inter-Korean border, killing one of the pilots and capturing the other. The surviving pilot said after his release he was pressured by North Korean officials to "confess" the helicopter had crossed into North Korea.

OTTO WARMBIER’S PARENTS OPEN UP ABOUT SON’S TORTURE BY NORTH KOREA: ‘THEY ARE TERRORISTS’

Experts told The Associated Press it was highly unlikely North Korea would attempt a similar attack today -- mainly because the country probably can't.

Amid tensions created by the North's nuclear weapons tests and threats to detonate a thermonuclear missile over the Pacific Ocean, such an attack would pretty much guarantee retaliation from the U.S. that could lead to war -- and ultimately to the ouster or death of Kim Jong Un, Du Hyeogn Cha, a scholar at Seoul’s Asan Institute for Policy Studies told The Associated Press.

"The most obvious reason Ri made those comments was because North Korea simply can't tolerate such high profile insults to its supreme leadership," Cha said. It's also possible that the North is trying to fan concerns about a potential military clash in the region now so that it can win room to save face later when it tries to de-escalate, he said.

North Korea currently has about 1,300 aircraft, most of them from the Soviet Union era, The U.S. Defense Department said in 2015. The planes could face obstacles due to age and the incapacity to refuel while in the air, Park Dae-kwang, a researcher, told Bloomberg.

“It’s not easy to go beyond its airspace and shoot down the enemy’s plane without having such an in-air fuel provision system, and I don’t think the North has that yet,” Park told Bloomberg.

North Korea's central committee vows a “sacred war” against the U.S. during a rally. (Reuters)

But even on Tuesday morning, North Korea continued blasting out threats.

“Literally, the whole country [of North Korea] is permeated with the spirit to annihilate war maniac and old lunatic Trump on the earth," North Korea’s Central News Agency said.