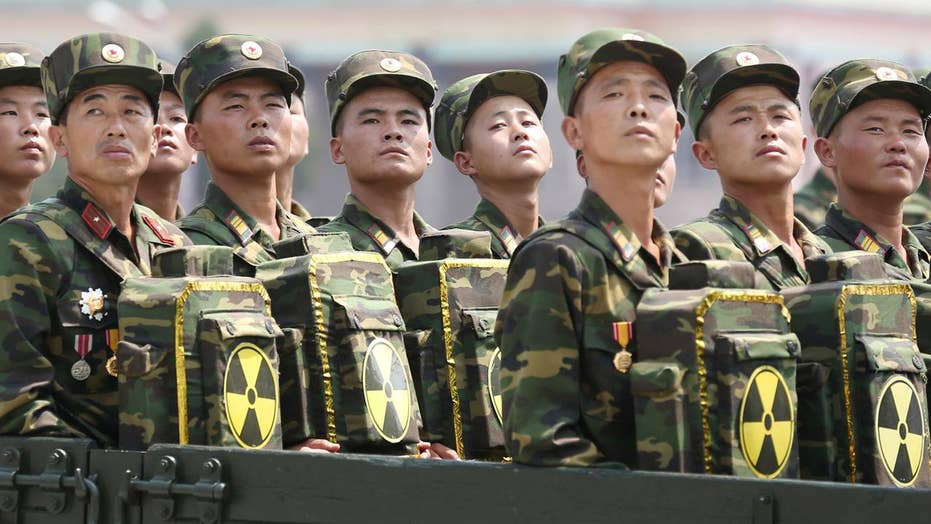 North Korea: We will go to war with US if they choose

A North Korean official said Friday that President Trump was building up a “vicious cycle” of tensions on the Korean Peninsula and that his “aggressive” tweeting was “making trouble.”

North Korean Vice Foreign Minister Han Song Ryol told the Associated Press that Pyongyang will not “keep its arms crossed” in the face of a possible preemptive strike by the U.S. Han warned North Korea will “go to war if they choose.”

"If the U.S. comes with reckless military maneuvers then we will confront it with the DPRK's pre-emptive strike," Han said. "We've got a powerful nuclear deterrent already in our hands, and we certainly will not keep our arms crossed in the face of a U.S. pre-emptive strike."

U.S. Air Force officials made it clear to North Korea Thursday they were not messing around, launching a surprise military exercise with full combat air power in Japan. The fully-armed jets were shown at Kadena Air Base.

Tensions between the U.S. and North Korea have worsened since the U.S. deployed a strike team led by the USS Carl Vinson to the waters off the Korean Peninsula. Trump has not ruled out taking military action against Pyongyang and vowed to get Kim Jong Un’s regime “under control” without China’s help.

Han blamed the U.S. for the rising tensions. Han cited the largest-ever U.S.-South Korea war games, the deployment of the aircraft carrier and Trump’s tweet that North Korea was “looking for trouble” as tipping points.

Trump is always making provocations with his aggressive words," Han said. "So that's why. It's not the DPRK but the U.S. and Trump that makes trouble."

The annual military exercises have consistently infuriated the North, which views them as rehearsals for an invasion. Washington and Seoul deny that, but reports that exercises have included "decapitation strikes" aimed at the North's leadership have fanned Pyongyang's anger.

"Whatever comes from the U.S., we will cope with it. We are fully prepared to handle it,” Han said.

According to the North Korea monitor 38 North, Pyongyang looked “primed and ready” to test its sixth nuclear missile to coincide with the 105th anniversary of the birth of North Korea’s founder this weekend.

The Saturday anniversary may provide the world with a look at some of that arsenal. Expectations are high the North may put its newest missiles on display during a military parade that could be held to mark the event.