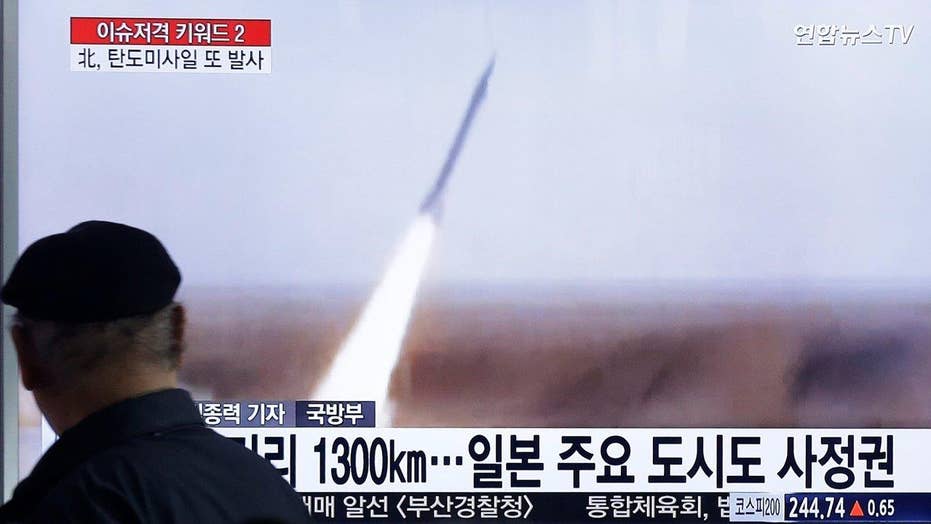 Kim, whose weight the South Korean government estimates has ballooned to nearly 300 pounds, signaled through state media that the nation could be headed for another famine like the one that killed an estimated 3.5 million people in the 1990s.

Kim, who took over after his father's death in 2012, has put on an estimated 70 pounds in the last year alone. (Associated Press)

"The road to revolution is long and arduous," an editorial in the state-run Rodong Sinmun newspaper said Monday, according to The Telegraph. "We may have to go on an arduous march, during which we will have to chew the roots of plants once again."

"Even if we give up our lives, we should continue to show our loyalty to our leader, Kim Jong Un, until the end of our lives."

"Arduous march" in North Korean is code for famine. It's how state media described the disaster that struck when Kim was a mere teen, which experts say was brought on by the economic mismanagement of his father, Kim Jong Il, loss of foreign aid and natural disasters.

But Kim, who at 33 walks with a cane and reportedly suffers from gout, won't miss any meals. Last September, South Korea disclosed that Kim appeared to have added nearly 70 pounds to his 5-foot, 9-inch frame over the previous five years, reaching an estimated weight of 290 pounds.

Kim's weight has been the subject of discussion in South Korea. (Reuters)

Photos released over the past year have shown Kim Jong Un's rapid weight gain. The secretive regime hasn't said much about it, but South Korean analysts suspect he's been under severe stress. Investigators also note that he reportedly developed a taste for Emmental cheese while he was a student in Switzerland years ago.

Pyongyang has ordered every citizen in the capital to provide around 2 pounds of rice to the state’s supplies every month, while farmers are forced to hand over additional rations from their own meager crops to the military, South Korean newspaper Chosun Ilbo reported.

Peasants in North Korea must turn food over to the government, even as they starve. (Reuters)

The comments from state media come amid reports of North Koreans hoarding their food supplies, according to The Telegraph. Kim Jong Un’s regime has been cracking down on open-air markets that have served as a source of additional food for city dwellers.

"Even if we give up our lives, we should continue to show our loyalty to our leader, Kim Jong Un, until the end of our lives," the state-run newspaper wrote, calling for a "70-day campaign of loyalty."

Much of North Korea's population of 25 million is already hungry, but new sanctions, the most severe in 20 years, were approved by the UN Security Council after Pyongyang’s February nuclear weapons test and a recent long-range missile launch.

The sanctions will further cripple North Korean trade and squeeze Kim's weapons programs. Under them, UN members are even barred from accepting the reclusive nation's main exports of coal and iron ore.

But experts don't expect Kim's belligerence to stop just because the world shuns him. The latest message to the suffering people is yet another one of collective sacrifice.

“It’s an old pattern of telling the population to endure short-term hardship for the promise of larger benefits over the long term,” Daniel Pinkston, a lecturer at Troy University in Seoul, told the Los Angeles Times of the Rodong Sinmun editorial.