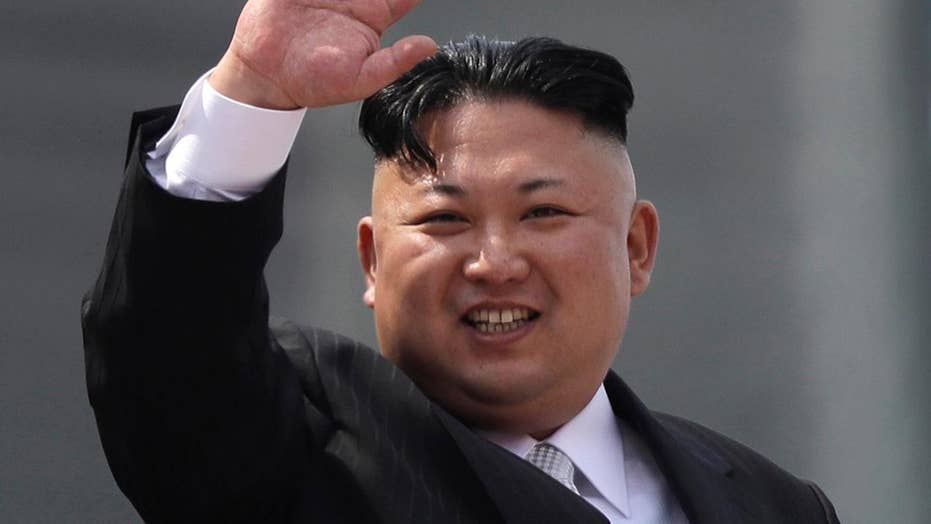 North Korea on Tuesday reportedly conducted a huge live-fire drill that involved up to 400 artillery pieces, which may have been supervised by the country’s leader, Kim Jong Un, as the U.S. added a nuclear-powered submarine to its fleet of vessels powering toward the region.

There was speculation that the North might carry out another nuclear or missile test.

News of the live-fire drill came after the USS Michigan, the nuclear-powered powered Ohio class submarine, pulled into the South Korean port of Busan for a hull check.

The USS Vinson aircraft carrier strike group made it to the Philippine Sea in waters south of Japan, according to senior U.S. defense officials.

When asked about the USS Michigan, Lieutenant commander Matt Knight with U.S. Pacific Fleet told Fox News in a statement the submarine was on "routine deployment."

"U.S. Navy ships and submarines routinely make port calls in a variety of locations," Knight said. "As a matter of routine, we do not discuss future operations or the details regarding the operations of our submarines. USS Michigan is currently on a routine deployment to the Indo-Asia-Pacific."

Meanwhile, the entire U.S. Senate has been invited to the White House for a briefing on Wednesday about the North Korea situation. White House Press Secretary Sean Spicer confirmed the upcoming briefing, for all 100 senators.

It is rare for the entire Senate to be invited to such a briefing.

South Korea’s Defense Ministry has said the North appears ready to conduct such "strategic provocations" at any time. South Korean Acting Prime Minister Hwang Kyo-ahn has instructed his military to strengthen its "immediate response posture" in case North Korea does something significant on the April 25 anniversary of its military. North Korea often marks significant dates by displaying military capability.

On Monday, Trump also had lunch with ambassadors of countries on the U.N. Security Council. Ahead of the meeting, Trump called for “big reforms” at the U.N. and criticizing its handling of recent events in Syria and North Korea – but said it has “tremendous potential.”

"You just don't see the United Nations, like, solving conflicts. I think that's going to start happening now," he said.