This week marks the 50th anniversary of when the USS Pueblo was captured by North Korea -- and the Hermit Kingdom is seizing on the opportunity to aggrandize the U.S. Navy ship’s capture as a trophy against Washington amid escalating tensions.

The ship has become a spectacle in the frozen Pothong River on the outskirts of the "Victorious Fatherland Liberation War Museum" complex in central Pyongyang, where thousands of North Koreans learn their country’s version of how, despite the odds, it was able to defeat the Americans in the Korean War.

The USS Pueblo is the only U.S. ship held captive by a foreign government, and is still officially in commission in the U.S. Naval Vessel Register.

Playing up the capture

North Korea’s state-run media is playing up the capture as it claims the U.S. is trying to disrupt North-South relations heading into next month’s Winter Olympics in South Korea.

One crewmember lost his life in the pursuit as the ship was peppered with gunfire and boarded -- an event that Americans insist took place in international waters. The 82 surviving sailors were taken prisoner and held captive in two different camps for 335 days.

North Korea claims the ship entered its territorial waters when it was attacked.

The incident came at the height of the Cold War, and set the stage for a potential serious military conflict. However, it drew to a close Dec. 21, 1968, when Maj. Gen. Gilbert H. Woodward, the chief U.S. negotiator, signed a statement acknowledging that the Pueblo had "illegally intruded into the territorial waters of North Korea" – although he disavowed that before and after.

Many of the men were crippled, malnourished and almost blind from the treatment they received during their capture.

They endured the worst of the treatment during a time the crew refers to as “Hell Week,” in which the North Koreans discovered the crew had discreetly given “the finger” in a series of staged propaganda photos. Initially, the crew said it was a “Hawaiian good luck sign."

To commemorate the anniversary, North Korea’s official news agency quoted a naval officer as saying the ship serves as a reminder for the U.S. that it will undergo a “crushing defeat” if it threatens the country’s independence. It also said a student visiting the ship felt the "pleasant sensation of a victor" as he looked at photos of the American crew. 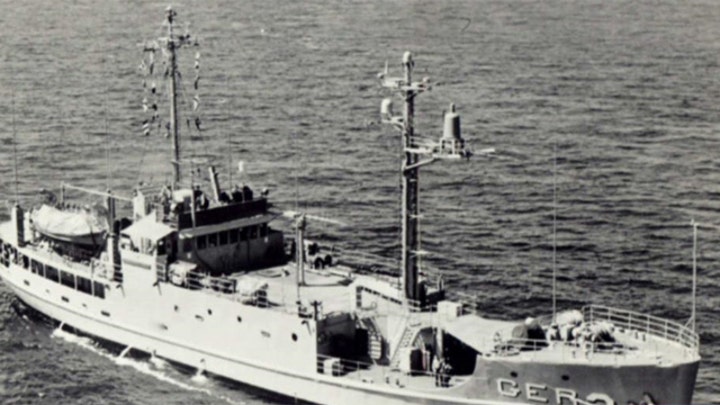 The story of the USS Pueblo went largely underreported, which has been difficult for some crewmembers to accept.

“There are a lot of people who have no idea of what we went through,” Don Peppard, an administrative assistant on the Pueblo and president of the ship’s veterans association, told Fox News. “I think we’re lost to history.”

The U.S. government didn’t recognize the crew’s sacrifice until 1989, and awarded them Prisoner of War medals.