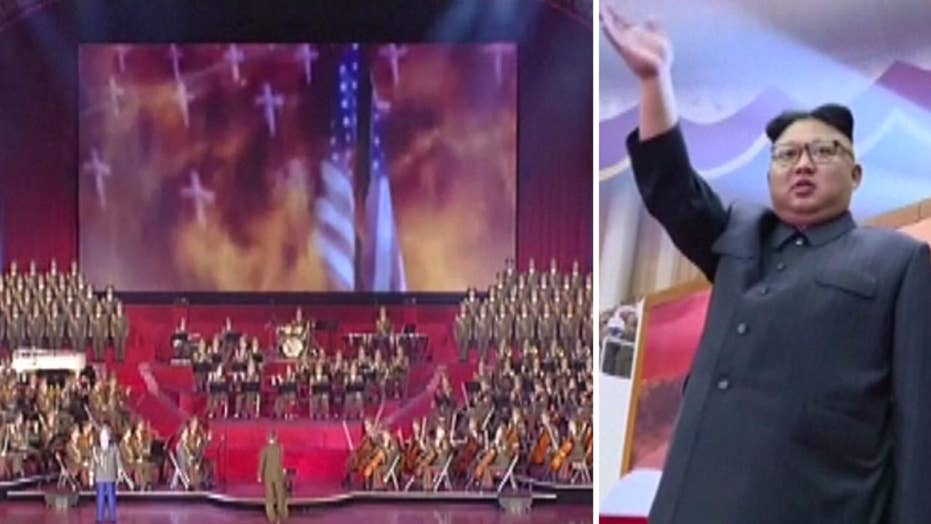 North Korean leader Kim Jong Un celebrated his grandfather’s birthday on Sunday with a rousing concert that also featured a video simulation of a nuclear missile attack destroying what appears to be an unidentified American city.

According to reports, a full orchestra played alongside the video, which depicted missiles soaring over the Pacific and engulfing a city on the U.S. west coast. The videos ends with an American flag and a cemetery superimposed with flames.

The propaganda video was reportedly received with raucous applause.

'When the performance was over, all the performers and participants in the military parade broke into enthusiastic cheers of "hurrah!",' state run KCNA news agency said, according to the Daily Mail.

North Korea has a long history of portraying mock violence against the United States in propaganda videos. Often they are released to mark national holidays.

Nearly a month ago, the totalitarian nation released a fiery video with scenes including troops blowing up a U.S. Navy aircraft carrier and bomber.

The most recent video comes amid growing tensions between the United States and North Korea. Both countries have express outrage over missile tests and massive military exercises.

Vice President Mike Pence on Wednesday warned North Korea not to test the resolve of the U.S. military, promising it would make an "overwhelming and effective" response to any use of conventional or nuclear weapons.

"The United States of America will always seek peace but under President Trump, the shield stands guard and the sword stands ready," Pence told 2,500 sailors dressed in blue fatigues and Navy baseball caps on a sunny, windy morning aboard the carrier at the U.S. Yokosuka naval base in Tokyo Bay.

"Those who would challenge our resolve or readiness should know, we will defeat any attack and meet any use of conventional or nuclear weapons with an overwhelming and effective American response," Pence said.