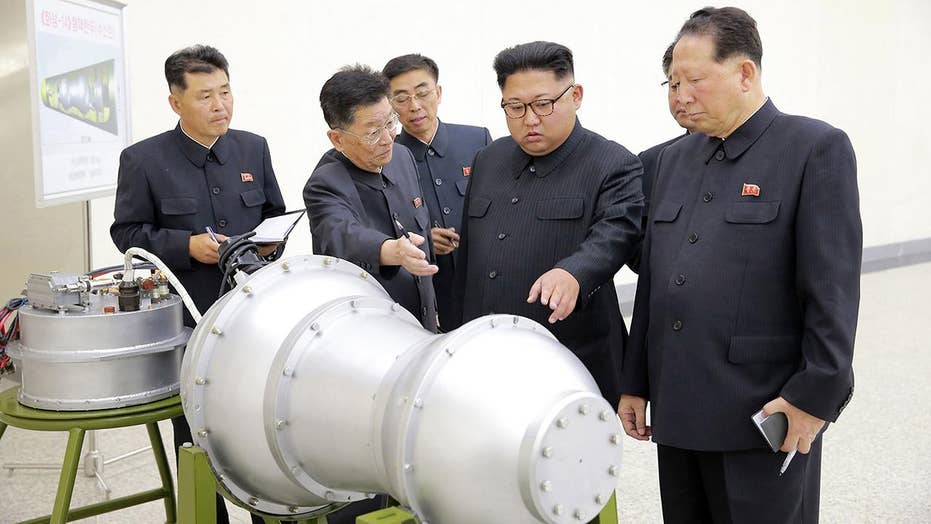 North Korea threat in focus during Trump's visit to Asia

As President Trump prepares to set foot for the first time on the Korean Peninsula, North Korea rolled out its twisted version of the red carpet, mocking Trump as a "lunatic old man" and sparking fears a missile or nuke test could be imminent.

"No one can predict when the lunatic old man of the White House, lost to senses, will start a nuclear war against [North Korea],” the regime’s state-run Korean Central News Agency said in a statement Monday. "The U.S. should not expect us to make any change."

The Hermit Kingdom, referencing dictator Kim Jong Un, said an “outstanding leader” will determine the country’s destiny. Without “distinguished leadership,” North Korea would have “fallen a victim to the invasion by the barbarous U.S. imperialists.”

North Korean leader Kim Jong Un could be preparing his country for a missile launch or nuke test. (KCNA via AP)

The statement comes as Trump heads to South Korea to begin the second stop of his five-country Asia tour. The president joined Japanese Prime Minister Shinzo Abe in Japan on Sunday and Monday, enjoying a casual burger lunch and golf -- and discussing the nuclear crisis. Trump suggested in a news conference the U.S. will arm Japan and declared Pyongyang “a threat to the civilized world.”

"No one can predict when the lunatic old man of the White House, lost to senses, will start a nuclear war against [North Korea].”

"Some people say my rhetoric is very strong but look what has happened with very weak rhetoric in the last twenty-five years," Trump said, with Abe standing next to him.

But as the president prepares to meet South Korean President Moon Jae-in, a report by a South Korean spy agency Thursday said there was “active movement” surrounding a missile research facility in Pyongyang. Vehicles were detected at the facility, renewing fears a test is imminent with Trump slated to be nearby.

North Korea's latest missile test in September flew over northern Japan before splashing into the Pacific Ocean. (KCNA via AP)

North Korea’s last nuclear and missile tests both occurred in September. Its last intermediate-range missile test flew over northern Japan before splashing into the Pacific Ocean.

Trump is expected to spend Tuesday in South Korea, but is not expected to visit the DMZ, the border that has separated North and South Korea for 64 years, because “there is not enough time in the schedule,” a senior administration official told reporters on Tuesday. Trump will instead visit Camp Humphreys, a military base about 40 miles south of Seoul.